State Assessments of Strategic Prospects for the Anti-Cuts Movement 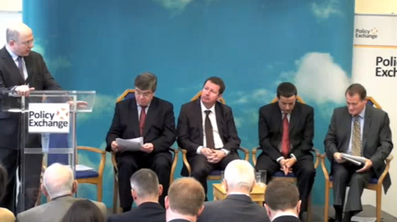 In Jan 2011 Policy Exchange UK published a You Tube video of a symposium in which policing experts and former police infiltrators discuss (according to the video description) "riots over student tuition fees, the forcible closure of high street stores by flashmobs and... growing demands for industrial action to undermine the Coalition administration". The video warrants analysis as a serious, direct and frank assessment by major State / capitalist players of government responses to the threat they face from the anti-cuts movement.

Paul Mercer's quip that injuries sustained during "six days of skiing in the Alps had actually caused more injuries than 29 years of attending riots" (8:00) sums up alot of this video, and what the video refers to as the "feral underclass" (10:35) are what everyone else refers to as the poor.

Paul Mercer confirms that on demonstrations the ability of the police to use kettling to "contain large numbers of people using considerably smaller numbers of police officers"(11:28) relies on the police's ability and willingness to (quote) "hit people" (11:54) - in other words, to commit criminal assaults (based on the unspoken assumption that the police themselves used, effectively, to be immune from prosecution under the laws they ask everyone else to follow). The video confirms that police effectiveness is being eroded by protestors using camera phones (12:55), so the police know their actions are likely to be filmed, and know "they will be prosecuted if they do something wrong" (13:00).

The video description states that "there are increasing signs that significant sections of the extreme left have little intention of confining their opposition to Coalition policies to peaceful, democratic protest", omitting to mention (either in the video or its description) that the Climate Camp protestors the police brutalised at G20 were not "extreme left", and that the assaults carried out against them were neither "peaceful" nor "democratic" (not to mention the cops killing Ian Tomlinson, assaulting disabled protestor Jody McIntyre and nearly killing Alfie Meadows), and omitting to mention the role that police thuggery plays in radicalising protestors.

Former Tory Police Minister David Maclean asks "will law breaking, direct action and violence succeed?" (15:30) and (bearing in mind my own preference is for strictly for peaceful direct action) his honest assessment is "YES IT CAN" (15:40).

Having stated that the ability to continue effective kettling is vital to police attempts to stop this from happening, David Maclean goes on to advocate aggressive policing and a "decapitation strategy" (18:50) for ring-leaders of disruptive protests (ie - advocating they be arrested promptly), in order to combat perceptions of State weakness and to pay lip-service to the idea of facilitating peaceful protest. In doing so David Maclean neatly avoids the point Paul Mercer made about how kettling doesn't work when police feel they're no longer free to attack peaceful protestors and/or free to break their own laws!

Most interestingly, David Maclean goes on to say that the government must "KETTLE THE POLITICAL DEBATE as efficiently as the Met kettles rioters" (23:05), meaning that, in order to avoid "another Poll Tax defeat for the government" (23:45) the State must prevent the anti-cuts movement achieving "critical mass" by crossing-over and engaging the majority of members of the public who aren't active in or traditionally sympathetic to activist culture.

The specific group David Maclean repeats are lorry drivers, because their protests have the ability to paralyse basic infrastructure (and it's interesting that some Trades Union activists have, very unwisely, been hostile to lorry-drivers as they're often non-unionised and self-employed, while the only group to have targeted lorry drivers and self-employed working-class people specifically have so far been the BNP). One of the main reasons we're all protesting is because the largest group of disaffected "ordinary" people are (like ourselves) the nation's NHS users - an enormous group, and this fact suggests a self-evident strategic focus for the anti-cuts movement.

The morals of this video are...

1. To remind protestors that (with the obvious caution to not publish videos of protestors faces online) we all need to use camera phones and hand-held video recorders against the police at every demo, and that protestors need to keep moving, keep watching out for police forming-up behind them and never get kettled.

2. If anti-cuts activists are willing to shed the ideological baggage, stop the sectarian flag-waving and LISTEN to (rather than lecture) non-radicals in context of mutual dialogue, we can prevent the State and right-wing media from politically kettling us into the confines of activist culture, and we can cross-over to achieve critical-mass with mainstream society - in other words WE CAN WIN (and, no disrespect to anyone who has strong ideological positions, but please, for the time being at least, leave the Communist and Anarchist flags at home - we need the TV and newspapers to show images of uniformed Nurses protesting against cuts, not uniformed Black Block).

Apologies if any of this is a statement of the obvious, and of course all of this is just my opinion. Please circulate this text!