The LGC's response to the publication of the Guantánamo Files earlier this week... + join us at our monthly demonstration "Shut Down Guantánamo!" outside the US Embassy at 12-1pm on Friday 6 May and then 1.15-2.15p outside Speaker's Corner, Hyde Park 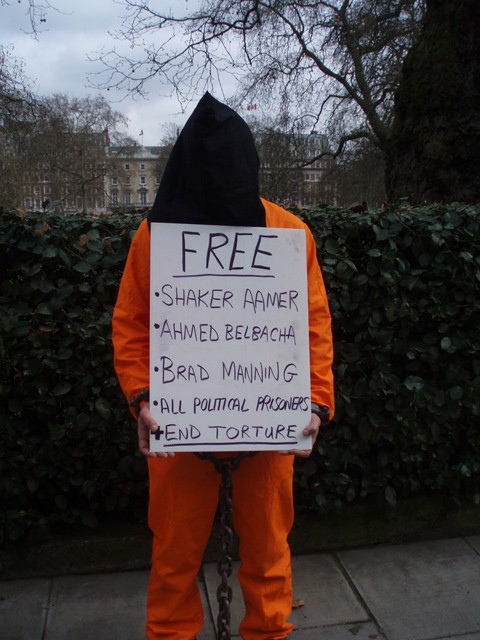 Wikileaks and Guantánamo Bay have a curious affinity: the treatment of Bradley Manning, the Welsh American US military analyst accused of leaking confidential military data (including the 800+ Guantánamo files), has been compared to that of prisoners held at Guantánamo. In an interview as part of John Pilger’s recent documentary film The War You Don’t See, Wikileaks founder Julian Assange compared Guantánamo Bay to a tax haven, “used for laundering people […] which doesn’t follow the rule of law”. Keeping with the trade in human beings, in breaking the latest Wikileaks, The Guardian referred to prisoners being sent to Guantánamo as being “shipped".


Apart from major breakthroughs, such as discovering the alleged terrorist’s choice of wristwatch, much of what is contained in the files confirms what lawyers representing prisoners and human rights NGOs have been saying all along. They have long said that many prisoners are innocent and have not been involved in any criminal activity. What emerges is the poor use and analysis of intelligence to classify prisoners and then use this as a basis for their detention. For 172 prisoners, including British residents Shaker Aamer and Ahmed Belbacha, it continues to provide a basis almost a decade on.

The flimsy nature of the evidence demonstrates why due process and fair trials have never been an option for Guantánamo prisoners. Yet almost a decade later, it also underlines the reasons why a civilised society should not sway from such principles and why they are so essential. Much of the “evidence” is mere hearsay or supposition which for the past decade has been treated as hard fact, used to detain people indefinitely and deny them their basic rights. Had recognised legal and interrogations methods been used ten years ago, the Obama administration would probably not now be facing the dilemma it does with respect to closing Guantánamo. The ill-conceived and brutal methods used have not made anyone safer.

The Obama administration has been quick to condemn the publication of these files even though they largely relate to the Bush era and make little mention of torture and other interrogation techniques or refer to the prisoners’ experiences at other prisons such as Bagram. Indeed, the prisoners’ statements are “included without consideration of veracity, accuracy or reliability”, hence there is no need to work out whether they were obtained through torture or “enhanced interrogation techniques”.

The files reveal just how little truth and justice matter at Guantánamo and no real, defensible pretext has been given for the on-going detention of over 100 men. The latest Wikileaks aside, President Obama has recently played his part in continuing the illegality of the regime at Guantánamo Bay by choosing to resume military commissions and “legalise” the indefinite detention of dozens of prisons. This is in addition to his broken promise to close the prison by the beginning of 2010.

The treatment of Bradley Manning, the joint US-UK national US army officer alleged to be the source of the leaks, shows the US government’s continuing and deep-rooted contempt for the rule of law. At the Quantico military prison in Virginia, where he was held until recently, Bradley Manning was said to have been kept for up to 23 hours a day in his cell in solitary confinement and only allowed to exercise for one hour with shackles on his legs.

With respect to both the Guantánamo prisoners and Bradley Manning, responsibility does not lie squarely on the shoulders of the American administration. The latest Wikileaks show the British government permitted the rendition of British nationals and residents to Guantánamo early on, despite claims by former intelligence heads and ministers that they had been misled by the US.

In its leading article on the Guantánamo files, The Independent states that “all real movement to close the camp has been abandoned”. Nonetheless, the London Guantánamo Campaign remains committed to working towards the closure of Guantánamo Bay and other prisons similar to it, and justice for the prisoners held there.

Both the US and UK governments claim that they would like to see Guantánamo Bay close, but their actions and words do not match up. With heads of both states due to meet in London next month as part of Obama’s official visit to the UK, now is a good time for both men to seriously discuss the closure of Guantánamo Bay.

Earlier this month, our monthly Shut Down Guantánamo! demonstration outside the US Embassy was held in solidarity with Bradley Manning. The next demonstration, outside the US Embassy at 12pm on Friday 6 May, will be in solidarity with prisoners at Guantánamo Bay, Bagram and other similar illegal detention facilities. We invite everyone to join us and make a stand for truth and justice.