http://www.youtube.com/watch?v=XAwQRsaD6KI the Nobel Peace Prize to Oslo. The president should do it before the Nobel Selection committee issues a recall. President Obama has now authorized the deployment of armed U.S. predator drones for NATO's combat operations in Libya. This weaponry has been used to target and assassinate hostile combatants in Afghanistan--it has also killed hundreds of innocent civilians including people attending weddings. In Libya the obvious target for Western assassination would be Muammar al-Quathafi 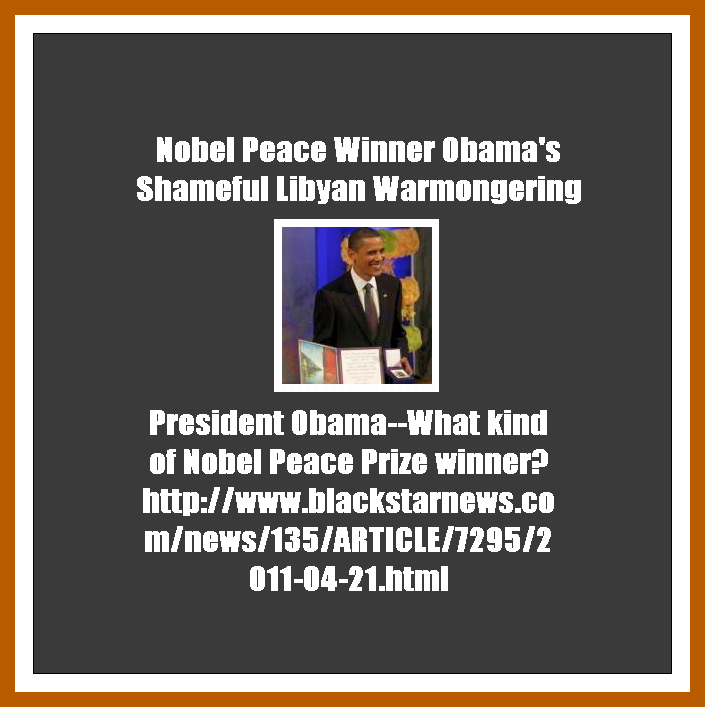 The Obama Administration's Libyan intervention could turn out to be the president's most spectacular mistake. It explains some of the decline in his support among Black voters, although still very high. Black talk radio shows have been deluged with calls denouncing the U.S.'s military role in Libya and criticism of President Obama.

President Obama also lent his signature and voice to language which called for al-Quathafi's assassination in the Op-Ed article on Libya recently published in newspapers around the world and co-authored with the war mongers French dictator Nicholas Sarkozy and British prime minister David Cameron.

The Op-Ed was cynically titled "Libya's Pathway to Peace," even as NATO bombs rained on the country. The article in part declared that al-Quathafi "must go and go for good." The only way a person goes "for good" is when they are killed. It's shameful for a United States president to call for the assassination of a foreign leader; any leader. These kind of Fatwas are unseemly for leaders of alleged democracies.

As Gen. Colin Powell famously said: If you break it you own it. President Obama now owns Libya. .... More:

http://www.blackstarnews.com/news/135/ARTICLE/7295/2011-04-21.html ...... Why insist on escalating military support for the armed forces from Benghazi that even corporate newspapers such as The New York Times --unashamed apologists for warfare acting like Benghazi's ministry of information-- acknowledge: are not disciplined; fire indiscriminately into civilian areas; sell into the illegal arms market sophisticated missile weaponry they acquire; and, carry out atrocities including beheadings and mutiliations of Black captives?

These are the forces that are expected to usher in the new dawn in Libya?

China and Russia should demand for an immediate emergency meeting of the United Nations Security Council to review the abusive implementation of Resolution 1973 which authorized the so-called "no-fly zone" which was a cover for open warfare.

Libya needs an immediate ceasefire and negotiations for a constituion and national elections. It does not the continuation of bloodshed, encouraged and financed by the insatiable oil greed of France, Britain, and the United States. "Speaking Truth To Empower."