Anti-royal wedding party in Newcastle city centre as millions are spent on Royal
wedding while £billions are cut to jobs benefits and services. 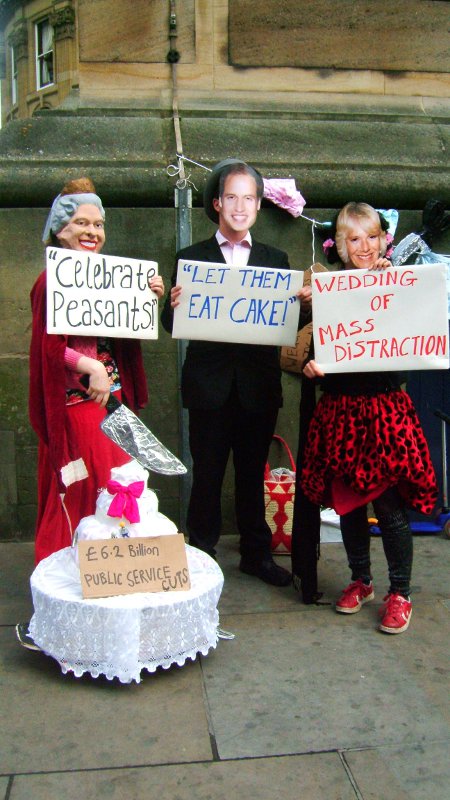 As wally william and his 'commoner' cousin from a millionaire family got married, the royals were also spotted in Newcastle.

These ones left us in no doubt about the privilege of the real royals and the contempt they have for ordinary people, as they held signs up saying 'Celebrate, peasants' and 'Let them eat cake'. David Cameron turned up brandishing scissors to make "cuts" with, and boasted that it was a wedding of mass distraction from the slashing of jobs, benefits, and services (which run to hundreds of millions in Newcastle alone).

Luckily some of us commoners had baked cakes, and a mobile sound system had turned up, so we could revolt against the disgusting royals. We handed out cakes and leaflets at Monument, and were joined by members of the public of all ages in celebrating the bank holiday (but definitely not the royal wedding!)
Almost everyone we came across (bar a couple of angry monarchists) was supportive and receptive to our message, lots of people (old and young) expressed anti-royal sentiments, but even some people who had enjoyed watching the wedding said that they supported our anti-cuts message and thought the royals should have paid for their own wedding.

Later in the afternoon we became mobile, taking the Anti-Royal Roadshow to appear outside Vodaphone, Boots, Barclays and Tescos. Even some of the royals joined in with dancing to the music, (although the Queen's head did end up on a stick, much to the delight of some passers-by!).

We were angry about the obscenity of the Royal wedding, which has been paid for from the public purse with estimates in cost ranging between £20 and £48 million (Kate's dress alone cost twice the amount of a nurses' annual salary!). This, along with other the other concessions given to the rich and privileged (like bailing out the banks, and letting Vodafone off from paying a £6bn tax bill), contrast with the cuts to jobs, benefits, and services which the rest of us are experiencing. In Newcastle, cuts to the education budget alone total £28 million, services such as Chirton House respite centre for the elderly are being closed completely, 170 staff at Newcastle College face losing their jobs, and youth services are being chopped. The government is making £6bn cuts to benefits, by among other things cutting benefits to disabled people and making cuts to housing benefit that could lead to homelessness for large numbers of people (and in the process undermining the pay and conditions of people in work). Meanwhile, security companies like G4S report record profits, and Rupert Murdoch's News Corps reported profits of $2.5 billion last year. At the same time, money is being spent on things like wars, and recommissioning Trident nuclear weapon system (estimated at over £80 billion over 25 years).


These current cuts will have a terrible impact, but they are just the latest and most visible problem. The current 'crisis' is ongoing, in a system based on putting profit before people, where the richest 1% own 40% of the world's wealth while almost half the world's population live on less than a dollar a day, and here in Newcastle almost a third of children live in poverty. Fighting the cuts is a starting point in fighting for a different way of organising and the end to a system that puts the desires of the few before the needs of the many.

And on Friday, sharing cake, music, and humour with others and talking about the cuts was a small start to doing this.