The six Iranian activists protesting against the Home Office in Croydon and central London will stop their hunger strike tomorrow (Wednesday 11 May). They are calling for supporters to join them outside the Amnesty International head office (1 Easton St, London WC1) at 12 noon tomorrow, where they will cut the stitches sealing their mouths. 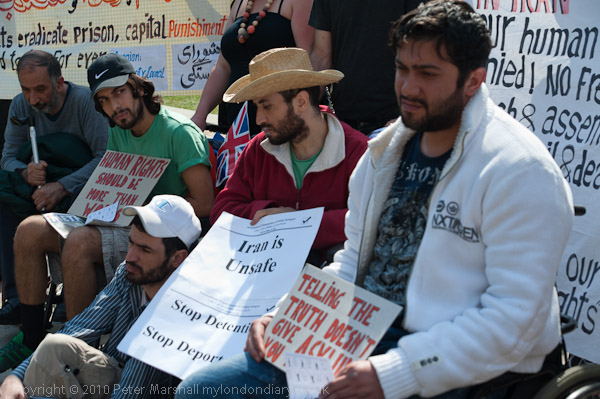 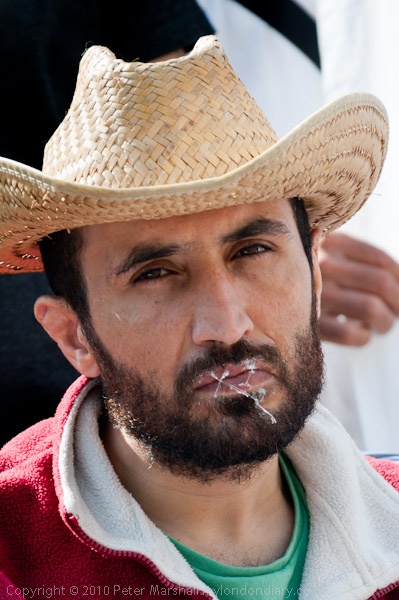 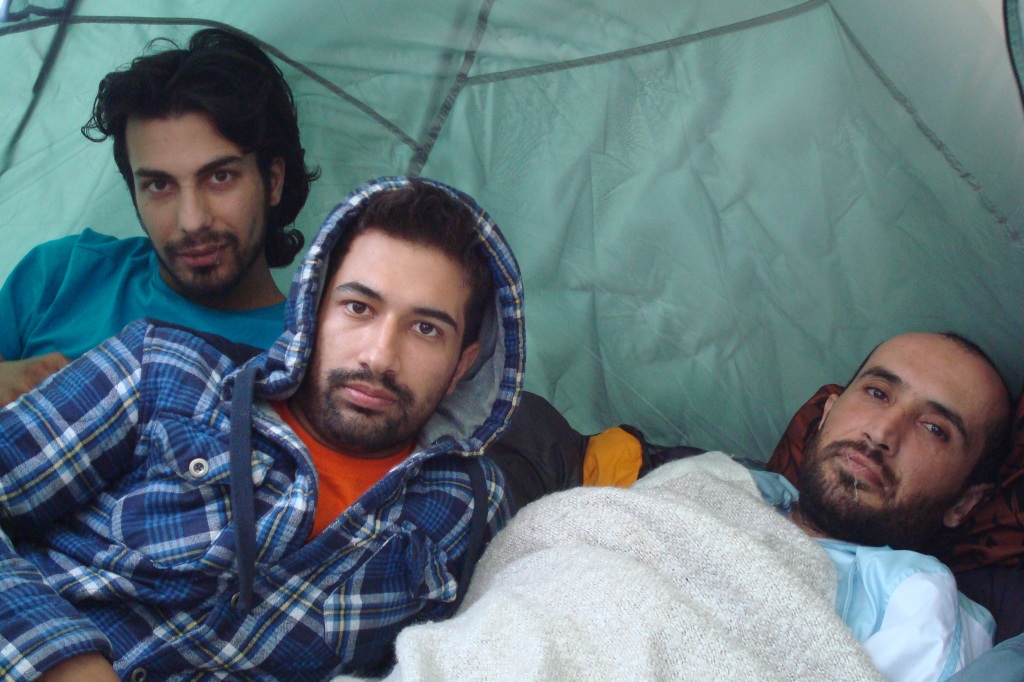 The six have now been able to submit a "fresh claim" asylum application to the Home Office, helped by a renowned refugee lawyer who has taken up their case. With the publicity and support they have gained over the last five weeks it shouldn't be easy for the government to reject their new applications. But they say they will resume the hunger strike if the Home Office does again threaten to deport them back to torture and imprisonment in Iran.

"We are stopping the hunger strike now," said Mehran Meyari, "but the fight goes on, for us and for all other refugees. We are so happy to have seen all the support people have given us."

Ahmad Sadeghi Pour, Morteza Bayat, Keyvan Bahari, Kiarash Bahari, Mahyrar Meyari and Mehran Meyari have been on hunger strike on 5 April in a last bid attempt to gain asylum in Britain. The six men were imprisoned and tortured in Iran after participating in demonstrations against the islamic regime. Mahyrar, aged 17, was raped by his torturors. The bodies of others are covered with numerous torture scars. But despite overwhelming evidence, including Iranian newspaper articles identifying them as wanted dissidents, their asylum claims were rejected by the UK Border Agency (UKBA, a department of the Home Office).

Four of the men have sewn their lips together with fishing line, saying "our closed mouths are a response to your closed eyes". All six have refused food, taking only water with salt and sugar. Three of the strikers camped outside the UKBA headquarters in Croydon, the other three outside Amnesty International in Clerkenwell. According to Mehran, the group had been considering moving to a dry hunger strike (no water), which would lead to death within a few days. According to their doctor, Frank Arnold, the hunger strike is now reaching the point where the men would be threatened with irreversible organ damage if they continue further. The ten IRA hunger strikers who died in 1981 lasted between 46 and 73 days on a similar regime of water and salt.

The six Iranians have been supported over the last weeks by activists from the No Border network and from migrant solidarity groups including Soas Detainee Support and Cambridge Migrant Solidarity. After their tent in Croydon was attacked by a drunk racist who tried to set it on fire, activists started sleeping out with the hunger strikers, building strong relationships that will continue whatever the next days and weeks hold in store. On Friday 6 May around 80 supporters joined the hunger strikers in a march to the Home Office HQ in Marsham Street. We begged and borrowed wheelchairs so they could be there to see the solidarity they had inspired.

For No Borders activists, our comrades' story is all too sadly familiar: no mere abuse of the system, this is the everyday reality of a system of abuse. As elsewhere in the Middle East, the British Government makes a show of supporting "pro-democracy" activists in Iran, and rattles its sabres against the regime. But that doesn't mean helping actual dissidents who come here looking for safety. According to the UKBA's own figures, last year it received asylum 1,870 applications from Iranian refugees; it only accepted 225. Part of a blanket policy to ignore evidence and refuse asylum claims wherever the agency thinks it can get away with it, keeping the numbers down and spreading the message that the UK is no "soft touch" on immigration.

The "culture of abuse" at the UKBA was highlighted in February 2010 by whistleblower Louise Perrett, who had worked at the agency's Cardiff office. According to Perrett, staff assessing asylum claims were instructed to accept only the most obvious and irrefutable cases; if there were any difficulties with the evidence, officers should refuse and "let a tribunal sort it out". This policy was reinforced by the racist culture within the office: any officer who approved an asylum application had a stuffed toy “grant monkey” placed on their desk by other members of staff as a badge of shame. One manager's view of the "clients" was straightforward: “If it was up to me I’d take them all outside and shoot them.” (1)


Commenting in a Guardian article on Friday's demo, the border agency says it "takes every asylum application seriously". (2) While consistently refusing to meet the hunger strikers camped outside its head office, the agency's response is now that they can submit a new "fresh claim" asylum application: but only if they travel in person to Cardiff (Perrett's former workplace) to do it. Doctor Frank Arnold says the journey would be "absolutely absurd and unsafe" given their current condition.

The six men's story also features the parasitic immigration lawyers who often prey on refugees trying to navigate the complex asylum system. When the hunger-strikers arrived in the UK in 2009, scared and traumatised from the torture cells, none of them spoke good English or could understand a system that baffles long-time campaigners. They could only put their trust in a lawyer who, it seems, pocketed his fee but never bothered to get important supporting evidence translated into English. This gave UKBA the excuse it needed to reject their case.

Reversing the supposed principle of "innocent unless proven guilty", the law treats refugees as liars unless they can categorically prove otherwise. This reversal takes place in a culture where "asylum seeker" is routinely prefixed by "bogus", where migrants have become non-people subject to a different law. They crossed the physical border, but the internal borders of law and state power keep them waiting in a limbo state, without rights, denied "access to state funds" but facing prison if they work, subject to detention and deportation at any moment. Meanwhile, parasites and profiteers from dodgy immigration lawyers to the security companies and airlines that get the lucrative contracts to run the deportation system (G4S, Serco, British Airways, BMI ... and now also Barnardo's (3)) hover all around.

The London hunger-strike is one of a number of recent actions taken by refugees all over Europe, measures of increasing rage and desperation from those dispossessed by the border system. On 6 April Iranian refugee Kambiz Roustayi set himself on fire in Dam Square, Amsterdam, after having his asylum claim refused. He died in hospital. The six week mass hunger strike of 300 migrants in Greece (a country which accepts less than 1% of asylum claims, with an asylum system so harsh that even the UK government has agreed "third country" refugees must not be deported back there) ended in March after the government agreed to grant some temporary residence permits. One hundred of the hunger strikers were hospitalised, some suffering from acute kidney failure.

Hunger strikes and self-immolations are the last means available to those who have no battleground left but their own bodies. Recent months have also seen increased acts of more active rebellion by migrants locked up in the immigration prisons known euphemistically as "detention centres". Belgium's recent flurry of detainee militancy kicked off on 20 February when one North African prisoner escaped from the "127bis" centre at Steenokkerzeel near Brussels as others set fire to cells and destroyed two wings, buoyed up by a solidarity demo outside the fences (4). The rebellion came after a week of hunger strike, which had only led to increased abuse from the guards.

In Italy, revolts spread through migration prisons across the country in March (5). Over in Australia, migrant prisoners set fire to two detention centres in two months, first Christmas Island in March, then Villawood on April 22nd. (6) The other side of the world, but with refugees from the same warzones and dictatorships being welcomed with the same repression, often managed by the same corporations. Serco, which runs Villawood, also manages Yarl's Wood detention centre in Bedfordshire.

In fact this is the other face, the other front, of the "Arab Spring". The people taking action inside the detention centres of Europe, in the city squares and outside the border offices, come from the same Middle Eastern and North African countries where people are rising up against the tyrants. The fires in Cairo and Brussels, Tehran and Sydney, are lit by the same sparks, are part of the same blaze. As anarchists and as No Borders activists we will fight alongside all those who resist tyranny, whether it attacks us with tanks and torture cells, or with the cold slow "killing by heart" of the European border system. Let's spread the fire of resistance.