On the morning of 10 May 2011, activists from Faslane Peace Camp and Trident Ploughshares successfully blockaded both North and South gates of the Faslane naval base on the Clyde, home of the four Vanguard nuclear submarines which carry Britain's Trident Nuclear Weapon. The lock-ons lasted well over two hours. 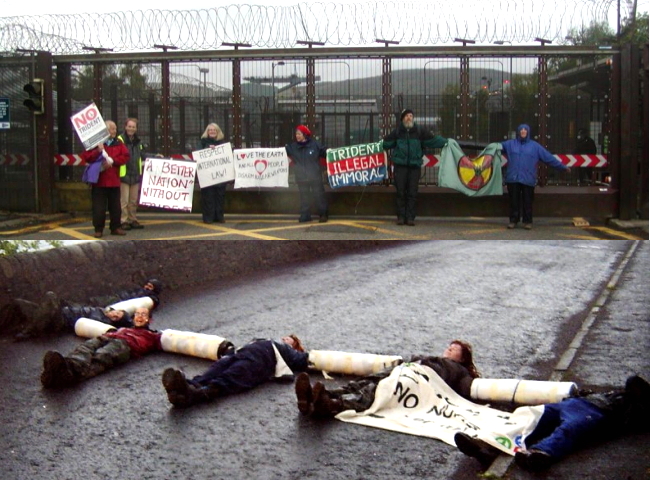 blockades at North Gate (above) and South Gate (below)

The blockade began at 7.15am and remained in place for over two hours. The BBC reported that ten people were arrested for Breach of the Peace. A Press Release issued by the blockaders called on the new SNP-led Scottish government to promptly fulfil its "manifesto promise to put pressure the UK Government to remove these illegal weapons from Scotland", to demand immediate disarmament of Trident and a global ban on nuclear weapons. The action was also part of the Faslane Peace Camp's Grand re-opening and renaissance year, which aims to build presence and resistance at the Peace Camp in the run-up to its 30th anniversary in June 2012.

Speaking on behalf of Trident Ploughshares Janet Fenton:
"Our actions here are not illegal, and are in support of the new Scottish Government. Once again the Scottish people have voted overwhelmingly in opposition to nuclear weapons. This time, there is a clear parliamentary majority for a single party with a manifesto promise to put pressure the UK Government to remove these illegal weapons from Scotland. We are seeking prompt action from the SNP, a party that has supported our actions in the past..."

Leona O'Neill , speaking on behalf of the Faslane Peace Camp:
"We the Peace Camp, are acting today to make clear our objections to a world with nuclear weapons... As citizens of a world ruled by fear, where the interests and wealth of a few are served by the subjection and poverty of the majority, we are acting to encourage the newly elected Scottish government to uphold international humanitarian law and meet our obligations under Article V! of the NPT and Article 2(4) of the UN charter. As citizens of a world suffering the aftermath of the Japanese earthquake and ongoing environmental devastation caused by nuclear technology, we are enacting our objections to nuclear weapons in our seas and the continual presence of submarines powered by nuclear reactors."

Barbara Dowling quoted the opinion of Judge Bedjaoui, President of the International Court of Justice[5], on a nuclear weapons system such as Trident:
"that deploys over 100 nuclear warheads with an approximate yield of 100 kilotons per warhead." He said "that warheads of this size constitute around eight times the explosive power of the bomb that flattened Hiroshima and killed over 100,000 civilians.... In my opinion, such a system deployed and ready for action would be unlawful."

Brian Larkin, a resident of Helensburgh said:
"The UK government, as signatory to the Nuclear Non-Proliferation Treaty, undertook more than 40 years ago to disarm its nuclear weapons, and the Scottish government formed a working group for a future Scotland without nuclear weapons over three years ago but failed to take any relevant action. The new Scottish government must demand that the UK disarm Trident. As long as the governments fail to fulfill their responsibilities under international [law] citizens have a right and duty to intervene in order to prevent crimes against humanity and war crimes... The government should redirect the resources currently allocated to Trident to meet real human needs and invest in retraining people working at the base in the skills needed to building the infrastructure for renewable energy."

As First Minister Salmond steps up to the plate so will many other Scots who want to reclaim their right to a Nuclear Free Scotland.

Let's ensure he and the others know we mean business by gathering, in traditional dress, to create music and show the new face of Scotland.

Scotland has a great opportunity to lead the way in many things by putting the wishes of the people first;

We want our children and grand-children to grow up in safety, without the fear of nuclear accidents, pollution or war...

So we'll celebrate the new beginnings of Scotland and let our voices be heard. Bring along your pipes and drums.

Now you work for us Alex and we'd like you to stick to your word.

GET TRIDENT OUT NOW!