There has been growing anger at the University of Nottingham's attempts to silence Dr Rod Thornton, author of a critical article which exposes the complicity of university management in the wrongful arrests of the 'Nottingham Two'. A student and a member of staff – Rizwaan Sabir and Hicham Yezza – were arrested as suspected terrorists in May 2008.

Dr Thornton, who was one of Sabir's tutors in the School of Politics, used information released under Freedom of Information Act and Data Protection Act requests to piece together a damning picture of the University management's attempts to cover up their wrong doing. The University used legal threats to get the article removed from the British International Studies Association website and, later the same day, suspended Dr Thornton with immediate effect.

On Tuesday 10th May, a letter calling for Thornton's immediate reinstatement, signed by 70 leading academics and scholars from across the world, including Professors Noam Chomsky, Neera Chandhoke, Paul Gilroy and Charles Tripp, was published in the Guardian. On Thursday 12th May, a protest of was held on campus. 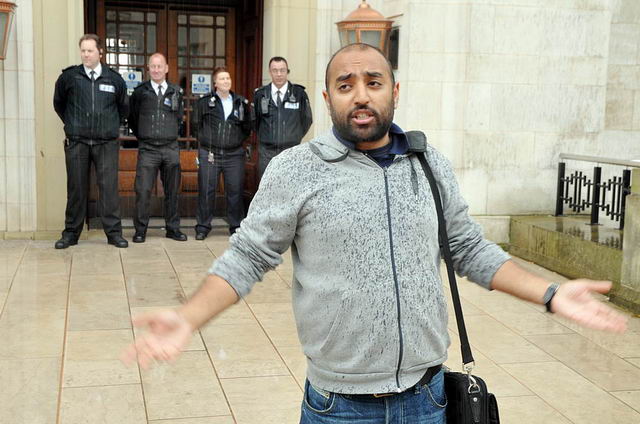 Rizwaan Sabir addresses the demonstration at the University's Trent Building

Islamophobia and the Nottingham Two, by Jeremy Bates

Rod Thornton, a University of Nottingham lecturer who became embroiled in the struggle for justice for Rizwaan Sabir and Hicham Yezza, has published his extensive account of the case of the Nottingham Two. Pieced together from heavily redacted Freedom of Information requests, Rizwaan's Data Protection Access requests and even meetings with Special Branch officers, it paints a damning picture of the University of Nottingham's management. For those who don't have the time to read the entire paper, this is an attempt to summarise what I thought were some of the most interesting sections.

Thornton is a lecturer in the School of Politics with interests in terrorism and counter-insurgency. He could be described as being the University's expert on terrorism, although his judgement was never sought by the management in assessing the legitimacy of the documents in Yezza's possession that led to the terror arrests. It is a pity because this expert knowledge could have saved a lot of suffering for the two innocent men who were wrongfully arrested and could have avoided the management embarking on an apparent crusade to see them convicted. Thornton was Postgraduate Tutor in the department and so had responsibility for the well-being of students like Rizwaan, something he seems to have done admirably whilst senior managers colluded to get rid of him.

For readers who aren't familiar with the case, I should briefly explain the series of events that led to two innocent men being arrested and questioned by police for 6 days (not to mention triggering harassment of them by police and security agencies that continues to this day). Documents were discovered by a colleague on Yezza's computer that alarmed that colleague. They included two journal articles and a document known as the Al Qaeda Training Manual (more on that later). The University authorities were alerted and it seems that the Registrar himself made the decision to involve the police. Yezza's office was sealed off whilst police made extensive searches. Sabir and Yezza were both arrested after trying to find out what was going on at Yezza's office. It emerged that Sabir, whilst researching material for his PhD on radical Islam, had emailed Yezza the documents to print on his work computer. Neither were charged in relation to the incident.

The crux of Thornton's argument is that, rather than make a thorough risk assessment to determine whether to call in anti-terrorist police, the University's Registrar and Security pre-judged Yezza and Sabir. Because they were young Muslim men, they were automatically assumed to be involved in terrorism and the possibility of their innocence was never entertained. It is not hard to find racist assumptions in the released emails and documents that Thornton has uncovered. (Take for example the assumption of Gary Stevens, Head of Security, that using the word 'brother' in an email was 'Jihadist-speak'!) The men were presumed guilty by the university, something revealed in the fact that management had drawn up a suspension notice for Sabir, signed by the Vice-Chancellor, on the day after the arrests.

There is a very interesting discussion of the Al Qaeda Training Manual contained in Thornton's paper that makes it perfectly clear that, had any expert on the document been consulted by the University authorities, a lot of misunderstanding could have been avoided. To start with it has nothing to do with Al Qaeda and is most likely the work of a radical offshoot of the Egyptian Muslim Brotherhood. Much of it seems to date from the 1950s with some additions in the 1980s. Interestingly, it's real name is Military Studies in the Jihad against the Tyrants (referring to the Presidents of Egypt) and was renamed by the US Department of Justice in order to 'sex it up' and increase the likelihood that its possession would lead to convictions! Thornton describes it as an 'insurgent/guerilla/freedom-fighter manual' with contents that 'are not actually aimed at activists who want to spread fear or "terror" – i.e. "terrorists".' Indeed, the version which Yezza was in possession of was not the full version, although Thornton helpfully points out that the full version is freely available from the University's library! It is clear from Thornton's investigations that no one from the University' senior management ever bothered to read the document in question, although they did not let that stop them from making false statements about it and judgements about those in possession of it.

After Sabir and Yezza were released, the University had to go on the defensive and protect its image which had, understandably, been damaged by its rash and destructive actions. Via a number of public statements, the senior management sought to assert its own version of events. As Thornton reveals, much of this was outright lying. The events were reconstructed to portray the University as a supportive and responsible institution and dispel the reality that senior managers had attempted to wash their hands of Sabir and Yezza as soon as possible. Indeed, the decision of the Registrar was now reimagined as a 'collective decision':
'The University had to make a risk assessment - no panic, no hysteria, just a straightforward risk assessment...Our concerns were conveyed to the police as the appropriate body to investigate (no judgement was made by us)' - Campbell,Freedom Still Reigns
Of course there had been no risk assessment, no collective decision and plenty of rash judgements.

The senior management closed ranks to protect one of their own. Once very public lies have been told they have to keep being told to maintain the fictions that they give rise to. Thornton goes into considerable depth exposing the lies that were disseminated to students and staff via the University's portal. In the meantime, staff who were critical of the management's handling of the affair were persecuted and subjected to disciplinary action, whilst those who actively colluded with management, such as Drs Macdonald Daly and Sean Matthews, were rewarded with access to what should have been confidential personal information about Sabir.

The lengths that the University went to to kick Sabir out once he had completed his Masters were extreme. Once he had got the message and realised that his interests would be best served studying elsewhere, disgusting emails were sent by his Head of Department, expressing delight at the 'good news'.

One of the most interesting revelations for myself, as a former student activist at the University, was that the university had drawn up a list of 'Events on Campus' during 2008 that, according to Thornton, included 'protests, film showings, seminars, stalls, "cultural days", meetings or presentations that related to "Muslim issues": Gaza, Palestine, talks by ex-Guantanamo prisoners, etc.' This looks like racial/religious profiling and is further evidence that the University's security were operating with islamophobic prejudice, something not helped by the fact that all of the security department are white. Thornton describes the situation at the University as one where 'any activity that is seen as pro-Muslim automatically comes to be seen by management as anti-Semitic.' A Security Report, prepared by the University, linked a silent march held in protest against attacks on academic freedom with claims that anti-Semitism was on the increase at the University.

Perhaps the most worrying sequence of events described in this paper, however, is that which led to the Home Office describing the events in Nottingham as a 'major Islamist Plot'. Vice-Chancellor of the University at the time, Colin Campbell, wrote to Universities Minister, Bill Rammell, erroneously referring to the document in Yezza's possession as an Al Qaeda Training Manual as opposed to the Al Qaeda Training Manual. Given that one is the 'sexed up' title of a relatively outdated document, unrelated to terrorism, and the other would be something useful to training an Al Qaeda recruit, this error is quite inexcusable. Campbell also lied by saying that the manual 'WAS NOT the version you can purchase from Amazon' (it was). This led to the Department for Business, Innovation and Skills (BIS) repeating these errors/lies and others including the 'fact' that Sabir was arrested for trying to interfere with the police removal of Yezza's computer (pure fiction). Soon, the story was not one of a terrible mistake which led to two innocent people being wrongfully arrested, but what the Home Office described as a 'major Islamist plot'. Like many other events that have been described as such, it was nothing of the sort.

Thanks to Rod Thornton's sense of justice and refusal to give in, the Kafkaesque twists of the Nottingham Two's story are now in the public domain. The full paper is well worth reading for those interested in corruption and racism in public bodies. It serves as a perfect illustration of the damage that the 'war on terror' has unleashed in our society.