In the face of massive cuts to Oxfordshire's public services, a group of activists and campaigners are determined to fight the Con-Dem government's austerity package and their plans to privatise services that should rightly belong to all of us.

The group has recently campaign on youth services, NHS reforms, and welfare reforms for people with disabilities. 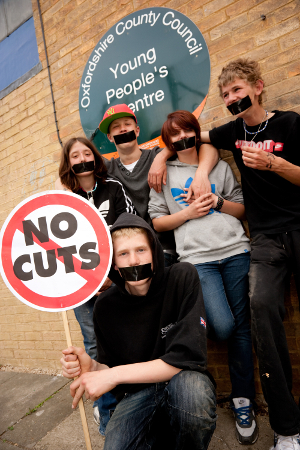 Young people don't feel they have been listened to

Oxford Save Our Services has recently run a high profile campaign to oppose the destruction of youth services across Oxfordshire. The campaign was run in partnership with Save All UK Youth Centres - a youth led campaign. The campaign combined a range of lobbying activities and awareness raising stunts. Despite huge public support and high media attention, Oxfordshire County Council voted the cuts through. The council has said it will now consult young people on the future of youth centres. The bare faced cheek of the council is stunning. Over the last few months young people have been telling the council "Don't close our youth centres, and don't get rid of youth workers." This is exactly what the council have done, and are now saying to young people "What do you want? We are listening."

Saving the NHS has also been a hot topic for the Oxford SOS group. Following on from the Big Society Hospital street theatre in Cornmarket in March there are now plans to revamp the campaign with a new campaign starting with a new piece of theatre on 28 May. Details will follow soon. There was also this great video produced that shows what the reforms would mean.

Oxford SOS has also been forming links with the My Life My Choice group. My Life My Choice are an Oxford based organisation run by and fighting for the rights of people with disabilities. Changes to the Disability Living Allowance (DLA) and other reforms are set to hit disabled people extremely hard. Oxford SOS is working to highlight the impact of these changes (e.g. see the video on Jacques & Marie's story), with a view to developing a longer term campaign.