Members of Action Against Agrofuels blocked the two sole access roads to Grangemouth docks yesterday, in protest over Forth Energy’s plans to build a biomass (wood) burning power station at the docks. The company, which is co-owned by Forth Ports, plans to build four large biomass power stations across Scotland [1]. Activists blocked off traffic to the entire port and fuel tankers were at a standstill. Seven protesters were arrested. 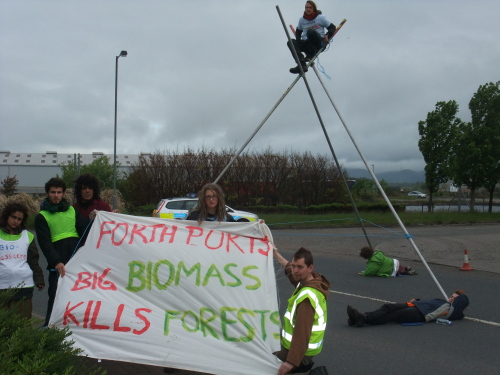 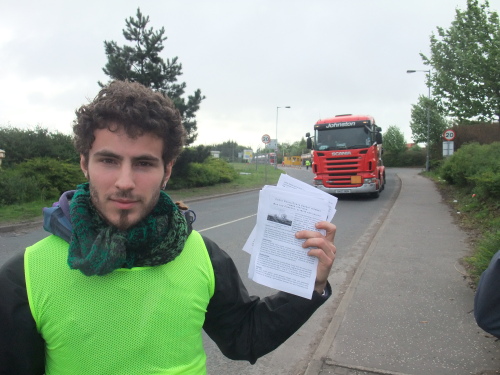 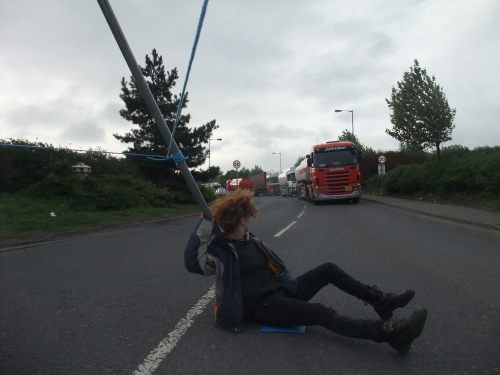 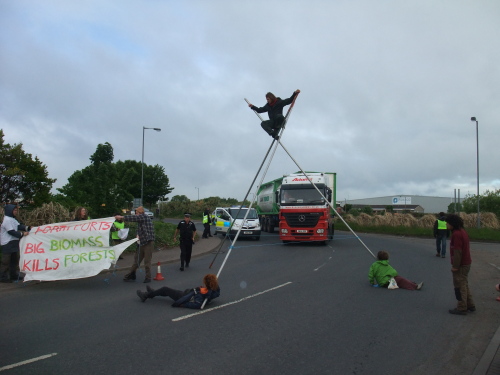 Protesters blockaded the port from 7.45 in the morning. At the North Shore entrance, they used a 20 foot high tripod made of scaffolding poles. One of the protestors sat on top of the tripod for over seven hours before being finally removed by police. Two other protesters necklocked themselves to the tripod.

At the South Shore entrance, five protestors used lock on tubes to lock their arms together in a circle. Four of them were later arrested after being cut out by police. The protesters are being held at Falkirk Police Station and are expected to appear in court on Tuesday.

The blockade meant no lorries or other traffic could enter or exit the port.

Action Against Agrofuels are protesting both against the Forth Energy’s plans, which threaten forests, climate and people and against the Government’s biomass subsidies under which the company will receive £300 million a year for the four power stations.

Johnny Agnew from Glasgow, one of the protestors states: “Vast renewable energy subsidies, paid through all our fuel bills, are being offered for big biomass, which causes more climate change, more deforestation and more pollution. We are effectively subsidising ecocide.”

Kimberley Ellis from Dundee, another protestor says “We’re putting our bodies in the way today because the government seems is overriding concerns of deforestation, human rights abuses and accelerated climate change associated with the biomass stations.”

Alister Coutts from Aberdeen adds: “Forth Energy claim that their biomass will be sustainable, but there is nothing sustainable about creating such a vast new demand for wood. A demand on this scale will lead to the destruction of forests and other ecosystems, exacerbates climate change and is linked to the displacement of communities and indigenous peoples. In Scotland it will lead to health problems associated with local air pollution. “

Forth Energy’s four planned power stations would between them consume the equivalent of two thirds of all the wood the UK produces annually. Increased demands for biomass is leading to the destruction of old growth forests including rain forests, which are then replaced by industrial tree plantations such as eucalyptus. Industrial plantations lead to the depletion and pollution of water and soils and they are linked to the displacement and evictions of communities in the South.

The world’s forests help regulate weather patterns and protect us from climate change. Because they destroy forests, biomass power stations are even worse for climate change than burning coal. Far from being a ‘green’ energy source as the Scottish Government claims, biomass power emits 150% more CO2 than coal.

Although nearly 1,000 local people in Grangemouth have objected and the local authority has voted against the plans, they will have little say in the Government’s decision. Local impacts will include significant air pollution in an area with high levels of pollution already, and serious threats to marine life in a protected nature area.

Scotland has an abundance of indigenous natural resources. We need real climate solutions including energy efficiency and true renewables such as wind, solar, wave and tidal.

- [1]The four power stations which will produce a total 530MW will burn a total of 5.3 million tones of wood a year. They will be at Rosyth, Leith, Dundee and Grangemouth. The annual UK wood production lies around 8.4 million tonnes per annum.

- The four power stations would burn approximately the equivalent of 2/3 of all the wood the UK currently produces every year.

- The UK’s total demand for wood for pulp, paper and biomass is already altogether unsustainable as the UK relies on net imports for over 80% for its wood and wood products.

- The Firth of Forth is a Site of Special Scientific Interest, an SPA (Specially Protected Area), Natura 2000 and RAMSA wetland. Friends of the Earth has shown that European biomass imports have already led to neo-colonial land grabbing in Africa