Africa: Battleground For NATO's 21st Century Strategic Concept ......... NATO the military arm of world fascism -- leading NATO analyst Rick Rozoff takes a look at some of its plans ... The war by major North Atlantic Treaty Organization member states against Libya is in its third month and has been conducted under the official auspices of NATO for the past fifty days. According to the military bloc’s daily online tally [1], Alliance military aircraft have flown over 7,200 missions and more than 2,800 combat flights since NATO inaugurated so-called Operation Unified Protector on March 31. 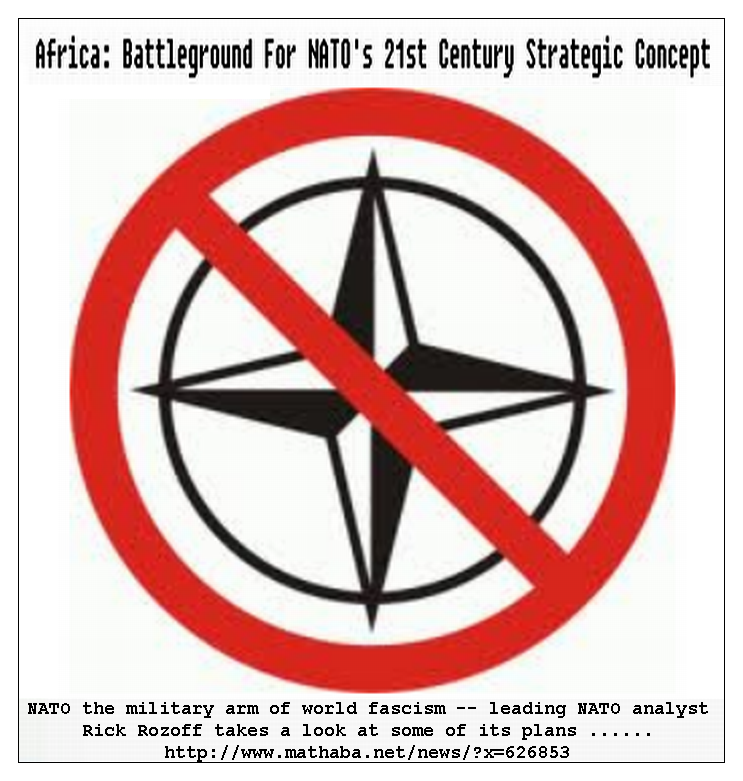 The world’s only military alliance stands to match or exceed the 78-day duration of its air war against Yugoslavia in 1999 if not to deploy troops in Libya in what could expand into protracted combat and occupation roles like those in Afghanistan and adjoining nations where the Pentagon and NATO will mark the tenth anniversary of their invasion this October 7.

Recently Russian Deputy Foreign Minister Alexander Grushko “Pointed out that the operation in Libya is becoming the first actual litmus test for NATO’s new strategic concept,” [2] a reference to the latest Strategic Concept adopted by the 28-nation alliance at its summit in Lisbon, Portugal last November, the first in this century and since that endorsed at the Washington summit in 1999 when NATO was waging its first war (against Yugoslavia) and incorporating its first post-Cold War recruits (the Czech Republic, Hungary and Poland).

The war against Libya was also the test case for U.S. Africa Command (AFRICOM), the first overseas military command launched by the Pentagon since the end of the Cold War (its predecessor, Central Command, was created in 1983), whose Joint Task Force Odyssey Dawn was in charge of bombing runs and cruise missile attacks in and a naval blockade of Libya from March 19-30.

The activation of AFRICOM as an independent command on October 1, 2008 and the expansion of NATO into Africa were integrally, inevitably related developments, as the top military chief of U.S. European Command, to which almost the entire African continent and the nascent AFRICOM were for years assigned, and NATO’s Supreme Allied Commander Europe are and for almost 60 years have been the same person, currently America’s Admiral James Stavridis. ...........

http://www.mathaba.net/news/?x=626853 ......... The blueprint for a 21st century global expeditionary NATO also affirms: “Crises and conflicts beyond NATO’s borders can pose a direct threat to the security of Alliance territory and populations. NATO will therefore engage, where possible and when necessary, to prevent crises, manage crises, stabilize post-conflict situations and support reconstruction. Where conflict prevention proves unsuccessful, NATO will be prepared and capable to manage ongoing hostilities.”

“Unique in history, NATO is a security Alliance that fields military forces able to operate together in any environment; that can control operations anywhere through its integrated military command structure; and that has at its disposal core capabilities that few Allies could afford individually.”

After launching a full-scale war against a European nation for the first time since the end of World War II in Yugoslavia in 1999 and joining the U.S. in Afghanistan two years later in what is now the longest war in the world, NATO is putting its new global military doctrine into brutal and deadly effect in Africa.