The Sunday Herald has named Ryan Giggs as the footballer causing all the current stink about superinjunctions. It claims that Scottish press are not subject to the superinjunction. 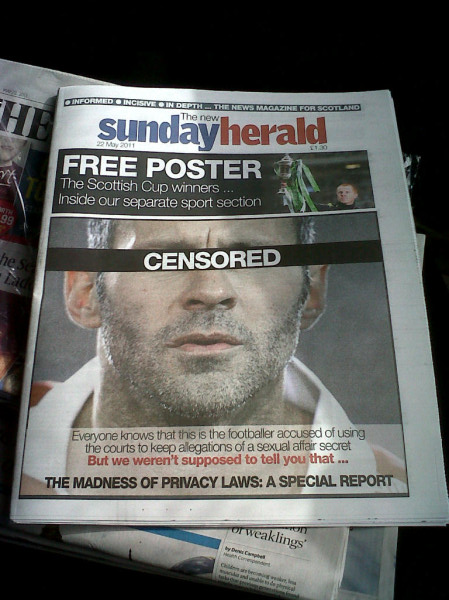 In recent days there has been a lot of public attention on superinjunctions, in particular the case of Ryan Giggs, the footballer who reacted angrily when his superinjunction was broken and went viral on social networking site Twitter. The internet was shown once again to be infinitely more powerful than out-of-touch judges abusing their positions. However today the Sunday Herald, a Scottish newspaper, has caused a storm by "outing" Giggs on its front page, claiming that as a Scottish newspaper the superinjunction does not apply.

The Scottish paper plastered a picture of Giggs across its front page with a black band labelled "censored" across his eyes. A caption reads:

"Everyone knows that this is the footballer accused of using the courts to keep allegations of a sexual affair secret. But we weren't supposed to tell you that ... the madness of privacy laws: a special report"

The person who posted the name Ryan Giggs has now apparently been identified as a famous TV presenter, now facing potential legal proceedings. The first use of a scary new power is always frivolous but as ever, the day will very soon come when these powers are used to silence dissent. The legal backing to these powers is now being dragged into the public eye, challenged and humiliated. Although the motivation is contrived, for once I'm very proud of the corporate media!

This is none of our business

If Ryan Giggs had an affair with an attention-seeking Big Brother contestant then this is none of our business - it is between himself, his wife, and Imogen. This is in no way in the public interest. These rags don't want a privacy law purely because they know that prurient stories like this sell newspapers - no other reason. This is just the gutter press in action.

it is important to us = but not because of the footballer or the woman. the core issue here is privacy - and whether that's something you can buy, or something that one is entitled to.

Make the law protect eveyone, then

right to out giggs

It's right to out ryan giggs because all these rich people think that they are above the law and can buy their way out of everything. If you accept sponsorship money e.t.c. then you better lead a moral life and not commit adultery. The girl is a very plain girl , look down any high street you'll see a hundred girls as pretty. Keep in your trousers ryan. I bet your lawyers are laughing all the way to the bank you ignoramus !

Of course it's all of our business

Let's not pretend this story is nothing but celeb gossip trivia. It's an insight into the workings of the judicial system, their independence to make up law as they go along, and their lack of hangups about selling privacy for cash.

If some embarrassing story about my private life is judged by the media to be a cash crop, I am powerless to stop them from printing it because I'm not rich. It is inconceivable that any judge would move to prevent the media from ever embarrassing anyone again, so this is purely a mechanism for deciding who deserves privacy. And the answer is clear - the rich deserve privacy, the poor are for laughing at.

Obviously the media are contrived in their motivations - the original article states that very clearly. But there are very important symbolic ramifications in the present, and very ominous potential ramifications soon to come. Unless the law has changed recently, a company has the same legal status as a person - definitely the same right to protection by the law. What happens when a judge grants RBS a superinjunction over any bad press regarding the economic meltdown? In the public interest is entirely subjective, and make no mistake they that make the decisions will be all too aware of this as they desperately scramble to protect the society crumbling around them.

A right to privacy the legal profession attempted to create behind parliament's back - for those who can afford it.

>> t's right to out ryan giggs because all these rich people think that they are above the law and can buy their way out of everything. If you accept sponsorship money e.t.c. then you better lead a moral life and not commit adultery. The girl is a very plain girl , look down any high street you'll see a hundred girls as pretty. Keep in your trousers ryan. I bet your lawyers are laughing all the way to the bank you ignoramus !

>> A right to privacy the legal profession attempted to create behind parliament's back - for those who can afford it.

Therefore, by your arguments, you should have all your legal rights took away because you are rich.

If this was about providing homes to the homeless, then Ryan wouldn't have that need, somebody else would who needs more than everyone else. You going to pick on that person too? Just because they need more than you?