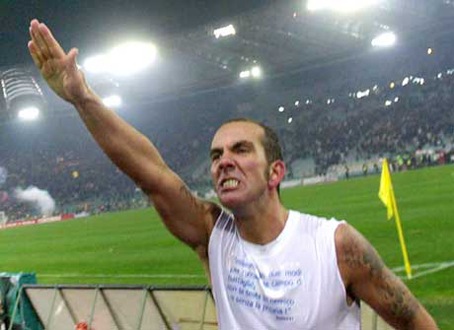 Swindon Town Football Club have taken the extraordinary step of appointing outspoken Fascist Paulo Di Canio as Swindon's new manager. How the fuck appointing an open supporter of Fascist dictator and mass-murderer Benito Mussolini is supposed to enhance the club's "Community Partnership" and "Football in the Community" strategies is beyond me. This appointment is an insult to Swindon's black and Asian communities, and to every Briton who lived and died fighting Fascism in WW2.

In his autobiography Paulo Di Canio described Benito Mussolini as "a very principled, ethical individual", Di Canio has the word "Dux" (meaning "leader", the term used by Italian Fascists to refer to Mussolini) tattooed on his right arm, and several times Di Canio has been filmed giving Nazi salutes.

Football in the Community Clive Maguire

The following individuals own a significant amount (10% or more) of the club:

The Ghosts of Auschwitz