As mass protests in Madrid raise the bar for European anti-austerity actions. We've got the Arab Spring – what about a European summer? It's a week since thousands of pro-democracy demonstrators pitched up in central Madrid (see SchNEWS 772) - and revolution fever is spreading across Europe like nits in a playground. With the Spanish sit-in still going strong – and intending to remain until at least the 29th - street demonstrations have also hit Greece, Georgia, and, er, Bristol. Protests are spreading to Italy, France, Portugal, Austria even Germany - could it be that last year's initial protests against austerity measures are maturing, one year on, into a broader demand for political reform?

From the newswires:
Crackdown begins. | Nottingham Solidarity | Spanish Revolution at London | #Spanishrevolution Has Reached Bristol | This revolution is sponsored by you! | Protests continue outside Spanish embassy | A shout from Spain | Message from Barcelona | Edinburgh Solidarity March 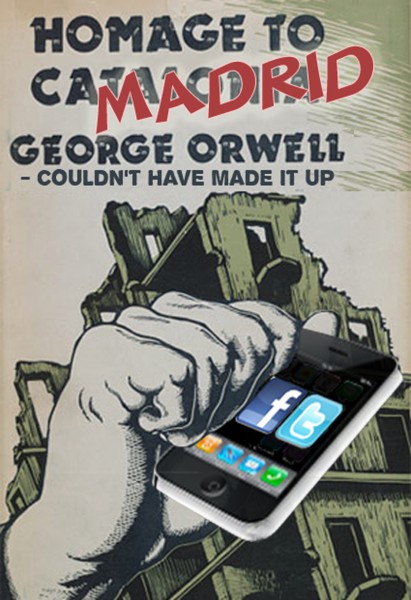 Dealing with consequences of similar protect-the-rich IMF-style austerity measures as many millions of others in Europe, the Spanish have been mobilising on the streets with mass protests and strikes for months (see SchNEWS 741). This general air of resistance has now spawned a sit-down protest in the capital city. Demands are vague and the whole thing has the feel of a forum rather than a movement with a solid blueprint for the future, but what unites them is an anger with pro-business politicians who all conspired in the banking boom, bust and bail-out.

In Madrid's central city square of Puerta del Sol, the “alternative village” set up to protest the government ahead of last Sunday's elections – which saw huge losses for Socialist Prime Minister Zapatero – continues unabated. The ‘¡Democracia Real YA!’ (Real Democracy Now!) camp now boasts ramshackle but egalitarian canteens, day-care facilities, a press office, a pharmacy and even a zone for “feminist information”. Those involved in the movement have said they'll proliferate into local groups and assemblies around the country to spread the revolutionary message. It's A Very Madrid World

In London, a camp-in opposite the Spanish embassy in Belgrave Square has seen hundreds arrive for daily rallies since 18th May. The group, calling themselves Real Democracy Now London, state their main driving force is their “outrage and weariness at the misuse of the Spanish democratic system by politicians; their lack of respect and their constant mistreatment of the general interests of the electorate”. It's a statement which sums up the widespread malcontent across the continent nicely, if you replace “Spanish” with pretty much any alternative nationality. The camp plans to remain for several more days. In Brighton, which is lacking in embassies, a solidarity protest has rocked up in a tourist-gateway lawn opposite the pier.

In Bristol, a hefty number descended on the city centre on Sunday (22nd) - but rather than only offering solidarity for their Spaniard comrades, they were hoping to spark a similar uprising in the UK. Demonstrators bore banners with memes-of-the-moment slogans such as "Real Democracy Now", and "They don't represent us".

Meanwhile tens of thousands of Greeks turned out in Syntagma Square, Athens - and in other cities - for four days running, declaring their "indignation" at the government and replicating the Spanish calls for "All politicians to go". With Greek politicians having spent most of their time recently fielding accusations of incompetence on the international stage, they're now facing a double-whammy of pressure (and should possibly learn to take a hint). The protests have so far been peaceful, which suggests, ironically, that during these most explicitly anarchic demonstrations so far, the feisty Greek anarchists themselves have temporarily cast their black masks to the back of the wardrobe and decided that petrol-bombing cars is all a bit 2010.

In Georgia, things have been a bit more rough n' repressed, as police clamped down on several hundred opposition protesters demanding the resignation of President Mikheil Saakashvili. Led by former speaker of parliament Nino Burdjanadze, the protests against Saakashvili's authoritarian leadership, repression of independent voices and the country's widespread poverty began last Saturday (21st). Five days later, to clear the way for a military procession marking Georgia's Independence Day, riot cops moved in to disperse the crowds using tear gas, rubber bullets and water cannons. A police officer and protester were killed during the brutal attack, and another 37 were injured.

Also in SchNEWS 773: Le Harve It Large | Mort In A Storm | Baton Charged | And Finally