Stop the next generation of nuclear power stations with a blockade at Hinkley Point. Join us at Hinkley on 3 October 2011. 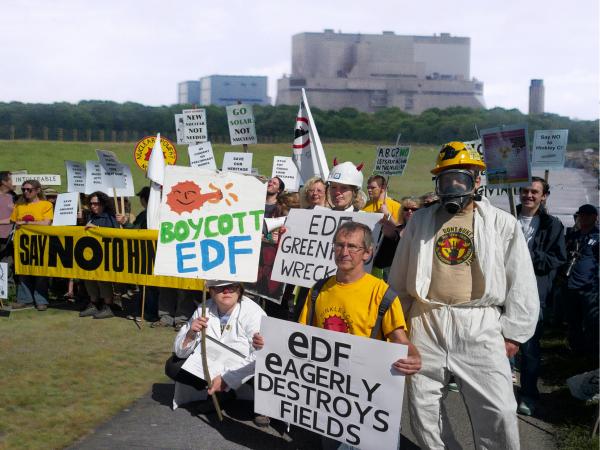 Hinkley Point, near Bridgwater in Somerset, is the first of eight proposed sites for nuclear new build to go ahead. We stopped them here before, and we can do it again. If they fail at Hinkley, it is unlikely the “nuclear renaissance” will have the momentum to continue.

The catastrophe is still unfolding at Fukushima, but the British government is continuing with its plans for building new nuclear power stations – nuclear new-build. While other countries at least put a moratorium on new nuclear, or even make plans to phase out nuclear energy completely, in Britain it’s as if Fukushima didn’t happen. Like a mantra, government and the nuclear industry keep repeating that Fukushima could not happen in Britain because there are no earthquakes of that magnitude. We heard similar excuses after Chernobyl (1986) and Three Mile Island (1979). But nuclear accidents can and do happen – even in Britain; the disaster at Windscale in 1957 released massive levels of radiation into the atmosphere. If we continue to use and expand nuclear power, there will certainly be more catastrophic accidents, not to mention all the other enormous problems associated with nuclear power production, even when it is working ‘normally’.

NUCLEAR POWER IS NOT NECESSARY, NOT SAFE, NOT SUSTAINABLE

- Nuclear power is not necessary. Several studies, from the government's Sustainable Development Commission to Greenpeace and the Centre for Alternative Technology show that Britain can meet is energy needs without nuclear, and reduce carbon emissions at the same time.

- Nuclear power is not safe. Accidents such as at Three Mile Island, Chernobyl, and Fukushima show the potentially catastrophic consequences of nuclear power. Numerous smaller accidents and incidents also happen at power stations in Britain: at Windscale, Bradwell, Sizewell, and others.

- Nuclear power is not sustainable. Nuclear power depends on uranium mining, which destroys huge landscapes and local communities living there. Uranium itself is a finite resource, and requires huge amounts of energy to be mined.

WE CAN STOP NEW NUCLEAR

The government and the nuclear industry want us to believe that nuclear new-build in Britain is a done deal. They want to discourage us from protesting – the message they want us to swallow is clear: opposition is futile, and we will be going ahead anyway! However, that couldn't be further from the truth. Yes, the government has introduced a framework which effectively will subsidise new nuclear at our expense – as electricity consumers and taxpayers. Yes, the government has effectively deprived local communities from having a say in the planning process for new nuclear and other major infrastructure projects thus dumping a crucial cornerstone of local democracy.

But nuclear new-build in Britain is already behind schedule and has faced legal and other setbacks. Public concern is mounting following the Fukushima disaster. If we can stop the building at Hinkley, we can stop the whole process. Now is the time to mobilise and take action.

New-nuclear in Britain is far from being a done deal, and we can still stop it!

NEW NUCLEAR — STOP IT AT HINKLEY!

The action: A non-violent blockade of Hinkley Point nuclear power station in Somerset

On 3 October 2011 we will – with hundreds of people – non-violently blockade the access to Hinkley Point nuclear power station for one day.

While the blockade will be the key focus, there will be plenty of roles and activities for people who do not wish to risk arrest. So everyone who is anti-nuclear can come and join us on the day to express their opposition in many different ways. We will prepare ourselves for this blockade with non-violence training, and we will not be deterred by police trying to prevent our non-violent action. The blockade will be inclusive, allowing people from all walks of life and with a wide range of experience in non-violent action – or no experience at all – to participate. We will organise a safe environment for everyone, built on trust for each other, but also on our determination to stop nuclear new-build.

In the days before the blockade, there will be local actions in Bridgwater. There will be a camp and local accommoda­tion for people over the weekend and non-violence training will be provided.