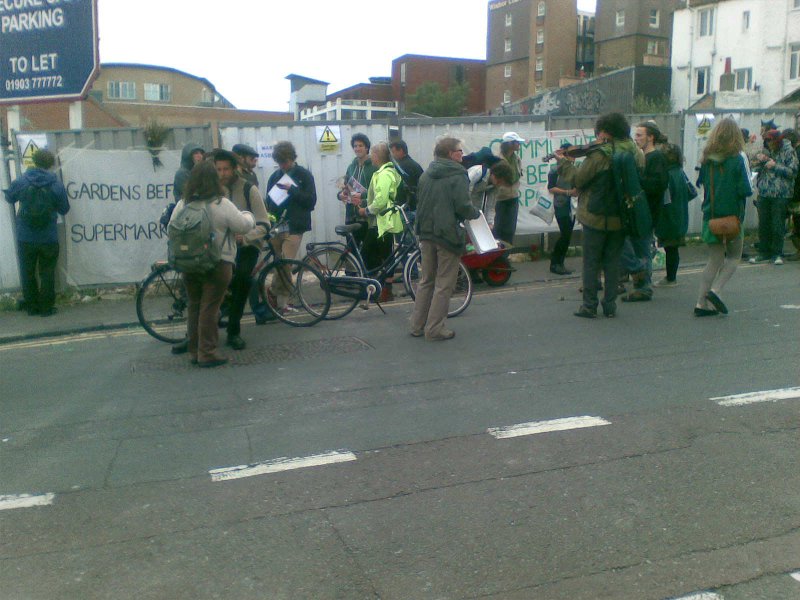 The Mound at the corner of Portland and Church Roads was the focus of a protest which began on Saturday (28/05/11) afternoon. Gardeners gathered in Pavilion Gardens, closely monitored by Sussex plod, then marched through the festival-thronged lanes with a message, less of consumerism and more of community gardens over profit-driven city centre development.

Once at the site, seedbombs were made from soil, seeds and newspaper and chucked over the metal fencing. Some hit the security vehicle within and one woman was quickly de-arrested following an over-zealous attempt by an out of his depth cop.

Littlehampton-based developers, Hargreaves, took the unoccupied site two weeks ago and killed newts (some believed to be great crested which are protected and were clearly marked as such with a notice nailed onto signage next to the water) and tadpoles as well as destroying 15 vegetable beds, four nursery planters, a wormery, local food composting area, water butts, a mini-reservoir and kids area.

Refusing to enter into any dialogue with the gardeners who implored them to keep the garden till any building began - the land is now likely to remain derelict or be turned into a car park. Hargreaves still have planning permission for offices, their more lucrative residential plans have been thrown out for 'over-development'.

Since the gardeners opened it up in January, the space had been trouble-free and one for growing and encouraging nature (pied wagtails, blackbirds, great tits had started to inhabit the now uprooted budlias) as well as local grassroots action to take back derelict and unused land from developers who plainly don't give a fuck.