UK Uncut issued a call out for an Emergency Operation in banks across the country on Saturday 28 May: "Whilst the NHS is being dismantled, the banks that caused this crisis in the first place have been left untouched. Reckless gambling, obscene bonuses and a global financial crisis are symptoms of a disease that requires a drastic intervention. The banks are due a check-up. Join UK Uncut’s Emergency Operation and transform your local high street bank into a hospital. Tell the government to leave our NHS alone; it’s the banks that are sick."

Dozens of banks were hit, many transformed into makeshift wards and operating theatres filled with bleeding patients, surgeons, doctors and nurses.

Other anti-cuts actions on 28 May: Funk the Cuts in Leeds | Eat the Rich in Nottingham | Topshop Occupation in Cardiff | Arrests in Edinburgh 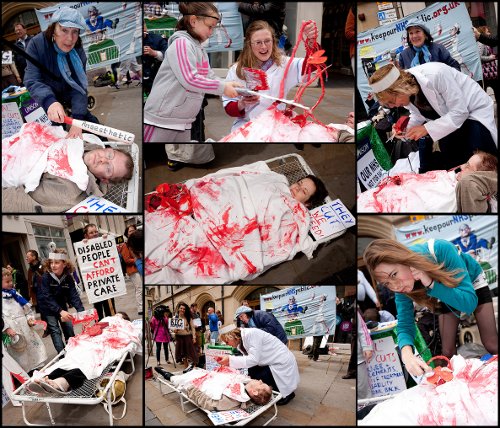 Actions took place across London. In Camden, HSBC, Nat West and Barclays banks were closed, Andrew Lansley was put on trial and HSBC was hit by a 'die-in'. An emergency operating theatre was set up inside Lloyds in Wood Green, while the Angel Islington branch of RBS was turned into a drop-in surgery for people worried about the effect of cuts on their health, and a new hospital ward was opened in the Brixton branch of Nat West.

In Bristol, Barclays and Nat West were visited by surgeons scrubbed up and ready for action in theatre, along with patients covered in bandages and fake blood.

After a parade through the Grand Arcade in Cambridge, another bunch of surgeons and suchlike shut down Nat West, before moving on to Lloyds and Barclays, where they were joined by the Love Police, finishing off with visits to the Halifax and Vodaphone.

A Big Society hospital was opened at the Cornmarket in Oxford, with several disastrous operations carried out in the streets by untrained - but cheap - volunteer surgeons. Later, nearby banks were occupied.

In Manchester, Santander was peacefully occupied and nine people arrested on the unlikely grounds of 'preventing a breach of the peace'. (Maybe this is what happens back at the station if the cops don't meet their arrest targets). Arrestees reported that they hadn't been given the option to leave the protest before being arrested and all were later released without charge.

Fitwatch reported on arrests for Breach of the Peace in Manchester and threats of arrest elsewhere, commenting on the consternation of one sergeant on discovering that the activists had legal observers and knew their rights. How inconvenient. Plainclothes FIT evidence gatherers in Cardiff, who introduced themselves by name and number, used their 'Blackberries' to take photos of the protesters for the 'intelligence log'.

In Liverpool, Nat West was occupied by hospital staff and patients for over an hour before the protest moved on to close down two Vodaphone shops, a branch of HSBC and Phones4U, encountering some violence from security guards along the way.

Actions in Edinburgh at Boots, BHS and Vodaphone led to two violent arrests when the cops suddenly decided to pounce on two women during the BHS occupation. Both were held for five hours before being charged with Breach of the Peace (which is a different offence from the England and Wales version) and, to add insult to injury, the woman who had apparently been injured when arrested by PCA4636 was charged with Resisting Arrest.

Nat West, Barclays, Topshop and Vodaphone were shut down in Leeds during 'political parties' organised by Funk the Cuts, a group which aims to harness party energy to fight the cuts.

In Nottingham, a group of anarchists took an appetising 'Eat the Rich' banner to the UK Uncut demo and handed out hundreds of leaflets: 'We think there’s only one choice now. Eat the rich. Eat away at their power by working together, building communities, and learning to look after each other. Eat away at their control over us by striking, occupying, stealing, destroying everything they ever claimed as their own.'

Four days after the protest, another activist was arrested at his home. Like the other two people who got arrested, he was charged with breach of the peace and banned from entering or attempting to enter Bhs. More info here:

Here's a video of the protest at Bhs: