At the weekend, another major blow was received by the Jewish National Fund (JNF), a UK registered charity with links to Israeli state agencies. Members of Friends of the Earth Scotland (FoES) voted unanimously to endorse an international call against the JNF. This comes after last week’s news that Prime Minister David Cameron has resigned as the JNF’s Honorary Patron.

The JNF is accused by campaigners of using an environmental image to cover up its role in taking Palestinian lands and denying access for refugees.

The FoES decision took place at the organisation’s Annual General Meeting and land rights conference. Stan Blackley, Chief Executive of Friends of the Earth Scotland, confirmed on Saturday that “members at today’s AGM voted overwhelmingly to endorse the international call to stop the JNF. At today's land rights conference the activities of the JNF were brought to the attention of our members, supporters and interested members of the public. Our organisation is pleased to join the call for the revocation for the JNF's charitable status in the UK and to help raise awareness on this little known issue." 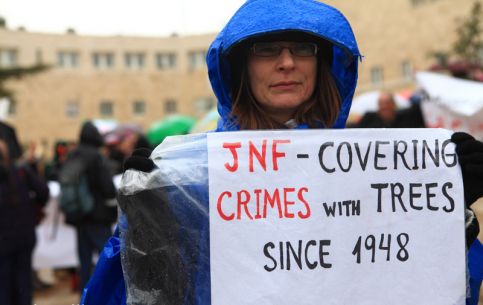 Protest in front of the Jewish National Fund’s office in Jerusalem, 1/2/11

Writer and researcher on issues of land and democracy, Andy Wightman, gave the keynote speech at the FoES conference, and also seconded the motion against the JNF. Following his speech on ‘Land rights in Scotland and Palestine’, Wightman said he was “delighted that Friends of the Earth Scotland has voted to endorse the call to stop the JNF. The JNF has played a central role in the expropriation of Palestinian land and it is high time that it was exposed for the crimes it has been complicit in committing."

FoES is the second environmental organisation to publicly distance itself from the JNF, after Friends of the Earth Palestine (‘PENGON’). Abeer Al Butmah of FoE Palestine commented that:

“Israel’s colonisation of Palestine breaches our environmental rights and results in many environmental violations. Friends of the Earth is documenting and highlighting these violations in order to resist these illegal practices. The JNF in particular is an agency used to take our land, uproot our national trees and destroy our environment and make it look more ‘European’. We welcome this decision of our colleagues in Scotland to raise awareness of what is going on in our country.”

The position now adopted by Friends of the Earth Scotland further undermines the JNF’s claim to be an environmentalist charity. In a letter to the Guardian last October Samuel Hayek, chairman of JNF UK, said the “JNF’s focus has been on developing and sustaining the environment in Israel”. Academics and campaigners have dented these assertions in a newly published e-book, ‘Greenwashing Apartheid: The Jewish National Fund's Environmental Cover Up’, which lays out the case against the JNF’s claim to be an environmental organisation and argues that it is primarily an instrument of ethnic cleansing, complicit in war crimes.

One of the contributors, Eurig Scandrett of Queen Margaret University, a Friends of the Earth Scotland member and proposer of the motion against the JNF said: “The book is a contribution to making people aware of the real nature of this organization, which plants trees and establishes nature parks and pretends to be environmental, but in fact exists for more insidious purposes – to drive the Palestinians from their homes and prevent them from returning.”

Stop the JNF spokesperson, Sofiah MacLeod, welcomed the decision of Friends of the Earth Scotland and added that “the pressure against the JNF is becoming unstoppable”. She added that “public opinion is squarely behind the Palestinians, the Arab revolutions have exposed Western complicity in propping up dictatorship in the Middle East and Israel is increasingly under pressure from an international campaign of boycott, divestment and sanctions. Over the years many organisations and individuals have spoken out about the role of the JNF in the continued colonisation of the land of Palestine and called on party leaders to support human rights against the criminality of the JNF.”

An Early Day Motion in the Westminster Parliament seeks an investigation into the activities of the JNF and claims that “there is just cause to consider revocation of the JNF's charitable status in the UK”. In 2007, the American JNF application for consultative status on a key UN committee was rejected on human rights grounds.

The Stop the JNF Campaign has workshops planned in London on 4 June 2011 and protests against JNF fundraising activities will be organised throughout the coming year.