Libya: no signs of 'rebel' successes !

BREAKING NEWS: Western Libya Portrait is not What is being Painted by Mainstream Media ...... Western media reports continue to indicate that Libyan rebels trying to oust Libyan leader Muammar Qaddafi from power, backed by daily NATO air strikes, are gaining ground in western Libya. During a six-hour drive from the Tunisian border to Tripoli, the Libyan capital, this reporter saw no signs of Libyan rebel successes in western Libya. In fact, I witnessed a spontaneous pro-Qaddafi demonstration on the main Tunisia-Tripoli highway in a town about one and a half hours west of Tripoli. The green flag of the Libyan Arab Jamahiryah not only adorn flag poles in towns from Tripoli to the Tunisian border, but a number of private residences are flying the green flag from their rooftops, on flag poles, and even from outside of top floor windows in medium size and small towns alike along the main highway. ... Visit

http://www.waynemadsenreport.com/ for more information from Wayne Madsen on Libya and other important issues ....... 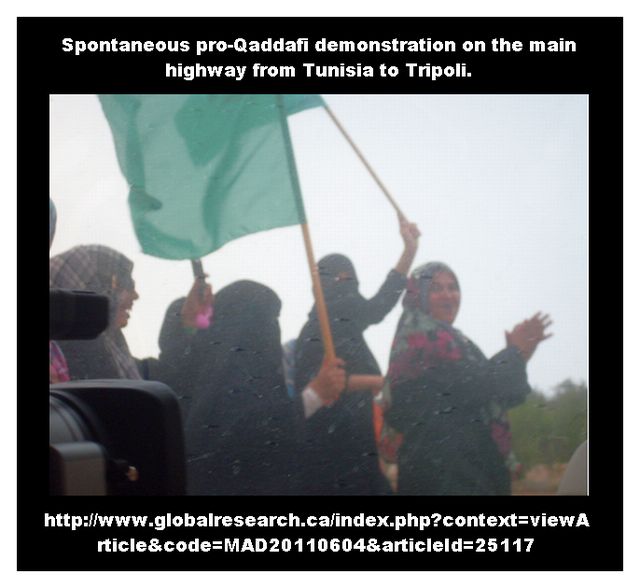 There are some telltale signs of previous fighting in the western part of the country -- bullet holes in the walls of some buildings and even some more extensive structural damage -- but there are no signs that the rebels, backed by the United States, NATO, and the European Union, have any substantial support in western Libya.

The one major sign of the Libyan civil war lies not in western Libya but across the Tunisian border where several refugee tent cities have been set up to accommodate thousands of refugees, most of them black African guest workers from sub-Sahara and Sahel nations who were set upon by rebels who said the workers were "mercenaries"brought to Libya by Qaddafi to fight on his behalf. In fact, there is a strong anti-black racialist element within the Libyan rebel movement that used the mercenary meme to justify heinous war crimes by rebel units against blacks from other African nations, as well as native Libyan blacks.

While many of the refugee camps on the Tunisian side of the Libyan frontier are sponsored by the International Committee of the Red Cross, one is funded by the United Arab Emirates, one of the nations participating in President Obama's "coalition of the willing" that is waging a war on behalf of the Libyan rebels. From our hotel on the Mediterranean coast, we expect to see and hear the attacks conducted against military and some civilian targets a further few miles inland in downtown Tripoli. ........... M O R E: