Stopped by police for talking

Today the police hit a new personal low for petty behaviour. Unfortunately I am all too use to dealing with the polic-y enforcers, it has become a somewhat regular pastime. In this incident though new depths were plumbed, I was stopped as you can see on the slip above for ‘Talking to numerous people’. It makes me wonder what sort of country we now live in where one can be stopped for talking to old friends. Let me clarify the point here, none of them had criminal pasts, none of them were engaged in criminal activity, quite the opposite they were ordinary Muslims attending a peaceful rally. There were two groups democratically voicing their discontent at American drone policy, a policy that murders innocents on a daily basis. 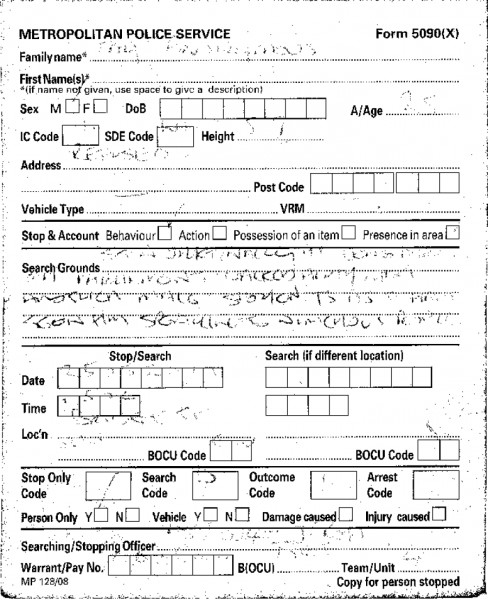 So how many is ‘numerous’ what is that golden limit that should not… nay cannot be crossed, well in my case it was about five people I spoke to there. Now I know this is more than enough to plan a conspiracy with, and to be fair to PC Plod we did all have beards. I also understand that if you have 400 officers or so waiting around they may become bored and even a little jealous of these riveting chats. Maybe they just wanted to debate the geo-political situation of Pakistan but they felt to do this they needed to instigate a stop and search under the PACE legislation.
It seems I’m getting ahead of myself, how was this criminal waste of time initiated? After I left the demo which the Cageprisoners team were invited to by Lord Nazir Ahmad. I was accosted while getting my post rally coffee, it also seems worth mentioning that I was with the board member and another intern at the time. The board member is a lawyer, and looks it too, while the other intern is a non-Muslim American. So as we (the odd three) entered and started ordering our lattes like good Londoners; three officers followed us in and asked me to accompany them outside.
Upon exiting I was asked for my name, which I duly refused to give, I was informed that I had been observed talking to numerous people. Somewhat confused I inquired as to if this was a crime, thankfully I was informed it was not. Now if you’ve been paying regular attention to the Cageprisoner’s website you will have read an article on know your rights

http://www.cageprisoners.com/our-work/opinion-editorial/item/1076-know-your-rights-what-to-do-when-mi5-comes-knocking-for-you . Alhamdulillah I did read this section thus I asked the officer what section I was being held under, to which he replied that I was not being held under any section, this was just a chat. At this point I decided I’d had enough of talking to the gentleman and my beverage was in all likelihood ready so I told the Old Bill I’d be off now… They seemed to have a different plan and proceeded to tell me my headphones were suspicious and that I was now being held under PACE for a stop and search...oh the JOY. Never fear though because like a knight in a shining suit the afore mentioned board member piped up telling Her majesty’s constables that he was my lawyer, I thought we had solicitors here but what do I know. Clearly somewhat put aback by the fact that we both knew the law better than they did, the law enforcement bully boys proceeded to quickly carry out the search of my person in front of all the onlookers, well it wouldn’t be a proper day trip if the tourists didn’t see at least one minority abused. After a quick bout of form filling and the officer incorrectly guessing my age (No I didn’t lie to them) we were all free to go on our merry way. The form, as you can see above, stated:

“Seen on looking at demonstration at Parliament. Walked away with another male. Spoken to as we had seen him speaking to numerous people.”

The point for me here is not that I had my time wasted or that I was stopped blatantly because of my religion nor that maybe they knew who I was from the start and just wanted to harass me. No, while all this was going on a war criminal drove right by and into the houses of parliament and no one cared.

You've only got yourself to blame then. A well-shaved society is a well-run society. Look at the Chinese. No, hang on...

Not to make light of such ridiculous oppression but this is definitely a contender for schnews crap arrest of the week...

Well he wasnt actually arrested and this isnt so very unusual. However the reasons given for the stop and search are so ridiculous that he should consider sueing the cops.