Activists in Calais are seriously thin on the ground at the moment; if you can come even for a few days to give those who have been there for months a break, then please don't hesitate! 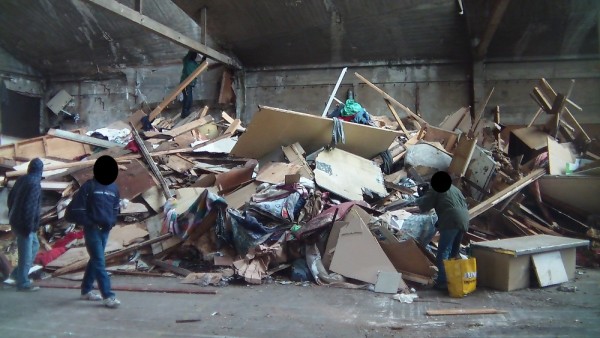 Africa House being demolished over the heads of its occupants

The scale of this repression warrants more direct solidarity by those in a position to go over and offer support: we are currently down to just a few people over there.

calaisolidarity@gmail.com if you are thinking of going over.

- Eviction alert for the latest Africa House – an industrial complex which the authorities have been slowly demolishing over the heads of its occupants. Police have reportedly just completed special training for the event.

- The police upping the ante against No Borders: 5 activists are served pretty serious charges:

- The release of video evidence of police brutality to the French media, which received national coverage

- Yet another death at the border: an Iranian man was killed last month when fell from a speeding lorry whilst attempting to shut its doors.

Most of the time we struggle to keep up with the sheer number of raids and arrests, especially when there are few of us there, but our arrest log for May of last year reveals a more comprehensive snapshot of the daily repression in Calais, which we add to this callout to give you a flavour of the intensity of the harassment. The levels of repression remain the same (see our blog). although the differences today are that the PAF (border police) now play a more active role than they used to, and activists are being regularly targeted as well as migrants.

* A month in Calais:

Friday 7 May: morning and evening raids on Pashtun jungle, both unsuccessful; night raid on Hazara jungle, no one taken; raid on Palestine house 12.30 pm, 5 or 6 taken

Monday 10 May: 3am, 4 people taken outside Africa House;

Wednesday 12 May: Palestine house raided 3am, 7 arrests, everything destroyed

Thursday 13 May: Africa House raid foiled by activists – no arrests this morning! 7 people taken from house next to Palestine House

Friday 14 May: Africa House morning raid, 17 arrests; police came again at 12 noon, 9 more arrests. Palestine House: police came at 2am and 5am, 1 arrest. Police came again at 9pm with 10 arrests and use of teargas. 8 of the arrestees were taken 6km out of town and made to walk back. After they had walked 1km they were picked up and driven back to start again.

Saturday 16 May: Africa House raided 8.45pm, one person beaten up.

17 May: Pashtun Jungle 4 people arrested in the night.

18 May: Africa House around 8pm, all had documents. Around 8pm 10 Afghans and 2 Palestinians arrested in the street.

Saturday 22 May: 5 people from Africa House, 3 people in park nearby and 2 from the house

Tuesday 25 May: Palestinian House, 3 or 4 arrested in early morning raid; 2 or 3 Somalis arrested near station

Wednesday 26 May: 6pm, 6 or 7 people arrested on train tracks near Africa House, SNCF security with dog joined in with police; Palestine House 9pm 5 arrests, bedding and water supply sprayed with chemicals, possibly disinfectant; 9-10am one African arrested at the station

Friday 28 May: 7 Africans arrested at train tracks 00.20 am; 4 arrested at Pashtun Jungle roughly 9am; 7 arrested at Hazara Jungle in 9am raid, tents and food destroyed; 1 arrest at Palestine House 7 pm

Sunday 30 May: 1 arrest at Palestine House

Monday 31 May: 7 arrests at Africa House; 20 at Pashtun Jungle, police came twice; 4 Hazaras arrested on way to food distro; 6 to 8 arrests at Palestine House in 2 raids, people still held in Coquelles at 10pm; 4 others arrested, probably in the park.