Today, 7 June, the “Making Work Pay” conference was cancelled due to pressure from campaigners. Campaign coalition Boycott Workfare had called the action to launch the Welfare Uncut campaign that will take action against those organisations involved in rolling out the Work Programme. 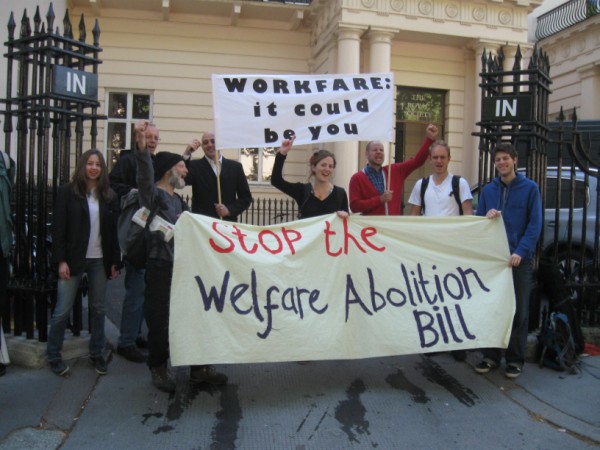 Today, 7 June, the “Making Work Pay” conference was cancelled due to pressure from campaigners. Campaign coalition Boycott Workfare had called the action to launch the Welfare Uncut campaign that will take action against those organisations involved in rolling out the Work Programme.

Boycott Workfare is a coalition of unemployed people, anti-cuts campaigners, charity workers, trade unionists and allies. It is an ongoing campaign to challenge the government’s Work Programme, or ‘workfare’, and the companies profiting from the free labour it provides.

Despite DWP research concluding that “there is little evidence that workfare increases the likelihood of finding work”, the Work Programme will compel Jobseekers to work without pay for up to 30 hours a week. Existing placements include Poundland, hospitals, public parks and charity shops. Campaigners fear these compulsory placements are already replacing paid jobs.

Joanna Long, spokeswoman for Boycott Workfare welcomed the cancellation as a first campaign achievement:
“Today’s conference would have brought together organisations which may be involved in rolling out the Work Programme. That because of our actions it didn’t take place is a great way to launch the campaign and a success. All organisations involved in the Work Programme have been put on notice: They might get free labour but it will cost their reputation.”


Notes to editors
1. The demonstration was called by the Boycott Workfare coalition, which includes: Arts Against Cuts, Disabled People Against Cuts, London Coalition Against Poverty, Single Mother’s Self-Defence and others. The coalition calls on organisations to refuse to accept non-voluntary unpaid labour via the Work Programme. The action today launched the “Welfare Uncut” campaign which aims to take direct action against those organisations which do accept Work Programme placements. See:

2. The conference was organised by Inside Government and was to bring together delegates who may be involved in implementing the Work Programme: “central government, local authorities, private sector, community and voluntary groups... welfare to work policy leads, work programme directors”:

3. The Welfare Reform Bill is now awaiting the Report Stage in the House of Commons. It is expected this week or next:

4. The Work Programme gives job centre advisers discretion to mandate people claiming Job Seekers Allowance (JSA) to undertake up to 30 hours' unpaid work per week for a period of up to 4 weeks (see SSAC report below): equivalent to £2.25 per hour (based on JSA of £67.50 a week) or £1.78 per hour for someone under 25 years old (who receives £53.45 JSA a week). The placements are administered nationally by 16 private sector and two voluntary sector organisations, who subcontract to the public, private and voluntary sector organisations:

5. Workfare already exists under the Flexible New Deal, where companies like Poundland have been able to benefit from unpaid labour, and many charity shop staff are no longer volunteers but mandated to be there in order to claim Job Seekers Allowance:

6. The Social Security Advisory Committee's report on 1 April was scathing about the Work Programme -

http://ssac.independent.gov.uk/pdf/MWA_report.pdf
• “Published evidence is at best ambivalent about the chances of ‘workfare’ type activity improving outcomes for people who are out of work.”
• “We are concerned that mandating an individual to this scheme could also have the opposite effect to the one intended.”
• “This seems to us to signal that being mandated to mandatory work activity is regarded as a punishment...”