The BNP published an article under the headline "All Rapes in Oslo Committed by Immigrants", claiming that a Norwegian Police report "revealed that all perpetrators of rape... were identified as being non-Western by their victims", and that the report has "shown that Third World immigrants, most if not all of them Muslims, are responsible for the vast majority of sexual assaults and rapes in the country". In fact the report says exactly the opposite of what the BNP pretends it says --- 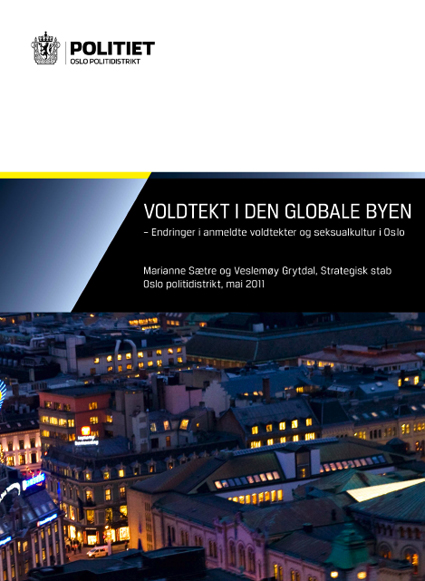 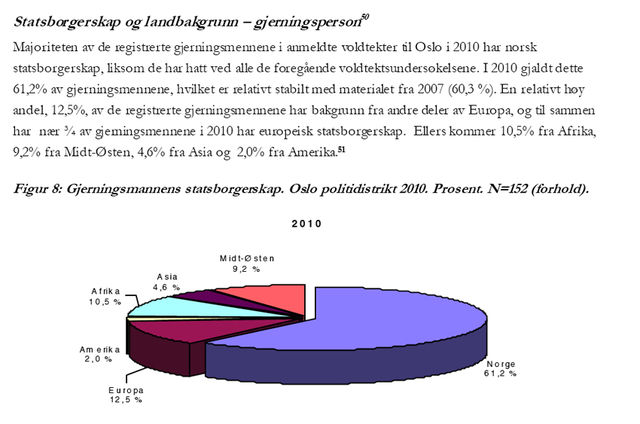 Stats from the Norwegian Police Report 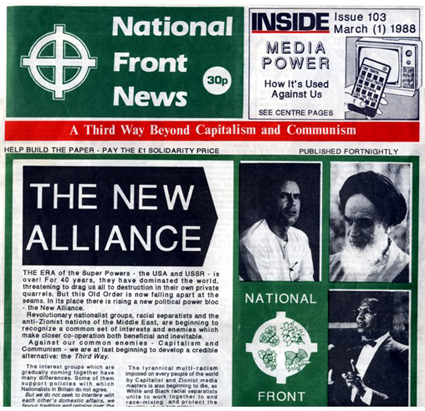 On 1st June 2011, the British National Party published an article on the BNP website under the headline "All Rapes in Oslo Committed by Immigrants" [1]. The BNP state that a Norwegian Police report "ironically titled Rape In The Global City, revealed that all perpetrators of rape or attempted rape in Oslo over the last five years were identified as being non-Western by their victims", and that the report "is the latest in a series of similar investigations that have shown that Third World immigrants, most if not all of them Muslims, are responsible for the vast majority of sexual assaults and rapes in the country" (see image 1). The BNP article links to a You Tube video of a Norwegian TV news clip that appears to support this claim [2].

Googling the search term "Rape+in+The+Global+City" produces a list of links to blog postings that repeat the BNP allegation, most of which are word-for-word identical to the report on the BNP website, and most of which appear on extreme right-wing, conservative and/or Nazi blogs like the BNP front sites Northeastpatriot and Tamesidecitizen, and the KKK website Stormfront. One genuinely Norwegian blog that discusses the report makes no mention of Muslims or immigration, stating (in English) that "Norwegian police released a new statistical report on rape cases in the capital, and could tie many of them to..." not immigration, but to (quote) "consumption of alcohol and a new, more liberal sexual culture that has confused the limits of what’s allowed and what’s not", and revealing that "33 percent of all rape charges filed last year were party-related" [3].

Images in the TV news clip show the Norwegian title of the police report is "Voldtekt I Den Globale Byen", and Googling that title leads to the Norwegian police website [4] and to a PDF of the original police report [5] (see image 2). In the section "Citizenship and Country of Origin (of the) Offender", page 52 of the report states that "the majority of the registered perpetrators in reported rapes in Oslo in 2010 have Norwegian citizenship, as they have had in all the previous rape investigations. In 2010 this applied to 61.2% of the perpetrators, which is relatively stable (consistent) with material from 2007 (60.3%). A relatively high proportion, 12.5% of the registered perpetrators, have backgrounds in other parts of Europe, and together have close to 3/4 of the perpetrators in 2010, European citizenship. Otherwise 10.5% from Africa, 9.2% from the Middle East, 4.6% from Asia and 2.0% from America" (see image 3).

Where the BNP attempt to blame these rapes specifically on Muslims, page 54 of the police report states that "generalizations that have given the impression that the rapists are only foreigners - and mainly Muslims - proves inadequate and erroneous" [7] - in other words the report actually says the exact opposite of what the BNP pretends it says! Factoring-in the possibility that at least some immigrants and/or Muslims may be counted as people who now have Norwegian citizenship, and that Norwegian citizenship may potentially obscure some peoples' ethnic roots, page 86 of the report clarifies that "in all, three quarters of the 152 known perpetrators which were reported in 2010 (had) European citizenship, mainly Norwegian" and that "half have ethnic roots in Europe and again mainly Norway" [8].

It's obvious that the BNP lying about such serious crimes is a grotesque insult to all immigrants and to all Muslims, but it's perhaps less obvious, but equally important, to state that in lying about this police report, the BNP also render a gross insult and disservice to the predominantly female victims of these crimes, whose suffering the BNP exploit in their attempt to promote their repulsive agenda. While everyone has a right to free speech, it is generally accepted this does not include the right to libel and slander, and does not include the right to endanger people by (so-to-speak) "shouting FIRE in a crowded theatre". The BNP do both, often, and unfortunately the law only proscribes libelous statements made against individuals, allowing Fascists to libel entire communities with virtual impunity, and effectively forcing Anti-Fascists to take independent action to defend communities in situations where State intervention has failed.

One paradox of how right-wing extremists harp on about the alleged "failure of the left" in modern politics, is that the massive success liberal-humanist and feminist ideas have had in influencing popular culture, has forced these same right-wingers to dishonestly try to usurp liberal values, by pretending that (for instance) extreme right-wingers now defend women's rights. The strategy of right-wing recuperation of feminist issues is attempted by the BNP and EDL in the UK, Geert Wilders in Holland and even elements of the BJP (Hindu Fascist) women's groups in the slums of Mumbai. Of course issues of sexual crime, forced marriage and other problems encouraged by patriarchal religious beliefs are very serious problems, but the irony is that white nationalists bitterly opposed the feminist groups who were fighting against (for instance) Muslim fundamentalism, at the time when Fascists like Nick Griffin were supporting the same fundamentalisms he now claims to oppose. When (current) BNP chairman Nick Griffin was (previously) leader of the NF in 1988, under Nick Griffin's instruction the NF supported the Islamo-Fascist regime of Ayatollah Khomeini, believing that "revolutionary nationalist groups, racial separatists and the anti-Zionist nations of the Middle East, are beginning to recognize a common set of interests and enemies which make closer co-operation both beneficial and inevitable" [9], believing that the NF would unite with Fascists like Khomeini and Louis Farrakhan to form a "credible alternative" that the NF referred to as "The Third Way" (see image 4).