"... We, the undersigned, are calling upon the UK Border Agency and the British Government to give Betty Tibikawa leave to remain in the UK, with refugee status, and to stop deporting people persecuted for their sexual orientation... " 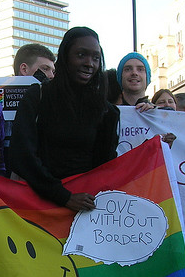 
FOR THE ATTENTION OF:

June 8th, 2011
Betty Tibikawa is a 22-year-old Ugandan lesbian who applied for asylum in the United Kingdom. Her application was turned down and for some time now she has been waiting to be deported in Yarl’s Wood detention centre (Bedford), and is struggling to stay alive.
The British Government has decided to send her back to Uganda, to a country where she was brutally attacked and injured, and where David Kato, a Ugandan gay activist, was murdered just few months ago. And this is in spite of the UK Deputy Prime Minister, Mr. Nick Clegg, saying that the United Kingdom would not deport people persecuted on account of their sexuality.
In Uganda Betty was branded with a hot iron because of her sexuality. She was 'outed' in a Ugandan tabloid, called the Red Pepper, last February, saying that she was wanted by the authorities for being a lesbian. This put her life at increased risk, and after the newspaper publicly identified her as a lesbian, Betty’s family disowned her.
Homosexuality is illegal in Uganda. An anti-homosexuality bill calling for more punitive measures against gay people was due to be voted on by the Ugandan Parliament in recent weeks, but it was not discussed. There is a chance it will be brought before parliament again later in the year. Human Rights organisations have consistently documented abuses against gay men and lesbians in Uganda, and say that it's one of the most dangerous countries in the world for LGBT people.
The UK Border Agency decision - in the case of Betty Tibikawa, and in the cases of other gay men and lesbians seeking asylum from persecution in Uganda - flies in the face of the values espoused in a recent speech by the British Deputy Prime Minister.
Despite all this, another Ugandan lesbian, B.N., was due to be removed from the UK in January, but her removal was suspended following intervention by her lawyers. Her case is due to be heard in the Court of Appeal in July.
A 34-year-old gay man from Uganda was due to be removed from the UK on May 17th. The UK Border Agency has not confirmed whether or not the removal went ahead.
In the face of these startling acts of doublespeak by the UK authorities, it is time to start holding the UK Government to account for the discrepancies between the values they like to claim publicly, and those upon which they truly act.
We, the undersigned, are calling upon the UK Border Agency and the British Government to give Betty Tibikawa leave to remain in the UK, with refugee status, and to stop deporting people persecuted for their sexual orientation.
Betty Tibikawa says she is unable to sleep and has been having terrible nightmares since she was abducted and tortured by three men in Uganda.

You can read Betty’s story at