Garment workers in the Sri Lankan 'Free Trade Zone' of Katunayake have defied the government and their own union bosses over the implementation of a new private pension scheme, forcing the ruling United People's Freedom Alliance back to the drawing board. However, Katunayake is under virtual military occupation following the rebellion, which saw police murder protesting worker Roshen Chanaka Ratnasekera. 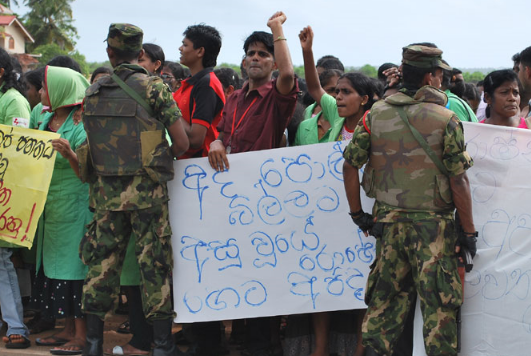 Katunayake is under military lockdown, but workers are still defiant 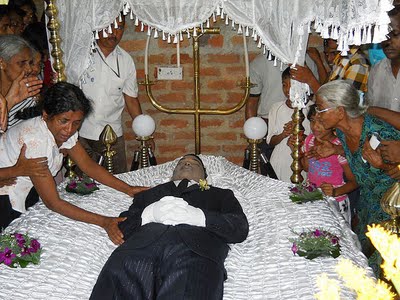 The Private Sector Pension Bill was progressing through parliament when the revolt broke out. Under the original proposals, workers would effectively lose 2% of their income, which would then supposedly be paid into a pension scheme. However, they would receive less when they eventually retire - or, like many of the young and female workforce - return to their home villages and get married. The bill was being dictated by the International Monetary Fund (IMF), as part of a reform package designed to benefit the global financial elite.

Under pressure from the government of Mahinda Rajapaksa and the IMF, the unions called off protests scheduled for May 24th. This produced a furious reaction from the garment workers, who launched a wildcat strike in their tens of thousands. Police were called in, to mount vicious attacks on the protesters. However, this led to even more workers coming out, with striker numbers estimated at forty thousand. At a protest outside a factory on 1st June, cops fired shots into the crowds. Ratnasekera was amongst the many wounded, when bullets hit his legs. Despite massive bleeding, police refused Ratnasekera medical treatment at their station. Two hours later, he was dead.

Panicked, the government called in the military to suppress the protests, and proposed further consultations with the trade unions on the pensions issue. However, further conflict is inevitable. The IMF will not back down over their demands, which means the trade union bureaucrats will, on behalf of their membership. When this happens, the rebellion will surely resume.

The Sri Lankan garment rebellion is of a piece with the uprisings in Egypt, Tunisia, and the 'Arab spring' in general. Throughout the world, workers are rapidly reaching breaking point - the 'straw that broke the camel's back'. Oppressed by the international financiers and their own ruling classes, and abandoned by the trade union leaders who owe their comfort to the exploitation of their membership, workers are beginning to organise themselves democratically in defence of what little they have. Battle is joined, and a global class war suddenly has two sides in combat.