Campaigning for Justice 4 Kingsley Burrell, and in unity with Justice 4 Smiley Culture.
2nd July: March for Justice In Birmingham. We can make this as big as the march in London. It will be a peaceful March 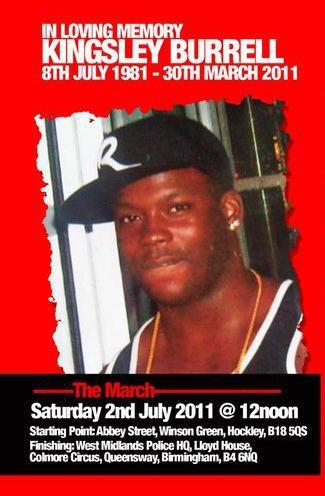 Kingsley died in extremely suspicious circumstances in Birmingham. It is reported that Kingsley called the police after he tried to talk to a group of young people who were intimidating him and his 5 year old son. He was arrested and detained under the mental Health Act and days later he was in intensive care and subsequently died. We need you to support the family's campaign for justice. Remember No Justice No Peace. One Love and One Aim = Unity.

IMPORTANT DATES FOR YOUR DIARY:

2nd JULY 2011: MARCH FOR JUSTICE, IN BIRMINGHAM
Timings & march route will follow. We can make this as big as the march in London. IT WILL BE A PEACEFUL MARCH

Update: Maxie Hayles, head of Birmingham’s Racial Attacks Monitoring Unit, said: “The plan is to assemble in Abbey Road from 12 noon, to march for 1pm, then walk on past the Seacole mental health unit in Winson Green, where Kingsley was taken, then on to Bolton Road, Soho Road and into the city centre to Lloyd House, the headquarters of West Midlands police. There we will rally, like we did outside New Scotland Yard.” (From the Voice Online)


Speakers will include members of the Friends of Mikey Powell Campaign for Justice, set up in memory of Mikey Powell who died in police custody in Birmingham more than six years ago. There will also be family representing Birmingham-based Julian Webster, who died under controversial circumstances outside the Pitcher and Piano nightclub and bar in Manchester in 2009.