Yesterday morning BBC Radio Five Live demonstrated, once again, the utter futility of interviewing former undercover police officer Mark Kennedy. Mr Kennedy is a man who has carved out a career as a professional liar. Pouring his heart out to Victoria Derbyshire, he apparently deeply regrets the endless lies he had to tell in his former role. However, he seems to show no sign of giving untruths a rest.

When asked whether he ever acted as an agent provocateur, Kennedy claimed he had “never encouraged anyone to do anything they weren’t already going to do”, and that he only ever came in at a very late stage to planned direct actions.

However, in the case of the 114 people arrested for conspiring to commit aggravated trespass at Ratcliffe-on-Soar power station in April 2009, we know this to be far from the truth. 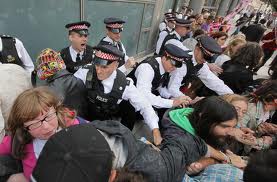 The police get rough with protestors. Again!

We’ve long known that Kennedy was one of the first to learn of the proposed plan to shut down the power station. He was the driver for the first reconnaissance mission to the site in January 2009, and then continued helping plan and finance the action until it brought more than 100 climate campaigners together in Nottingham on the day of the arrests.

Unlike Kennedy, most of those arrested had only learnt of the plan that day, and many had still not made up their minds at the time of their arrests.

Leaked documents have since confirmed this fact, revealing that police applied for clearance for Kennedy to gather intelligence on the Ratcliffe plan as early as November 2008, before Ratcliffe was even selected as the target power station. How is being involved from a plan’s inception ‘coming in at a very late stage’? How is providing the expensive vehicle to transport equipment to the power station ‘not encouraging others’?

However, the key point that stemmed from this morning’s interview is that Kennedy’s words actually don’t matter. He may have been the symbol at the centre of the scandal, but he is just a pawn in a much bigger affair that relates to our civil liberties and right to privacy from the state.

Kennedy acknowledged this point repeatedly in Five Live’s studio when he failed to provide answers to key questions. He had no knowledge about how information he gathered was handled by the police and Crown Prosecution Service in the many other protest actions he spied upon, he had nothing to say on what the overarching motivation behind his deployment was, and no knowledge of what selection criteria is in place for which political groups are subject to infiltration.

He can’t even say whether or not his bosses knew about his alleged sexual misconduct.

However, unlike Kennedy, those with the answers to these questions are not flocking to radio and television studios. My guess is that they won’t be anytime soon. For this reason our campaign continues…

Bradley Day is the co-founder of No Police Spies, a group fighting for an end to police infiltration of protest groups

YES, Kennedy is still a lying piece of shit, and YES, he is lying about 'coming in at a late stage'..

BUT the essence of his point is true, at least in the 114 case, that he didn't encourage "anyone to do anything they weren’t already going to do”... there were plenty of people determined to do that action who would have made it happen anyway, and we should be proud of that, not try and hide it in a pile of bollocks about 'Agent Provocateurs'.

All this talk of 'Agent Provocateurs'...
...implies that we are easily manipulated when in fact we consider our actions carefully
...implies that the 114 action idea was extreme or foolish, at a time when we should be encouraging more people to do these kinds of actions.

Will NPS *PLEASE* stop going on about Agent Provocateurs? It's really misleading and undermines the symbolic power of our actions.

(Unless you know of other cases where Kennedy *did* act as an AP, in which case talk about those, not the 114 case)..