On 14 June, guests and judges arriving for the BP Portrait Award ceremony came face to face with portraits of people affected by BP's massive oil spill in the Gulf of Mexico. The blowout of the Deepwater Horizon caused the deaths of 11 oil workers and untold, ongoing damage to the people and the environment of the Gulf Coast. 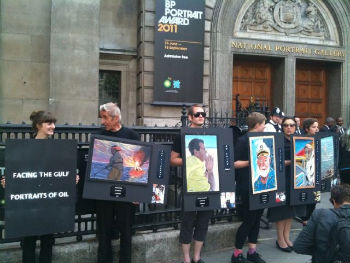 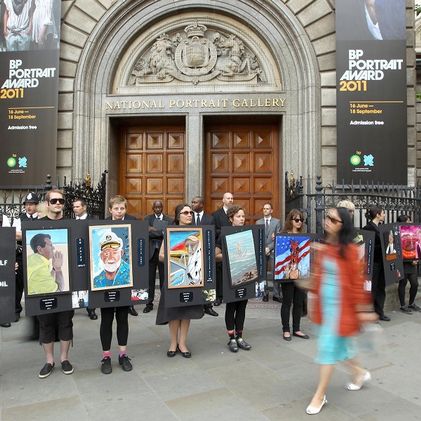 Lining the entrance to the National Portrait Gallery, London Rising Tiders were joined by folk from Climate Rush and Platform to mount our Living Exhibition of portraits from the Facing the Gulf project -

http://www.facingthegulfportraitsofoil.blogspot.com/. As they entered the greenwash event, BP's guests all had to see the portraits and hear the stories of the ordinary Gulf Coast residents who painted them, and whose lives have been damaged by the devastating oil spill. The portraits were created in workshops held on the Gulf Coast and led by UK artist Nick Viney. All of the paintings were submitted to the Portrait Award - unsurprisingly, they weren't included on the short-list. Tonight, we brought them 'home' to the award ceremony, where they were able to tell a powerful and important story. See Art Not Oil for a gallery of the project portraits -

American folk/eco-duo Sassafras performed 'Art Not Oil', which was written for the occasion, and other songs urging the NPG to free itself from BP's oily grasp. We handed out a thousand flyers which were well received by passersby and many guests, including one of the artists who had been short-listed for the prize, who said that he felt tainted by BP's sponsorship.

We invited Sandy Nairne, the NPG director, to take some time out from the evening's festivities to attend the Living Exhibition outside - also unsurpringly, he never showed. Clearly, he's not ready to face the fact that under his leadership the NPG is providing cover for BP's appalling safety record and continuing assault on the environment and people all over the world.

Next up: A new play, We Will Make You Whole, which dramatizes the plight of Gulf Coast residents and which will feature the Facing the Gulf project portraits as part of the production - on at Acquire Arts, Battersea from August 6th, 2011. We're preparing Sandy's invitation now - will he show up next time?

Check out the great press coverage of the action, including:
the Guardian -