NATO Incorporates Libyan Experience For Global War Template ........ As the West’s war against Libya has entered its fourth month and the North Atlantic Treaty Organization has flown more than 11,000 missions, including 4,300 strike sorties, over the small nation, the world’s only military bloc is already integrating lessons learned from the conflict into its international model of military intervention based on earlier wars in the Balkans, Afghanistan and Iraq. What NATO refers to as Operation Unified Protector has provided the Alliance the framework in which to continue recruiting Partnership for Peace adjuncts like Sweden and Malta, Istanbul Cooperation Initiative affiliates Kuwait and the United Arab Emirates and Mediterranean Dialogue partnership members Jordan and Morocco into the bloc’s worldwide warfighting network. ......... Italo-Turkish War of 1911-1912 ........... 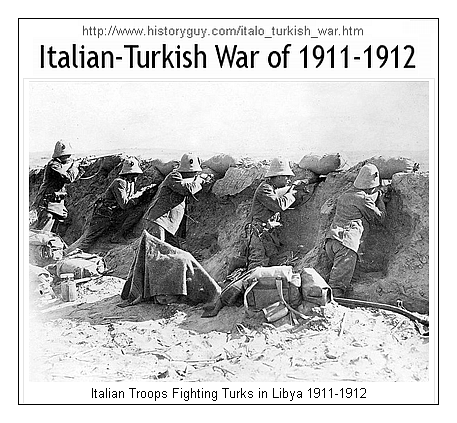 Sweden, Jordan and the United Arab Emirates also have military personnel assigned to NATO’s International Security Assistance Force in the nearly ten-year-long war in Afghanistan. In the first case, troops from the Scandinavian nation has been engaged in their first combat role, killing and being killed, in two centuries in Afghanistan and has provided eight warplanes for the attack on Libya, with marine forces to soon follow.

The military conflicts waged and other interventions conducted by the United States and its NATO allies over the past twelve years – in and against Yugoslavia, Afghanistan, Macedonia, Iraq, Somalia, Sudan, Pakistan and Libya – have contributed to the American military budget more than doubling in the past decade and U.S. arms exports almost quintupling in the same period.

The Pentagon and NATO are currently concluding the Sea Breeze 2011 naval exercise in the Black Sea off the coast of Ukraine, near the headquarters of the Russian Black Sea Fleet based in Sebastopol. Participants include the U.S., Britain, Azerbaijan, Algeria, Belgium, Denmark, Georgia, Germany, Macedonia, Moldova, Sweden, Turkey and host nation Ukraine. All but Algeria and Moldova are Troop Contributing Nations for NATO's Afghan war. The once-annual maneuvers resumed again last year after the Ukrainian parliament banned them in 2009. This year's exercise was arranged on the initiative of chairman of the U.S. Joint Chiefs of Staff Admiral Michael Mullen. Last year's Sea Breeze drills, the largest in the Black Sea, included 20 naval vessels, 13 aircraft and more than 1,600 military personnel from the U.S., Azerbaijan, Austria, Belgium, Denmark, Georgia, Germany, Greece, Moldova, Sweden, Turkey and Ukraine.

This year the guided missile cruiser USS Monterey joined the exercise. The warship is the first deployed to the Mediterranean, and now the Black, Sea for the Pentagon's Phased Adaptive Approach interceptor missile program, one which in upcoming years will include at least 40 Standard Missile-3 interceptors in Poland and Romania and on Aegis class destroyers and cruisers in the Mediterranean, Black and Baltic Seas. Upgraded versions of the missile, the Block IB, Block IIA and Block IIB, are seen by Russian political analysts and military commanders as threats to Russia's long-range missiles and as such to the nation's strategic potential. ......... M O R E: ... from Rick Rozoff .............

“War” on Iraq in perspective: The developing US imperialism and demonocracy .........