From death row in Pennsylvania: a new book in the UK, Jailhouse Lawyers by Mumia Abu-Jamal, will be launched in London, Manchester and Liverpool Jun 30th-July 2nd. Award-winning journalist Mumia Abu-Jamal introduces us to fellow prisoners who litigate against their jailers, risking punishment or even death, to win justice for themselves and other prisoners. 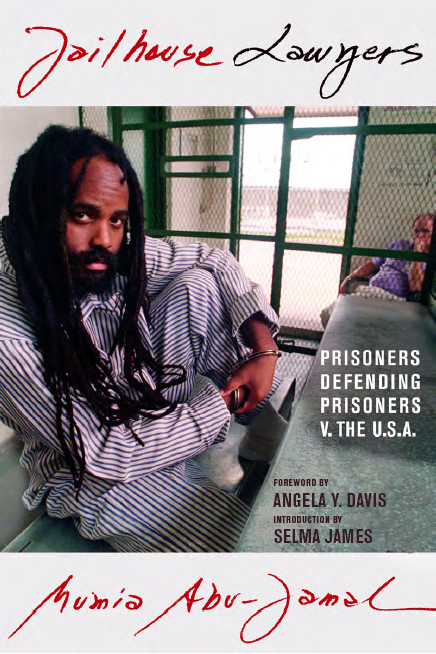 “This is the story,” he writes, “of law learned not in the ivory towers of multi-billion-dollar endowed universities [but] in the hidden, dank dungeons of America – the Prisonhouse of Nations.”

Selma James’s Introduction presents the parallel universe of UK jailhouse lawyers who, like their US counterparts, are leading a justice movement inside prisons.

UK prisoners, denied the vote, are campaigning for this fundamental right. A legal challenge brought by a jailhouse lawyer supported by a dedicated legal team won a European Court ruling in 2004 that a blanket ban on votes for prisoners violates their human rights. Yet the government, in opposing votes for prisoners, acts as if those of us who are prisoners are less human, and deny that prisons and what goes on in them also frame the kind of society we all inhabit.

The UK publication of Jailhouse Lawyers is an opportunity for prisoners’ campaign for the vote and other efforts for fundamental reforms to be more widely known and supported.

They learn the law, the procedures, the jargon, and mount an often formidable legal defence. In the process they carve out a life for themselves. -- Selma James, from the Introduction
..................

All events wheelchair accessible, News from Nowhere event has accessible toilets in arts centre nearby.

Order on line at

http://allwomencount.net/Publications/Forsalepage.htm or send your order to: