As expected: Following the opportunistic yelps of a jumped-up tory media-whore (see SchNEWS 764), against the background of a right-wing ideological crusade, the criminalisation of squatting is now on parliament’s agenda. This week the government announced a brief consultation period was under-way on the issue of occupation without authorisation. The sights of the Tory legislative blunderbuss are slowly being zeroed in, battle lines are being drawn and arguments rehearsed. As every day goes by, the corporate press prejudice people further against one of the few remaining laws that empowers the many against the few.

The squatting community and it’s supporters have to fight their corner without the benefit of funds, media presence or political influence - they must work from the ground up and rely on the ability of people (and in this case, worryingly, politicians) to judge fairly between logical arguments. Some squatters have already risen to the challenge - Squattastic is an irregular though frequent series of open meetings, held in a chain of different squatted properties, mainly in the London area to discuss ways in which this crack down can be combated.

In a more mainstream stylee - The SQUASH Campaign is a dedicated group of activists and researchers who have already given a briefing to Parliament attacking the proposed change to the law - this was presented on May the 18th and was attended and supported by several well-known groups involved with homelessness issues, including Crisis and Shelter. 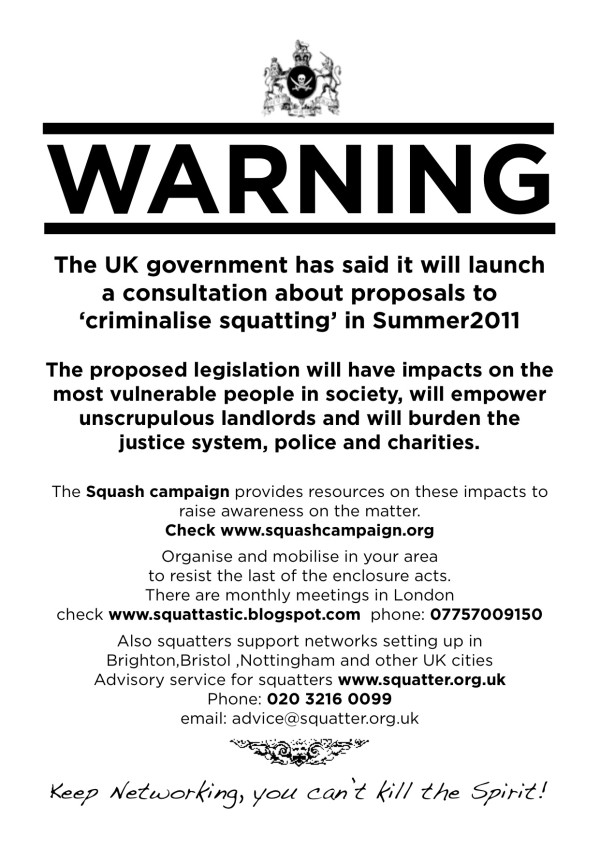 We are in the midst of a housing crisis in which rents are increasing, people are struggling to get mortgages and housing benefit is being slashed. This is gonna have a big knock-on effect on homelessness. Meanwhile, 870,000 homes lie empty and there’s enough empty commercial property to create 420,000 new homes. Far from being a social menace - squatting is a positive short-term solution to homelessness, requiring initiative and responsibility. It’s free of government cost and management. To make it illegal right now is both stupid and inhumane could at best be described as foolish, at worst inhumane.

The Tory proposals, whatever concrete form they take in law, will cost a packet to enforce. If you’er kicked out of your squat repeatedly then unless yer a real die-hard then you’re probably gonna end up on housing benefit. If even half of the government’s conservative estimate of 20,000 squatters were receiving benefits for housing, the cost would be around £50 million a year. The policing and court costs that would result from a change in the law (involving general enforcement, evictions, prosecutions and human rights cases) would also hit the taxpayer in the pocket. Squatters currently cost the taxpayer nothing.

Yer ever suspicious SchNEWS detects an ulterior motive behind the government’s plans, above and beyond protecting Mr&Mrs Semi-deatched while they’re in the Algarve for a fortnight? The law already provides virtually instant eviction for squatters daft enough to crack a family home - this is provided by clauses allowing ‘displaced residential occupiers’ and ‘protected intending occupiers’ to force entry if their homes are occupied.

The new laws are of course designed to protect the commercial sector - and would of course have the effect of criminalising all protest camps. It seems that certain sections of the Conservative government are either blind or uncaring as to the harm that this pandering to business and property-owners will cause to the vulnerable in our society. Squatters won’t be the only ones directly affected - SchNEWS gives it 24 hours after the law goes through before some dodgy landlord is using it to force through an illegal eviction with police assistance.

** To get involved in the struggle against the Tory anti-squatting agenda, check out the next Squattastic - info available from their blog, http://squattastic.blogspot.com