Britain is a country that is deeply divided by race. Not of course the crude racism of the Deep South antebellum but the echoes of the polite genteel racism that nevertheless produces hard structural inequalities is as real today as it ever was. The collusion with racism and the maintenance of inequalities based on skin colour regardless of citizenship or talent continues to blight the lives of millions of black people. 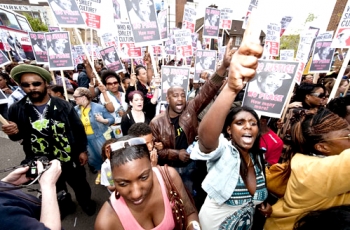 We are all sailing on the good ship Britannica Meritocracy but a few stroll on the upper sunlit decks taking in the fresh sea air while others labour to serve them on the middle decks. The majority of us sweat, bleed and toil in the steaming hot putrid slave galleys deep in the stinking bowls of the nation. Those of us who are forced to inhabit this rarely seen underworld of racism, poverty, political, social and economic exclusion rarely feel the warm sunshine of justice and opportunity on our faces.

Thus it has always been and maybe will remain so evermore. No starker contrast can there be between the black and white peoples of this nation. A nation divided by race and class, by faith and by gender. This happy isle of consumer fed contentment; fine rhetoric that extols our 1000-year-old democracy and the primacy of the rule of law is a racist nation hiding deep inequalities and flagrant abuses of human rights. Our battle with racism starts at the point of conception and only ends when we die.

Death is non discriminatory. Whatever our status or wealth, death comes to us all eventually and the great equal opportunities leveller in the sky renders all men and women equal in the final analysis.

However for black people even in death the inequalities and injustices can make themselves apparent. Take the case of two recently reported suicides in the news of late. One is Christopher Shale close friend of the Prime Minister and chairman of Cameron’s constituency party and the second is Demetre Fraser aka T. Dot a 21 unemployed black youth from Peckham.

Tragically Mr Shale was initially reported to have taken his own life at Glastonbury and then following further investigation is thought to have suffered a heart attack.

Avon and Somerset Police sealed off the area immediately preserving the crime scene and forensically examined everything looking for any evidence of foul play. They worked diligently to eliminate all potential possibilities and great care was taken to interview potential witnesses. A model investigation you may say and you would be right.

The second reported suicide of late and one that attracted virtually no press coverage is the case of a 21-year-old black man known on the road as T. Dot. He is reported to have been visited by the West Midlands Police on a routine visit. There was no warrant for his arrest and he was simply waiting to return to London after being on bail for a charge that had been dropped. T. Dot was simply waiting for the police to tell him he can go home.

The police visited his 11th floor flat in a high rise block in Birmingham and what happened next was bizarre. The police version of events is that they knocked on his door and heard shuffling inside. They say they then went back downstairs and as they emerged on the ground floor they saw T. Dot prostrate on the ground.

Their version of events was that T. Dot killed himself and committed suicide.

The scene was not forensically examined. Despite strong evidence of a violent struggle having taken place at the entrance of T. Dot's 11th floor flat and on 8th floor where a women hearing commotion opened her front door only to be told to shut it immediately and stay in doors by a police officer. Broken glass everywhere and lots of blood that was later cleaned up within minutes of the T. Dot's death.

Nothing was done to interview neighbours who heard shouting “No no…they are trying to kill me”.

The IPCC have said they are not investigating and handed the case back to West Midlands Police despite the overwhelming potential evidence of fowl play.

Two cases handled completely differently, two men an upper middle class wealthy white man and the other a poor ghetto rug rat. One demands press attention and professional policing the other gets no press coverage and the forensic scene is immediately washed down with Dettol. It smacks of a whitewash.

This is despite the fact that the police are already in the dock over the suspicious deaths of Smiley Culture and Kingsley Burrell the later who died after coming into contact with the aforementioned West Midlands Police. Birmingham has become the black male deaths in custody capital of the UK.

There can be no starker illustration of the disparity between black and white rich and poor. Whatever the protestations of the police there is as I have written here before a strong whiff of apartheid like justice in the way the police treat black suspects and victims of crime.

Institutional racism of the police is reflected in the British press. Contrast the media coverage with Shale and T. Dot.

If that does not convince you then maybe the fact the death of two police dogs received more press coverage than the death of a young T. Dot will illustrate my point further.

Wall to wall coverage in the printed press, mainstream news coverage and blanket coverage on the radio was given to the death of these dogs. It seems as if the British press have no interest in the black community and that black life is considered cheap in newsrooms around the country. Put simply the death of police dogs are more important than that of a black youth from Peckham South East London.

This weekend Saturday 2nd July will see the second national demonstration against black men dying in custody. On Saturday we march in relation to the death of Kingsley Burrell. Sadly the march in Birmingham will now take place against the backdrop of the death of T.Dot.

Returning to my earlier nautical analogy according to the captain of the good ship Britannica Meritocracy all is well. There will be those who stroll around the top deck oblivious as to what happens in the bowl of the ship.

That’s where we sit in growing malevolence and anger; where we remain unseen, unheard and largely unnoticed by those above. When rebellion breaks out no doubt it will be surprise to all.

You have been warned. Our community is at boiling point and to calm down that heated sense of outrage we need the cooling balm of justice. The mantra in black communities all over the country is best represented by the quote from Rev Martin Luther King who said:

“Without justice, there can be no peace. He who passively accepts evil is as much involved in it as he who helps to perpetrate it.”

That’s why were marching again, that’s why we are asking people to sign our petition demanding a public inquiry into all suspicious deaths in custody. That’s why we demand justice as a human right.

I will be marching on Saturday will you?