Building in Central Brighton Occupied in Solidarity with June 30 Strikes

The building had been empty since August 2010 and the occupiers are already making repairs in order to rescue the building from dilapidation.
The space will be used to form links between the striking public sector workers and other members of the public who are affected by the government’s public sector cuts, such as students, benefits claimants and private sector workers.
Starting June 30th, the day of the strikes, the space will be open in the daytime and used as a place for people opposed to the cuts in general to meet one another, drink tea, and find out about anti-cuts actions.
At 6pm everyday there will be an Anti-Cuts Forum, a public meeting open to all to participate. From 8pm until the space closes at night there will be film screenings and acoustic music.
Drugs such as Alcohol, Nicotine and Ketamine are strictly forbidden in the space, along with all forms of oppressive behaviour such as Racism, Sexism and Homophobia.
The space is non-party political and is open to anyone opposed to the government’s public sector cuts is welcome to the space at 29 Western Rd, Brighton, on the corner of Churchill square.
All enquiries to 07563696458.

New free space in Brighton - raising awareness about the cuts! 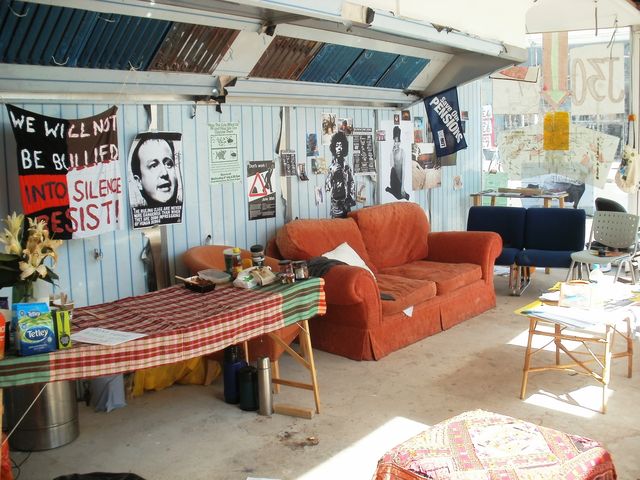 Whilst looking in the windows to see what this new free space was all about, I met *****, a really friendly young woman. She invited me to come inside and have a cuppa. She gave me a tour of the building and we chatted about the ethos of the project. There is a timetable of events being developed so that folk can drop by and check out what is going on. They are keen on making the space look sorted enough so that the average Joe Bloggs will feel comfortable walking in. Of course it's a shame that people are bigoted enough to be put off by anything 'DIY' but these guys are aware of it and are keen to raise awareness within the diverse community which makes up Brighton & Hove. So get along there and see what's going on for yourself. The J30 march was HUGE in Brighton and that is when this space popped up. If you don't want Cameron and Co to get away with making cuts which will affect the most vulnerable people then do drop-in and check it out.