Report: The US/NATO War in Libya

Cynthia McKinney Report on the Struggle Against the US/NATO War in Libya ... From Cynthia McKinney: A hearty group of protesters representing several community organizations showed up today to protest the vote of civil rights icon and Member of Congress from Atlanta, John Lewis, to continue funding for the bombing of Libya. The Congressman interrupted his schedule and heard the frustrations of his constituents who are outraged at the quiescence of Congress, the Congressional Black Caucus, and the Progressive Caucus in light of President Obama's policy to bomb Africa. 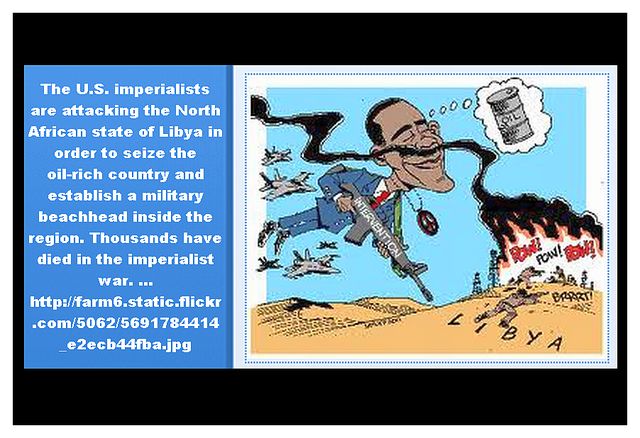 As we were meeting with the Congressman, President Obama was
addressing the country on national television defending his actions in
Libya. The Congressman reiterated his antipathy to war by saying that
war is obsolete.

The group asked the Congressman to be unequivocal in future votes and deny funding for President Obama's current wars.

Meanwhile, while we were meeting with Congressman Lewis, President
Obama was speaking to the nation.

Incredibly, the President demeaned
national and Congressional concern for his war policy as fuss by
saying, "A lot of this fuss is politics."
................. M O R E:

http://panafricannews.blogspot.com/2011/06/cynthia-mckinney-report-on-struggle_30.html
....... The Senate also called on Obama to announce that the U.S. will veto
any resolution on Palestinian statehood that comes before the UN
Security Council which is not a result of a peace agreement – and
asked him to “lead a diplomatic effort to oppose a unilateral
declaration of a Palestinian state and to oppose recognition of a
Palestinian state by other nations”.

AIPAC, which lobbied for the passage of the resolution, welcomed the vote's result.

Critics of the measure stressed that by cutting financial aid, the
U.S. might lose leverage over the Palestinians and might invite other,
less constructive players, into the game, as they have already lost
faith in the U.S. as an impartial mediator.

Silence is the deadliest weapon of mass destruction.
From Cynthia McKinney .........

Picture: .... Libya: Obamas oli sniff ..... The U.S. imperialists are attacking the North African state of Libya in order to seize the oil-rich country and establish a military beachhead inside the region. Thousands have died in the imperialist war. by Pan-African News Wire File Photos ........