Italy: civil war in Valsusa – Repression against NO TAV movement

After a crowded torchlight march on the night between June 26th and 27th, the Free Republic of the Maddalena in Piedmont was brutally assaulted by a full-scale military operation performed by around 2000 forces that turned the place into a battle site: teargas thrown at eye level, bulldozers and heavy vehicles used to evict the camp, water jets against protesters, beatings, tents and equipment smashed up. In the nearby town of Venaria, a riot police vehicle on its way to the site ran over and killed “by mistake” an elderly woman. 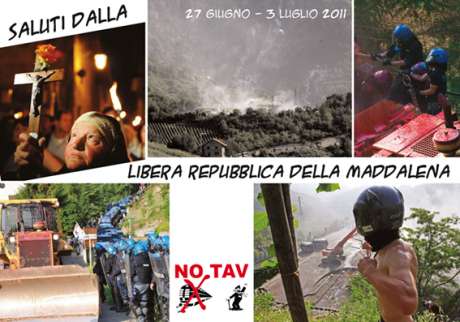 Greeting from the Free Republic of the Maddalena

Demonstrations, pickets and several other initiatives were organised all over Italy to show solidarity with the NO TAV movement that for years has been fighting against the construction of a high speed train line between Turin and Lyon in France. A national demo was called out for today 3rd July, and it’s still going on as I’m writing this. It’s about 8.40pm and it’s difficult to have a clear idea of what’s been happening at the Maddalena today, but what is clear is that there have been hundreds of people injured on both sides (but it’s only one side that I care about). Police have been using rubber bullets and at least one young man is seriously injured after being shot in the face. Protesters have compared the military operation to the repression in Palestine…check out some of the videos to make your mind up: video 1, video 2, video 3 (and more on the same website).

The Val di Susa (Susa Valley) has been one of the most important political campaigns of the last few years, organising resistance and fighting to protect the local territory and the locals’ health, that governments and companies would like to sacrifice once more in the name of profit. The TAV project (where TAV stands for High Speed Train) is basically a transfer of public money to a group of private companies united under the name Impregilo – multimillionaire companies such as FIAT, Benetton and others. After construction, these companies would be allowed to set up and run their own private rail service in competition with the State Railways (just in case they didn’t make enough money already). Despite not being finished yet, the business enterprise has already earned its contractors (all of which are millionaire businessmen) a very high income.

For a brief history of the NO TAV movement read my blog:

P.S. To watch the videos go onto my blog, I can't make the links work from here.