Bring your stove and tent for an anti-GM weekend. Fri 22nd pm: Camping available. Sat 23rd: Delivering a trailer load of organic spuds to the doors of the John Innes Centre in protest at GM potato trials there. Sun 24th: a day-long planning session: GM is coming back – we’ll be ready. See below for more information. 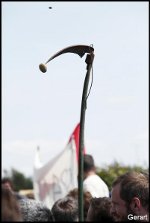 The Spuds Don't Work rally
The Forum, Norwich, 12 noon, Saturday 23rd July
British trials of genetically modified blight resistant spuds have been failing for the last ten years. But a conventionally bred variety of blight resistant potato has been available for 3 years. So why are we still paying for this dangerous experiment?

Come ride with us on the back of a trailer load of safe effective spuds as we go to deliver them to the Sainsbury Laboratory outside Norwich. It's one of only two possible open air trials for GM crops in Britain this year. Yet despite being publicly funded, it's so secretive no one will even say if it's been planted. Join us for tunes, chips and good cheer as we go and show them that we have already got the answers they say they're looking for.
Practical details
Meet at the Forum in Norwich City Centre at 12 noon for free chips and fun. We will set off from there to the John Innes Research Centre by bike, tractor and coach at 1pm. Bring waterproofs and umbrellas! If you would like to travel from town to the John Innes Centre by coach or if you want help finding accommodation (camping or otherwise) get in touch as soon as you can, and by Friday 15th July at the latest. Contact

info@stopgm.org.uk
Camping
Camping is available at the Norfolk Showground on the 22nd and 23rd July. Camping will be in the Red Car Park (note the Country Music Festival is taking part in the main showground). There will be access to toilets and drinking water. Arrive after 4pm on Friday 22nd. Red car park is to the east of the Park and Ride.
Bus: you can catch the Costessey Park and Ride to the Park and Ride itself (Mon-Fri). This service takes 20 mins and runs approx. every 20 mins from the bus station running via the university. Alternatively catch Konnect bus 4 from the bus station and ask for the Showground. This service runs approx. every 25 minutes. Buses run regularly between the train and bus station in Norwich.
Countering the GM come back summer camp
Sunday 24th July, 2011
A day long camp to get productive and plan the next stages of the campaign. Camping spaces available from Friday afternoon. Come equipped with a stove and food for self-catering. The site is five minutes from a regular bus route to the city centre. Contact

info@stopgm.org.uk as soon as possible and by Friday 15th July at the latest to let us know you want camping spaces reserved for you.
What we need...
...for both events...
You, and the people you know, and anyone you think might be interested.

This project is being worked on by Stop GM in conjunction with the Genetic Engineering Network. Several experienced grassroots campaigners will be working on the project from now until the event, but we need help getting the word out. If you think you could help by distributing email information about the event, dropping it about in any social media you may be involved in, letting your local growing projects or social justice groups know, distributing our 'Little Red Tractor and the Quest of the GM-free Spuds' leaflet or even organizing a coach to attend from your area, we'd love to hear from you.
For more information phone 07595 506673 or email

info@stopgm.org.uk. Visit www.stopgm.org.uk for more background information on GM and campaigning against it in general.

A tale of two spuds...
For the last 10 years, researchers at the Sainsbury laboratory at the John Innes Centre in Norwich have spent 1.7 million pounds of public money failing to develop a genetically modified potato resistant to the fungal disease blight. This project is so secretive and unaccountable that the laboratory has refused to even confirm if a trial has been planted this season, or if they've been forced to abandon any hopes of making the technology work. Public rejection of the risks associated with eating genetically modified food means that even if the engineering involved was successful, there would be no market for the crop.

Meanwhile, 3 years ago a small Welsh research charity dedicated to conventional breeding techniques developed a spud that is spectacularly resistant to blight. Not only does the crop pose no threat to health, the environment, or neighbouring farmers; it works. Over 6 different varieties are now available, and being grown on a commercial scale.
The rationale
The campaign against GM crops ten years ago was so successful that GM almost completely vanished from our fields and supermarkets, and many people have forgotten the issues associated with the technology. But in many other parts of the world peasant farmers have been desperately fighting its spread, and laws are changing in Europe that would make it much easier for GM to be grown in Britain. Despite pre-election promises to the contrary the coalition claims it intends to be 'the most pro GM this country has ever seen'.

Let's call time on an outmoded technology that continues to waste money in failing projects, while simultaneously threatening the very science that's actually producing working alternatives quickly and cheaply. For too long the biotech companies have gone unchallenged in their claims that GM can
create genuinely useful crops when in fact all the significant advancements in the last decade have come through conventional breeding.
With the renewed threat of GM on the horizon campaigners need to get together again to show the rest of the country (and each other) that we're still here, and we've got an even better case than ever. This is a chance to take the initiative with the media, to tell a story which explains clearly and practically why the pro GM lobby is wrong. That it's us, and not the corporations that have the answers to the food crisis.

http://www.gmfreeze.org/publications/briefings/99/ and how to get hold of the solution www.sarvari-trust.org.

Final details for the weekend

Preparations are going well for the Spuds don't work rally and Camp against the Come Back. As I type, the spuds (local,
organic, blight free - the spuds that do work) are being dug from the ground, and by Saturday they will be sizzling in the pan ready to feed you chips. The media may not be everyone's chosen game, but it is interesting to note that both ITN and the BBC have been in touch wanting pre-recorded television interviews, suggetsing they see this trial, and GM in general, as very much live issues again.

On a more practical note, here is some of the information we think you will need if you are coming.

What to bring:
* Camping things, including your own food, cooking things and plates etc. We will be able to make cups of tea for the Sunday but try to BRING YOUR OWN MUG even if you aren't camping
* Banners, placards, flags, umbrellas with slogans on, costumes, musical instruments and other items to make the rally a carnival.
* Your bike, if you can. There will be the option of getting a public bus or getting a lift in a vehicle from the centre of town to the John Innes Centre where the research is happening, but lots of us will be using bikes to get there under our own steam.

* Jonathon Jones from the Sainsbury Laboratory: a senior scientist responsible for this trial will come out to explain what he is doing and answer your questions.

Camping and Travel
* There will be camping at the Norfolk Showground - turn up any time from 4 o'clock on Friday. Camping will be in the Red Car Park (note the Country Music Festival is taking part in the main showground). A map of the Showground is available
here