On Saturday around 30 No Borders activists blockaded the detention centre and border police complex at Coquelles, a few miles from Calais. 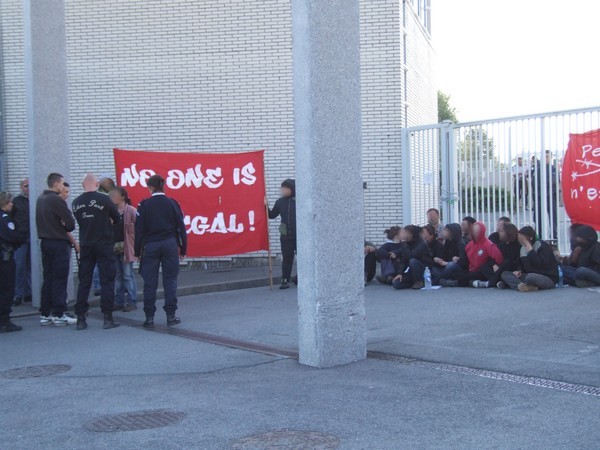 On Saturday morning around thirty people blockaded the main gates and entrances to Coquelles detention centre and police station in retaliation to the mass evictions and arrests of migrants in Calais and the ongoing abuses resulting from French and European migration policies.

At 7am two concrete barrels were rolled outside the main gates of the compound, four people locked-on while others chained together the front doors of the police station as well as the pedestrian gate. No Borders activists also surrounded the concrete barrels interlinked in a human chain. Attempts to barricade shut the front doors of the Tribunal (court building) were unfortunately scuppered by an early intervention of several police officers who happened to be outside smoking by those doors. But otherwise the police seemed taken by surprise, not used to dealing with situations of this kind.

After an hour and a half of the blockade, the first thing the police decided to do was and ID check of all the demonstrators; threatening to arrest people without papers (… of course this is what they do everyday in Calais). Afterwards the police began to break up the human chain formed around the concrete barrels protecting people locked on. They aggressively prized people apart one by one and dragged them away to a separate area. Two people who withheld their identity papers were arrested, and later charged with non-compliance. No other arrests were made. Symptomatically the only charges were against those who, in solidarity with people without papers, did not give their ID.

The PAF (police aux frontieres) complex at Calais contains the headquarters for the border police and CRS riot police, as well as the detention centre. This is where arrested migrants are brought after raids, then either processed and let go to walk the slow walk back to their shelters, or transferred to the detention centre to face possible deportation. The complex is also just next door to the big shopping centre by the entrance to the channel tunnel, so local shoppers and British booze-cruisers get to drive past the barbed wire fences every day.

more photos and info on the blog: