"...Liberty and Justice for all"? Prisoner Solidarity Protest, US Embassy,4 July

The London Guantánamo Campaign marked American Independence Day on 4 July with a political prisoner solidarity protest in the evening outside the US Embassy in Mayfair. Around 25 people attended. 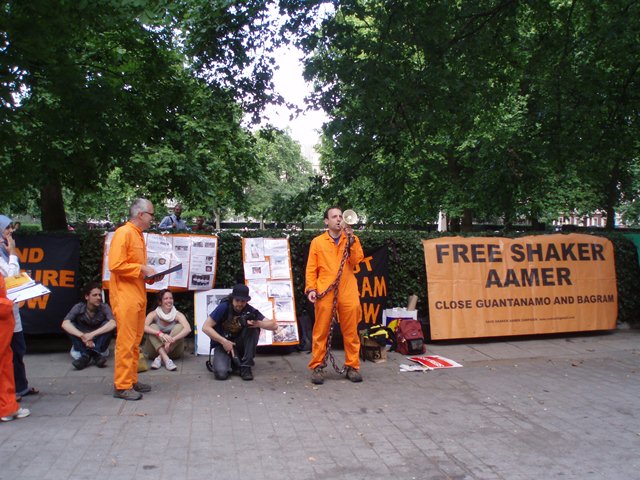 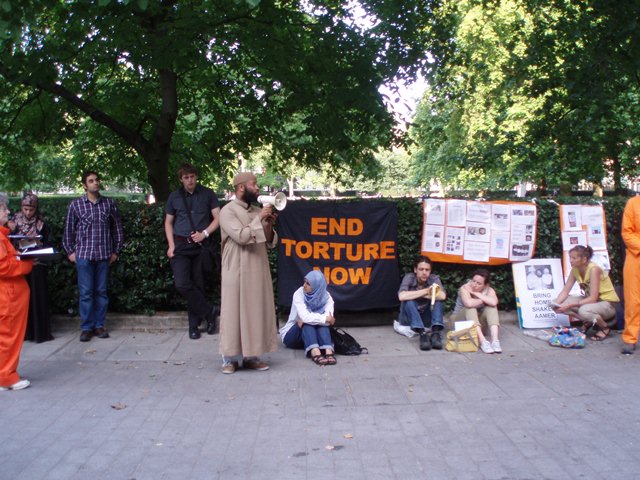 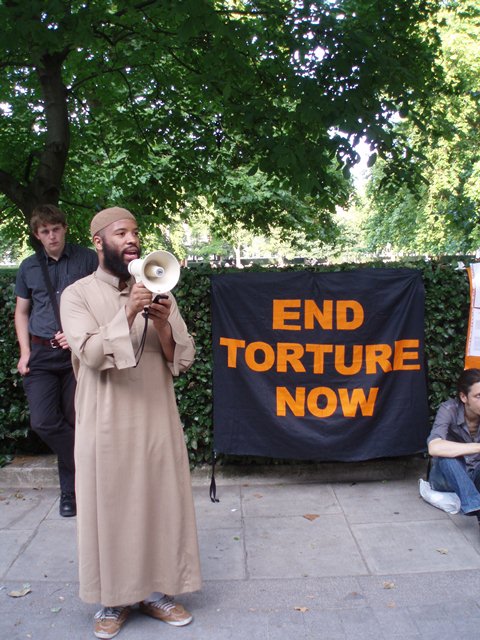 Ilyas Townsend from the Justice For Aafia Coalition 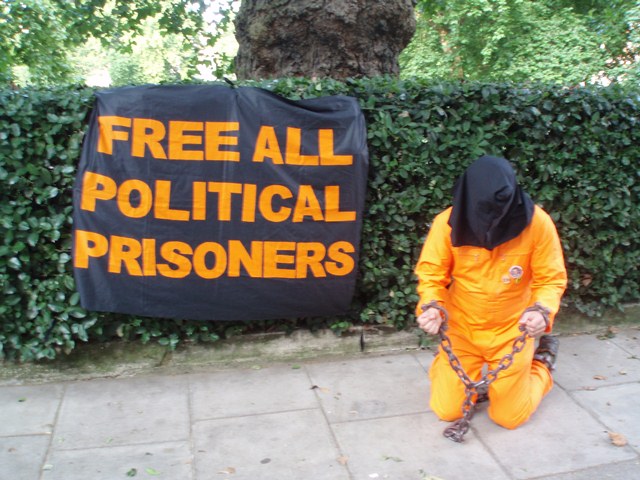 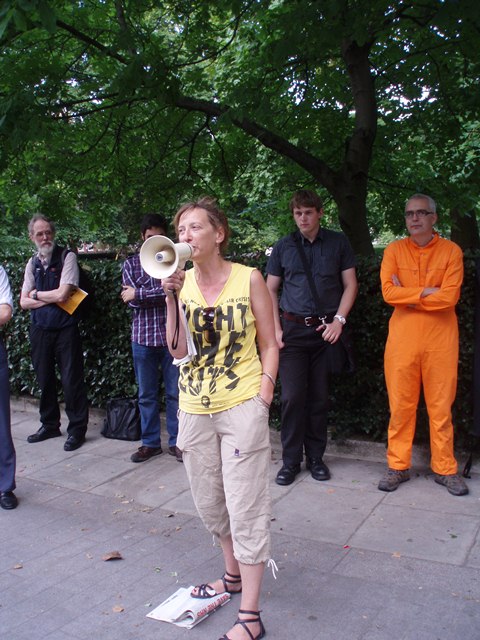 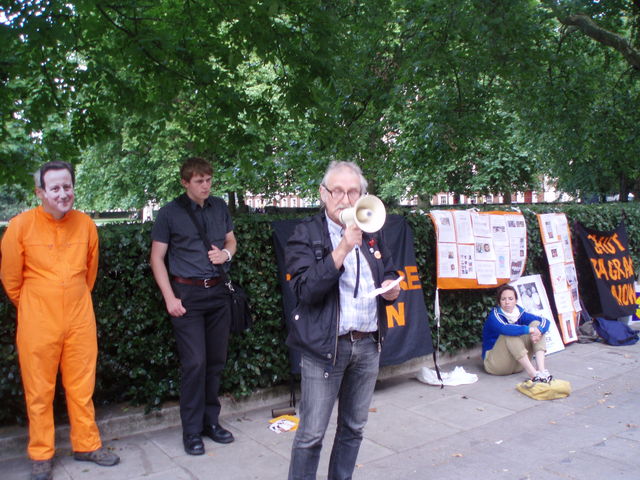 Ray Silk from the Save Shaker Aamer Campaign 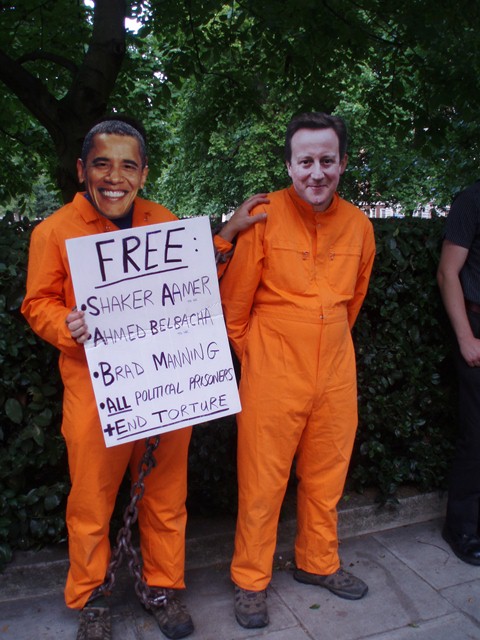 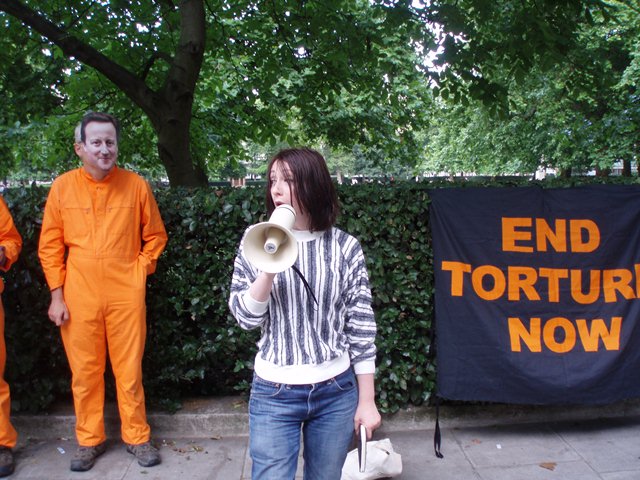 The London Guantánamo Campaign marked American Independence Day on 4 July with a political prisoner solidarity protest in the evening outside the US Embassy in Mayfair. Around 25 people attended.

Earlier in the day, a new statue of Cold War president Ronald Reagan was unveiled outside the Embassy. An inscription on the statue reads, in his words: “Freedom is never more than one generation away from extinction”. Along with “…liberty and justice for all” at the end of the American pledge of allegiance, these words are all little more than a mantra, contrasting starkly with actual US practice.

For prisoners at Guantánamo Bay, this has translated into almost 10 years of imprisonment without trial or charge. The story is similar for other prisoners held arbitrarily in Iraq, Afghanistan, Pakistan and elsewhere.

http://prisonerhungerstrikesolidarity.wordpress.com/ in particular an end to the practice of prolonged solitary confinement, whereby prisoners, particularly at harsh “supermax” prisons may not see another human being for years. These are the same facilities that were proposed to hold Guantánamo prisoners if transferred to the US mainland and would also house terror suspects extradited under the one-sided extradition treaty Britain signed with the US resulting in the 2003 Extradition Act, whereby individuals can be extradited to the US with the need for prima facie evidence to be produced against them. European law finds the conditions of prisoners held at such prisons to be inconsistent with human rights practice and in some cases tantamount to torture.

As well as protesting against Guantánamo, activists were joined by Ilyas Townsend from the Justice for Aafia Coalition (www.justiceforaafia.org) highlighting the hypocrisy of the US in its actions and the betrayal of its founding principles as a nation. US-educated Pakistani neuroscientist Dr Aafia Siddiqui “disappeared” with her three children in 2003 and was reported to be held in secret CIA prisons where she was tortured and abused until she reappeared in Afghanistan in 2008. Following a curious trial, in which dubious evidence was produced and most of the charges were dismissed, she was sentenced to 86 years last year for allegedly attempting to attack US soldiers during an interrogation in Afghanistan.

Nicki Jameson from Fight Racism! Fight Imperialism! reminded those attending that the British government too has a poor record on its treatment of political prisoners.

Naomi Colvin from the UK Friends of Bradley Manning (

http://www.ukfriendsofbradleymanning.org/) spoke about the harsh conditions alleged Wikileaks whistleblower Bradley Manning has been held in over the past year and the responsibility the British government has towards him as a joint US-UK national. Manning, who faces a series of charges and potentially the death penalty, has yet to face trial of any kind. An article published in the New York magazine published this week focuses on his story:

Ray Silk, from the Save Shaker Aamer Campaign (SSAC) (www.saveshaker.org), the last British resident recognised by the government held at Guantánamo, talked about the failure of the British and American governments to return him to his British family in the UK, even though things had improved under the Coalition government. He read out a letter sent by Joy Hurcombe from the SSAC to the press (unpublished) on 4 July concerning the new statue of Ronald Reagan:

“The statue of former US President Ronald Reagan unveiled today, July 4th, American Independence Day, in front of the US Embassy, is inscribed with his words," Freedom is never more than one generation away from extinction." How ironic that on this day, British Resident Shaker Aamer will mark ten years of incarceration in Guantanamo without charge or trial. The US cannot claim to protect human rights while it keeps prisoners in indefinite detention for years without hope of release. Reagan frequently warned that freedom should not be compromised by state control. He is known for his firm conviction that the advance of human liberty can only strengthen the cause of world peace. The US and UK Governments should take note of his words and act on them. Otherwise the ceremony today is just another sentimental celebration that conceals the truth.”

TAKE ACTION FOR THESE PRISONERS:
- Visit the websites mentioned above and write to the prisoners to let them know they are not forgotten and to show your solidarity
- Write to your MP (find them at www.theyworkforyou.com) and raise the issue of the remaining British residents in Guantánamo Bay, Bradley Manning and prisoners facing extradition to the US (details on websites linked above)
- Get your MP to sign EDM on 1093 on the closure of Guantánamo Bay:

http://londonguantanamocampaign.blogspot.com/2010/11/get-your-mp-to-sign-edm-1093-guantanamo.html and EDM 1624 on the treatment of Bradley Manning

http://www.parliament.uk/edm/2010-11/1624
- Add your name to our open letter to President Obama demanding the return of Guantánamo prisoner Shaker Aamer to his family in Britain:

http://londonguantanamocampaign.blogspot.com/2011/03/sign-our-open-letter-to-president-obama.html
- Join our next protest – this protest was a part of the monthly demonstrations the London Guantánamo Campaign has been organising outside the US Embassy since 2007 calling for Guantánamo and other illegal prisons to be shut and for justice for prisoners held there. Usually held on the first Friday of every month (next one is 5 August), please contact the campaign or check our blog – probably at lunchtime.