Yesterday three of Calais No Borders walked away free from the court in Boulogne, after the judge found no evidence against them on charges of "rebellion" and "illegal occupation" connected with resistance to a police raid on Africa House on 21 April. 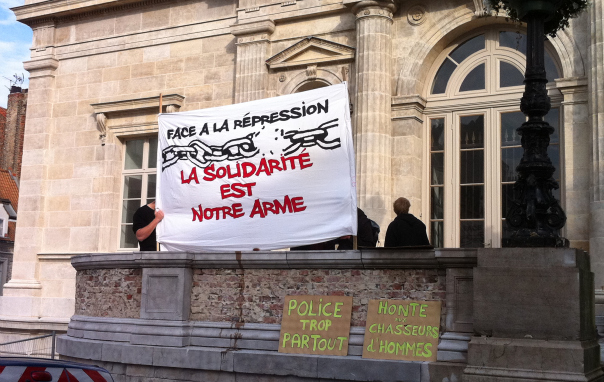 The charges came after a police attack on the Africa House squat at 9am in the morning on 21 April. As usual, a No Borders patrol was keeping watch at the barricades as 5 vanloads of border police (PAF) and CRS riot cops appeared. The watch gave the alarm so that residents without papers could escape onto the roofs, and then filmed the police activity with two video cameras. Just another regular morning in Calais.

That morning the police appeared particularly riled up: this was the first big raid since No Borders had released the "videos of shame" showing police harassment and humiliation tactics in Calais, which had been widely viewed across France and attracted national TV and radio coverage. It was noticeable that on 21 April the cops violently targeted the two people filming, attacking them and also the cameras, one of which was smashed beyond repair. The two comrades filming, and one other who went to their aid, were then arrested and charged with rebellion (violence against the police), as well as "illegal occupation" of the building, and then also with resisting being fingerprinted in the police station. (see report here)

Yesterday all three were acquitted on the charges of rebellion and illegal occupation. They were found guilty of resisting fingerprints, but with no penalty. The trial took place in the court at Boulogne-sur-mer, a town along the coast from Calais. Around 20 supporters came to show solidarity.

The trial follows another recent courtroom victory last month, in which three residents of Africa House were also acquitted of "illegal occupation" of the squat. These court judgments on "illegal occupation" may be significant for the future, as they seem to block an attempt by the state to criminalise the migrant squats in Calais. That court case also brought attention to the state's abuse of its legal obligations to refugees under "human rights" legislation: many of the migrant squatters in Calais have claimed asylum in France and are legally entitled to accommodation, which the state fails to provide. The last Africa House is now in the process of demolition, but migrants will keep on coming to Calais to cross the border, and keep on needing places to sleep and shelter.

However other activists have recently been convicted of "outrage" (insulting police) and criminal damage (graffiti), for which we face several thousand euros in fines. (See

http://calaismigrantsolidarity.wordpress.com/donate/ for how to donate!)

The struggle continues! People with and without papers, in Calais and across Europe, are building links and networks of practical solidarity and resistance, fighting together for freedom of movement for all. The border walls look tough, but they're full of cracks.