Three ballet dancers interrupted BP’s third and final Summer Screen in Trafalgar Square[1], 30 minutes before the scheduled broadcast of the opera Cinderella began. The disturbance took the form of a short piece of dance based on Swan Lake [2], with the classic tale used as analogy for BP’s controversial investment in the Canadian tar sands [3],[4]. The performance featured the White Swan being smeared by an oily substance and suffocated with a cloth. The crowd of opera-lovers were very receptive, greeting the grand finale with applause and cheers.

Charlie Byers, who played the prince, explained: “The tar sands are one of the biggest threats to the future of our climate [5]; they are also destroying local communities and wildlife, trampling indigenous rights, and running Canada out of water and natural gas. It is a key time to pressure BP to withdraw, as the corporation has already substantially invested in the tar sands but will not start profiting for years to come.” 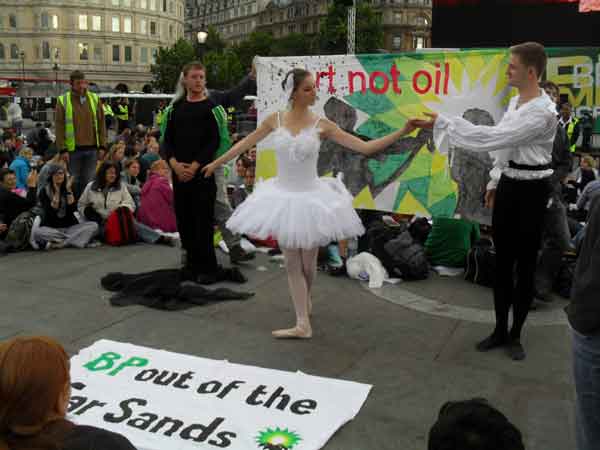 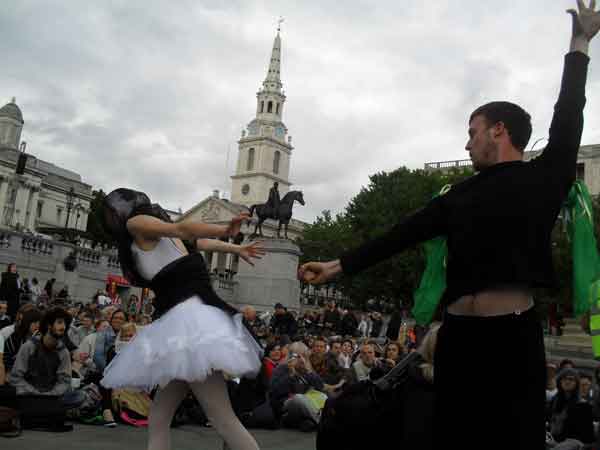 Emily Coats, a campaigner with the UK Tar Sands Network, who played the White Swan Odette, said: “Most people have never heard of tar sands, and BP would be happy to keep it that way. We used classical dance – an unusual campaigning medium – to introduce the issue to a new audience. The performance was meant to be enjoyed, but also to shock, with a visible struggle between a vulnerable creature and a powerful oil giant.”

Will McCallum, of campaign group Art of Activism, who played the ‘BP’ villain Rothbart, said: “By sponsoring the Summer Screens, BP is bringing art to thousands of people, but it is also creating a false image which hides its dirty investments. Public pressure has in the past caused institutions to stop accepting sponsorship from destructive companies. Without being able to put its name by our beloved cultural institutions, BP would suffer a real blow to its public legitimacy.”

[1] BP sponsors the Royal Opera House’s “Summer Screens” where ballets and operas are broadcast live in public spaces around the UK, including Trafalgar Square, for audiences to watch for free. The scheduled performance on 13th July was the opera Cendrillon (Cinderella).

[2] For a full synopsis of the piece, see bpwhiteswan.org

[3] BP announced in December 2010 its investment in the Sunrise Project, shared with Canadian company Husky Energy. Extraction is due to begin in 2014.

[5] NASA Scientist James Hansen has said that irreversible climate change is inevitable if all the oil in Canada’s tar sands is burned. See