At 10.30 am this morning Shell to Sea campaigners stopped work for the second day in a row at the Bord na Móna site at Shramore, near Bangor, Co. Mayo. They are currently on the site and occupying machinery. 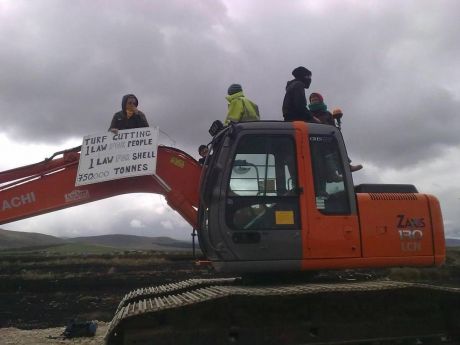 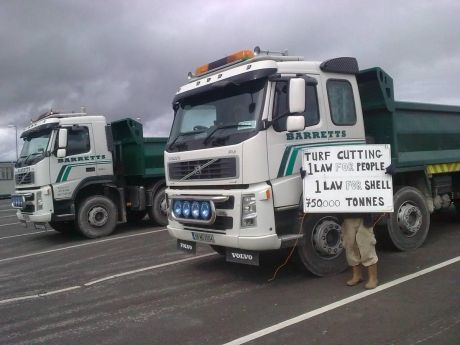 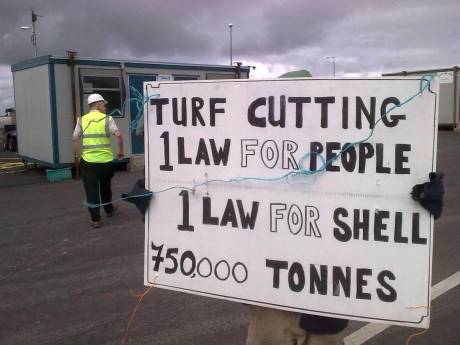 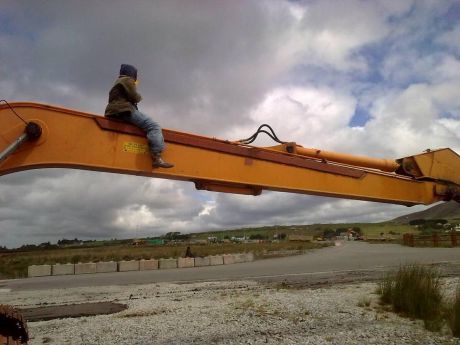 The site is currently preparing to store the 125,000 tonnes of peat that Shell will attempt to remove in the coming weeks. While rural communities are faced with a turf cutting ban, Shell is allowed to remove 125,000 tonnes from an area surrounded by EU Special Areas of Conservation, this on top of the 600,000 tonnes of peat that was removed during the creation of Shell's refinery in Ballinaboy. A banner saying "Turf Cutting - One law for people, One law for Shell" was hung on the gates of the Bord na Móna site.

'It's shocking to see Bord na Móna - a state owned company - facilitating Shell, despite the fact that Ireland does not own any of Corrib gas and so cannot benefit. Indeed a recent report by the Commission for Energy Regulation stated that Corrib Gas coming on-stream would actually raise gas prices for the Irish public' said Shell to Sea spokesperson Maura Harrington.

'Shell's so called environmental management plan was released to the public yesterday but completely fails to address the serious breaches of EU law. Shell also continues to ignore the community's concerns about the health and safety of the high pressure raw gas pipeline.'

Shell has announced its intention to begin peat removal shortly despite the An Taisce legal challenge.

Shell to Sea has stated that it will continue to resist Shell's Corrib project on the grounds of health & safety of the local community, protection of the environment and economic interest of the nation.

The Shell to Sea Campaign has three main aims:

1) That any exploitation of the Corrib gas field be done in a safe way that will not expose the local community in Erris to unnecessary health, safety and environmental risks.

2) To renegotiate the terms of the Great Oil and Gas Giveaway, which sees Ireland’s 10 billion barrels of oil equivalent* off the West Coast go directly to the oil companies, with the Irish State retaining a 0% share, no energy security of supply and only 25% tax on profits against which all costs can be deducted.

3) To seek justice for the human rights abuses suffered by Shell to Sea campaigners due to their opposition to Shell’s proposed inland refinery.

*This figure is based on the estimate, issued by the Department of Communications, Energy & Natural Resources (DCENR) in 2006, that the amount of recoverable oil and gas in the Rockall and Porcupine basins, off Ireland’s west coast, is 10 BBOE (billion barrels of oil equivalent). Based on the average price of a barrel of oil for 2010 of $79, this works out at $790 billion, or €580 billion. This does not take account of further oil and gas reserves off Ireland’s south & east coasts or inland. The total volume of oil and gas which rightfully belongs to Ireland could be significantly higher. Also, as the global price of oil rises in the coming years, the value of these Irish natural resources will rise further.