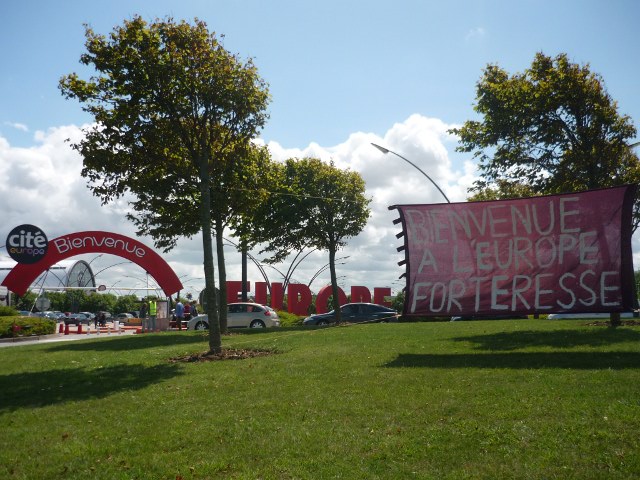 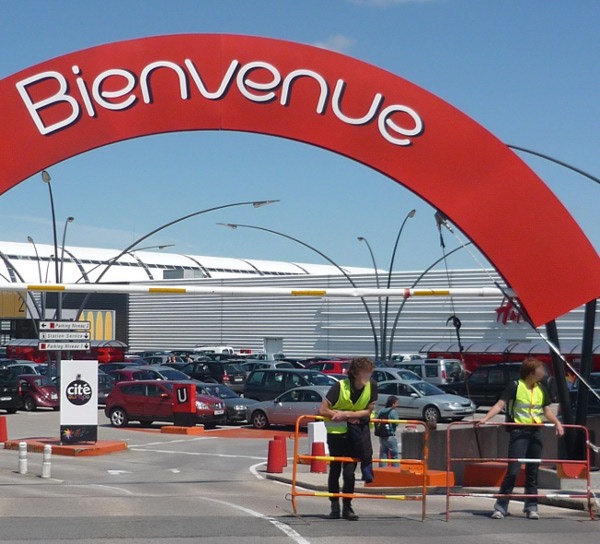 This afternoon over a dozen No Borders activists blocked both vehicle entrances into the City Europe compound, stopping shoppers and screening those trying to enter with rules almost as arbitrary as those used at real borders... checking the colour of their cars, stopping people wearing hats or glasses or with too many people in the car, seeing as Fortress Europe was getting full.

While people shouted 'contrôl frontière ici' vehicles refused entry were directed to Coquelles detention centre on the street opposite. After only several minutes some people trying to enter became very irate at the inconvenience this mock border control was causing to their afternoon shopping. However many people were receptive to the demonstration and its purpose and lots of leaflets explaining the situation in Calais were distributed, with people taking on board the point of the action.

Security and police arrived soon after and removed the barrier at one gate. Activists in high-visibility jackets continued to control and direct traffic for half an hour before being forced into the car park.

This fake 'control zone' demonstration mimics the farce of ID and border controls that segregate and persecute people because of their race, nationality and income.

Refugees here are being subjected to policies aimed at driving them underground and making them invisible. This normalization of state violence has been put in place by British and French governments. These people have often been displaced by the policies of these governments and are living not just the pain of the loss of the lives they left behind and the fear and uncertainty for their futures.

Unlike a demonstration preventing people from entering a shopping complex, the European policy of border closure is denying people the chance to escape danger and misery. During the last months an estimated two thousand refugees fleeing the war in Libya have drowned in the Mediterranean and rather than sending rescue boats, Frontex the European border force, has sent boats to push refugees packed into boats back to the Libyan coast.

In Calais over the last few weeks there has been a step up in the offensive against migrants starting with the eviction of Africa House – the shelter and home of around 100 people with and without papers – with mass evictions and the destruction of peoples homes and personal belongings.

After forcefully making people homeless, every place people move to, to eat, rest or sleep, has been subject to mass raids and constant harassment, leaving people with literally nowhere left to go.

No Borders denounce the compliance of the police and the municipal services with such barbaric orders and denounce the complicity of those who witness this and yet remain unquestioningly silent. We are all human. We must challenge the hypocrisy and segregation that border controls create.

No borders, no nations, stop deportations.