Gloucestershire's skies were darkened again by the Royal International Fairford Air Tattoo as some of the world's worst climate criminals and human rights abusers compared their best killing machines. This is an event about the glorification of everything that a civilised society should feel repelled about. Despite this, virtually every single newspaper, TV and radio show lavished it with praise. In so doing, they justified the entertainment budgets that the military industrial complex lays on at our expense. 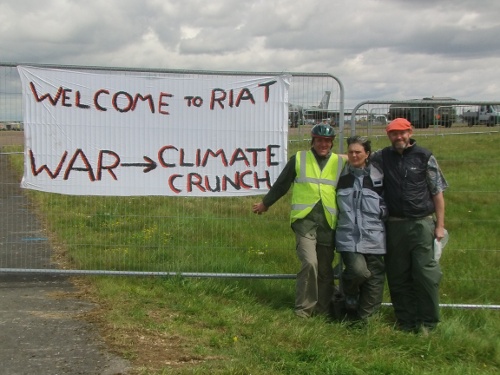 The Air Tattoo is the ultimate demonstration of how to layer corruption and hubris like the skins of an onion. Peel off one layer and you always find a stronger and more overwhelming smell in the layer beneath. This year 50 protesters started peeling apart the onion, one layer at time. They did this by distributing 10,000 leaflets on climate change and depleted uranium, offering free t-shirts linking climate change and war, raising funds for the victims of war and bannering the entrances.

The first layer of the onion is that simple stupidity of maximising fossil fuel consumption. At a time when we face climate collapse and when everyone is being urged to minimise carbon footprints we are forced to watch the military industrial complex make a statement that none of this is to be their concern. Worse still, the red carpet gets rolled out to the very companies that are doing so much lobbying and denying to stop climate change agreements. For example, Airbus were praised at the show by government ministers when debuting their new jets, but the same minsters are too scared to question the sale of A380 Super Jumbos as private jets to bored middle eastern billionaires and too scared to challenge the efforts of the aviation industry in stopping any climate change agreements. Yet, climate change is the fundamental thing that will determine our future security.

The next layer of the onion was the grandstanding of the A-10 ground attack plane. The A-10 is a plane specifically designed to fire depleted uranium munitions and its use has led to mass deformities of babies across Iraq. It is a clear violation of the Geneva Convention.

The leaflets handed out highlighted the depleted uranium disaster and so it was a sorry spectacle to see soldiers being placed at the ticket booths to attempt to remove the leaflets from visitors in a crude attempt at censorship. Hardly surprising they had to do this as the issue with depleted uranium could hardly be more important and more wrong. Its illegal use could lead to some of the most senior politicians in the UK and USA along with some of the most senior military commanders subjected to extended periods in prison; its clean up costs will bankrupt the UK and US economies and the conclusion that it leads to about the extreme danger of low level radiation makes the safety case for nuclear power virtually untenable with the present technological solutions. Finally, without the immense military advantage of depleted uranium weapons, the government would not be able to wage war as indiscriminately as it has done to secure the amount of fossil fuel that the richest in our society need to destroy our climate.

The next odious layer of the onion is the Air Tattoo proudly hosting the Saudi Arabian equivalent of our Red Arrows. Saudi is of course violating human rights in its own country and in its neighbouring countries, and trashing over every climate change agreement. Yet this little fact does not stop a string of arms dealers beating a path to their door at the show.

And just when you think it can not get any worse, it does. BAE Systems announced on Saturday a £7.2 billion sale of 126 Eurofighters to India. India is a country that Britain gives £480 million a year to in foreign aid. So we have our hard pressed tax payers in this country who are suffering public service cuts paying for the poorest in India, while India's richest get the protection of top range fighter jets. Meanwhile, the slight issue of India being in violation of the Nuclear Non-proliferation treaty is swept under the carpet and ignored; as is the idea that 126 Eurofighters stationed along the Pakistani border is going to do anything other than bring a devastating nuclear war considerably closer; as is the idea that Britian becoming the arms supplier of India is in any way compatible with making an 80% cut in CO2 emissions.

The Air Tattoo and everything it stands for should have been closed down long ago.

Player of Games and others