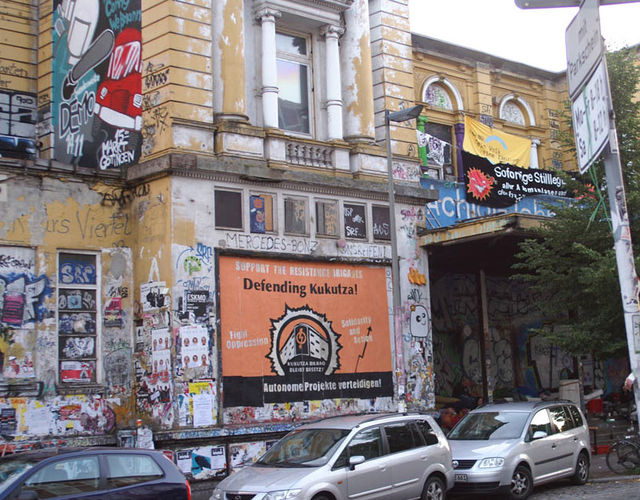 Since the beginning of this year, the Rote Flora in Hamburg is threatened by sale and eviction due to the formal owner’s announcement to sell the property profitably. The project has originated in 1989 from the resistance against the intended musical theatre “Phantom of the Opera” in the Hamburg quarter Schanzenviertel. For more than 20 years, it was able to refuse agreements and political misappropriation and to represent a politically disturbing factor as an autonomous squatted centre. To this day, Flora is both the point of origin of demonstrations and political intervention and a non-commercial location for parties, events, self-help and a meeting place for political groups.

In March 2011, the campaign “Flora remains disagreeable”* has symbolically smashed the register of real estate regarding Rote Flora and other projects. Therefore, we have clarified that the building which has been squatted for 22 years is symbolising a black hole in the order of ownership and doesn’t belong to anyone but to those who are utilising it. We want this state of affairs to prevail and won’t stay passive in case of potential eviction but will develop multi-level resistance.

In order to defend Rote Flora, we are not relying on participation models, negotiations or concessions of public institutions but on many people’s active solidarity. In recent months, solidarity events, various actions and an inter-regional demonstration mobilising more than 5000 people were taking place. To accelerate the conflict concerning Flora even more and pick up practically on the solidarity from other countries and cities we have been experiencing in recent months, we suggest an international day of action in autumn 2011.

For the appropriation of life and urban space

“Let’s combine the appropriation of spaces and resources with the defence of inner-city neighbourhoods against a policy of demolition! Let’s combine the initiatives of homeless persons with the resistance against evictions! Let’s strengthen tenant initiatives with vacancy campaigns! Let’s connect the opponents of environmental degradation with the fights of immigrants for their right of residence! Let’s broaden the space of action for civil disobedience by artificial and militant, clever and symbolic, virtual and direct actions!”
Theses to the congress “Right to the City” in June 2011 in Hamburg

The fight for Rote Flora is not an isolated affair, but embedded in border-crossing rebellion. Fight for appropriation is taking place in metropolises as well as in peripheries and rural spaces. In our view, the focus of the upcoming struggle for Rote Flora is not on the project’s conservation, but on its “disagreeableness”; the opportunity to position it with all its weight as a political factor in ongoing conflicts. We don’t want just one Rote Flora but many, the multiplication of disagreeable and autonomous projects and centres as locations of intervention in social struggles and fights.

With its desire for disagreeableness, Rote Flora is part of manifold movements developing in every space where there are people meeting each other critically and self-organising in everyday life against the illusion of capitalist inevitability. We are a picture from the future, but simultaneously we are part of the present permeating and constantly corrupting us. Domination does not exclusively arise from above but also from ourselves; not just from external constraints but also from internal comprehension and the activating momentum to participate in capitalist wonderland. We are part of an incessant production of goods, values and consumption needs. But exactly this starting point in the middle of given conditions enables us to sabotage and attack those circumstances: Countering the destructivity of oppression with collective processes of emancipation and subversion, creating temporary frictions, occupying the system’s gaps and blanks and inventing ourselves anew.

The conflicts, antagonisms and disputes we are encountering in defence of Rote Flora are corresponding to experiences gained by others fighting for housing space, against police assaults and displacement policy in urban streets. We are spectres in the here and now, refusing the logic of practical constraint, who are not to be gotten rid of and are revealing a completely different lot to be possible.

In capitalism, cities, houses, things and ideas are turned into commodities. From our perspective, they are part of the common wealth created by all and consequently all are entitled to them. We don’t need any real estate registers or price labels, neither police nor surveillance cameras ensuring things to remain as they are. Instead of social standstill, we count on movements running rings around the system. The objective of appropriation isn’t individual enrichment but expropriation resulting in collective re-distribution – a re-appropriation of things and therefore an appropriation of a life beyond norms, constraints and the misery of wage labour.

A day of theory and practice of social struggle

It’s a specific objective of the day of action to convey an impression of the inter-regional and international resistance which hopefully will occur in case of an attack on Rote Flora. We intend to rain on any potential investor’s parade and render eviction politically impossible beforehand.

As regards content, we don’t want to focus on Rote Flora itself, but on political issues being symbolised by it and on issues connecting it with your local struggles. Protest against gentrification and neo-liberal privatisation models, against police violence and displacement of undesirable population groups, against racist police checks and deportation; resistance against fascism, anti-Semitism, homophobia, sexism and capitalism in urban space. Thinking of and multiplying Rote Flora, there are many locations and types of intervention: Squatting, disturbing police checks, celebrating reclaim the street parties, designing billboards and banners, organising demos and all kinds of action. Certainly, you have much more imagination than we do.

On the one hand, we understand the day of action as an opportunity of creating a network, on the other, as a chance to determine by way of political practice focal points regarding content and their relationship with each other in other cities and countries. Where are there intersections in different local experiences and conditions? Where are discrepancies and where is something developing from these relationships which is possibly more than the sum of its parts?

A day of action, and an international one in particular, only makes sense when and if it’s supported by many. Therefore, we request you to distribute this call for a day of action and inform us up to August 22 if you want to take an active part or contribute criticism or suggestions. We deliberately didn’t yet fix any particular date, but will get back to you during September to fill you in on the feedback and relate the day of action’s exact date which is yet to be in 2011.