Huntington Lane protest site is facing imminent eviction. All legal papers have been served and a possession order for the land granted to UK Coal, so anybody who is up for spending time outdoors camping in beautiful woodland would be really welcome and appreciated right now. Whether you can spend a few hours, days or stay until the eviction, please, if you have the time to spare, come down and enjoy this space while it's still here. Even if you can't stay, there are plenty of opportunities for digger diving and other solidarity actions. All support welcome. 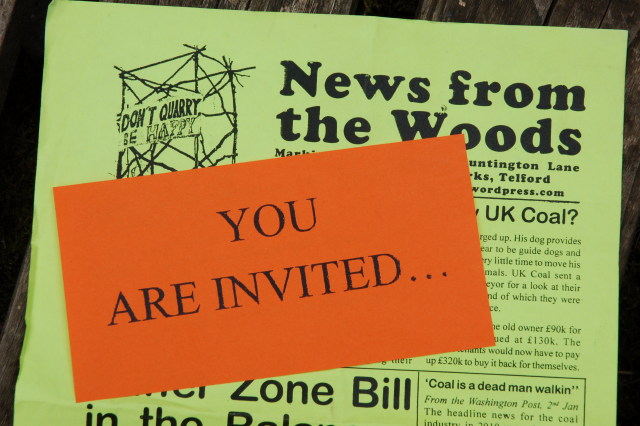 AN INVITATION FROM THE SITE

"Corporate greed plans to trash our amazing Earth again. Near Wellington, at the foot of the Wrekin, is a 230 acre site now in the clutches of UK Coal. It covers part of the Shropshire Hills area of outstanding natural beauty and encroaches on ancient woodland, which is popular with walkers and a host of animals including deer. They want to extract 900,000 Tonnes of poor grade coal, massively disrupting the villages and surrounding habitats. The protest site was established in March 2010 by occupation and defence of the woodlands.

"We are a sustainable, friendly eco-community and welcome new people."

Yourself! There is camping and crash space available.

On a bike:
From the station car park, go along The Parade and turn right into Victoria Road. Turn left into High Street at pedestrian lights (no left turn with a car - you have to cross the pavement). Cycle along High Street, which eventually becomes Mill Bank, and then cross the B5061 into Dawley Road. Continue along Dawley road, over the M54, then look out for a fork on the right, which is New Works Lane. Go up New Works Lane, past a few houses and a lot of hedges. Nearly at the top of the hill, you'll see 30mph signs just before the next lot of houses starts. The entrance to the site is on your right just before the first house. PS It's a lot quicker and easier on the downhill return journey!

In a car:
There's a bit of a layby on New Works Lane just before the site entrance (coming uphill) or a better one lower down the hill. Alternatively, the camp has arranged a space for people to leave their vehicles at The Haygate, Haygate Road, Wellington, Telford TF1 1QA. If you intend to leave your vehicle here, then please park near the recycling bank.

For maps and more information about getting to the site, see: