Last Saturday, a total of twelve people taking part in the Peace News Summer Camp visited Huntington Lane Anti-UK Coal protest site, situated less than 10 miles from where the camp was being held in Shropshire. Threatened with imminent eviction, the site needs your support and solidarity now. 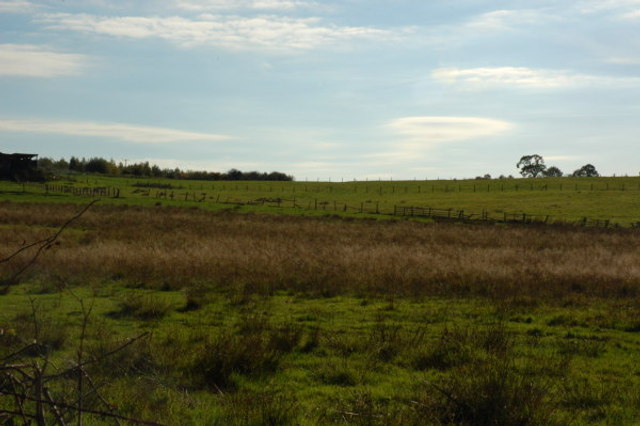 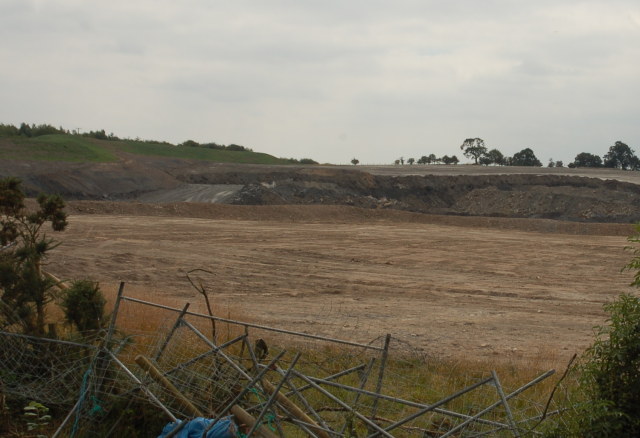 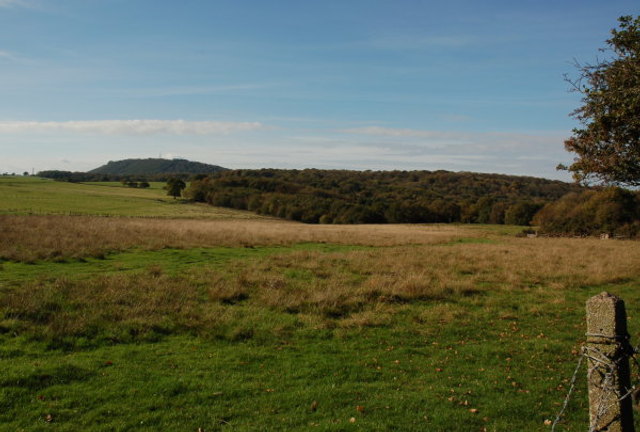 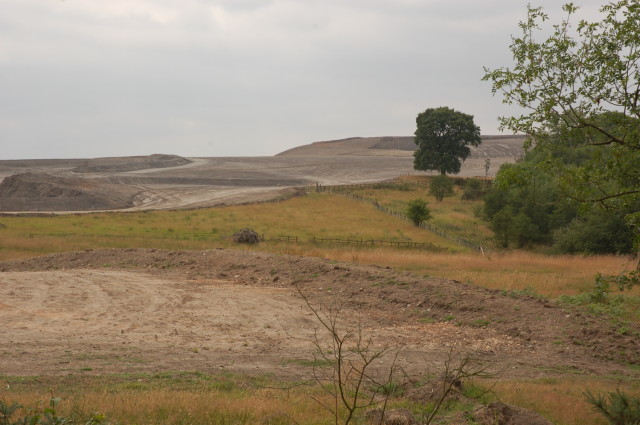 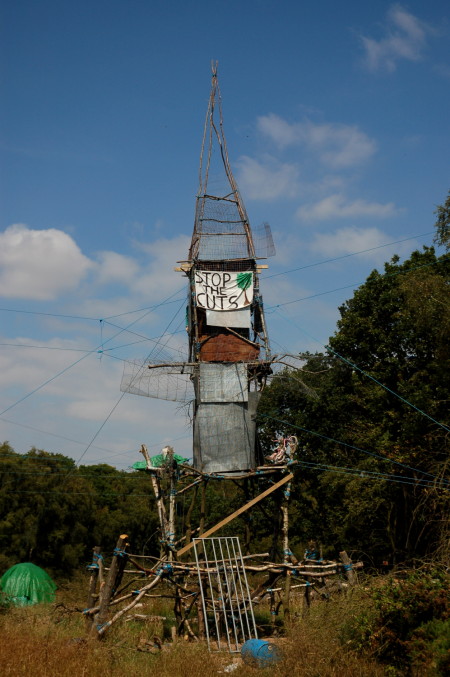 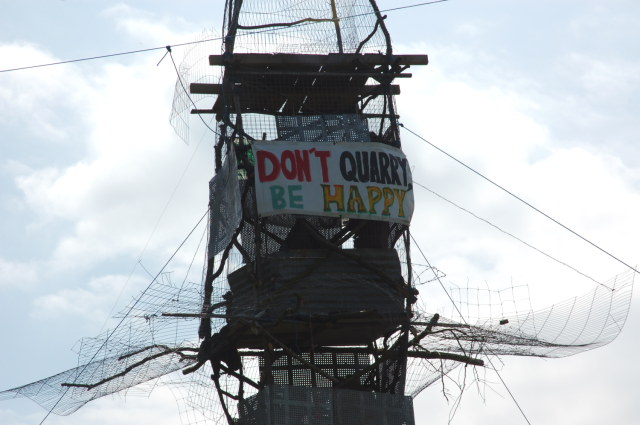 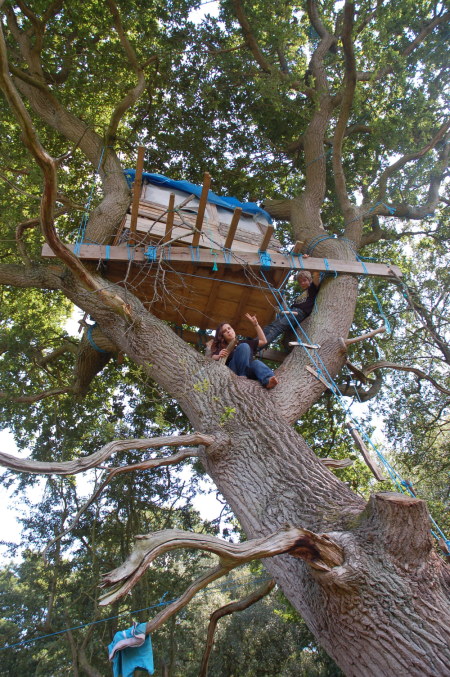 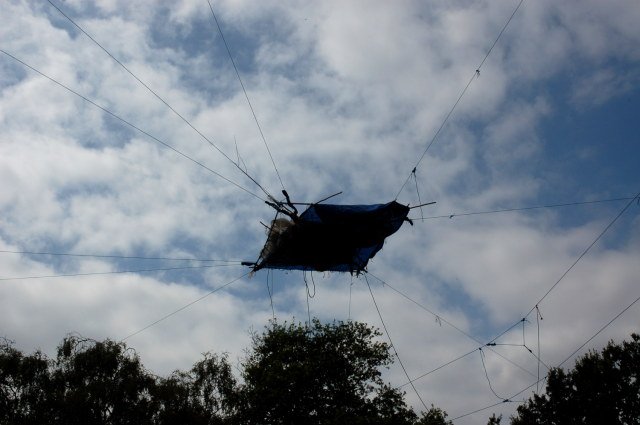 This was my second visit to Huntington Lane. First time round, last October, the site had been occupied for about six or seven months and the open-cast mining at the top (south) end of the site had yet to begin. The diggers were all parked up behind Harris fencing just off Huntington Lane, some preliminary clearance of the site had started and at least one footpath was closed for a 'temporary period' which the notice revealed to be nearly four years, but all the poor quality coal which is the target of this mining operation was still in the ground and the view from the camp was still decidedly green.

In order to better keep watch over the site, one of the communal areas has recently been moved to the top of the hill and looks out across the mine workings. I looked out and wished I hadn't: nine months on, the green fields have gone, in their place huge mounds of bare earth and a deep gash in the ground where the diggers are still working five and a half noisy days a week to get every last bit of coal out of this part of the mining operation. We arrived just after lunch on Saturday, so didn't get to hear what the site sounds like when it's in operation, but the occupiers say it's deafening and constant.

The protest camp is protecting the swathe of woodland which sits between the current mine workings to the south and the area beyond to the north, towards Wellington. People moved in to defend the site in March 2010 after trees in the middle of this area were felled in preparation for building the roadway which UK Coal plan to use to link the two sites, permission for access to the so far unmined area being via the current entrance on Huntington Lane. Many of the remaining trees are now occupied as part of the defences, which also include a number of towers constructed from the felled trees, extensive tunnels below ground and impressive wires and nets above.

Away from the mine workings, the site is still beautiful and tranquil and it's obvious why the Shropshire Hills Area of Outstanding Natural Beauty extends to this area around the Wrekin and rather less obvious why climate criminals like UK Coal have been allowed to trash it.

While some of the visitors went off for a tour of the site and a swim in a nearby lake, we sat and talked about the imminent eviction threat and what's needed: in short, more people. All the usual stuff to sustain a group of hard-working activists is of course welcome, but the urgent priority is to increase numbers pre-eviction, both of people to come and stay at the camp and of others prepared to visit and carry out solidarity actions.

These folk need support. Please get along to the camp if you possibly can. See this beautiful part of the world before it's gone forever. The more people are on site and visiting the site, the harder it will be to evict and the more it will cost UK Coal, already struggling financially and with mounting debts.

Entrance to the site is via a gate and stile on New Works Lane, 100 metres or so from the junction with Huntington Lane just past the houses (or just before if you're coming uphill).