Norwegian diplomat Jens David Breivik son Anders Behring Breivik ..... Norway massacres – zionist inspired „cultural conservative“ terrorism to take Europe to civil war ......... After the Oslo bombings the western society seems to be peculiar unwilling to take notice of the background of the attacks. Geir Lippestad, lawyer of Anders Behring Breivik, son of the retired Norwegian diplomat Jens David Breivik, who just killed 76 people in Oslo, told the Australian Associated Press on July 26th that „the whole case indicates that he’s insane“ and that he „has a view on reality that is very, very difficult to explain“. 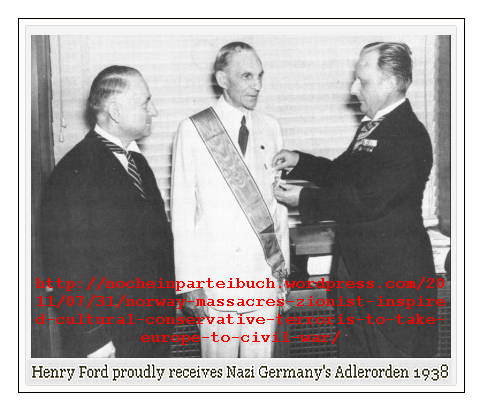 The view on reality, that is so „difficult to explain“, is explained in the same AAP message as following: He says he was on a Crusade to save Norway and Western Europe from a Muslim invasion and that the attacks targeting the Labour Party-led government and its youth wing were „cruel“ but „necessary“. „He believes this war will continue for 60 years and in 60 years this war will be won,“ Lippestad said.

Of course it’s hard to explain that people in the 21st century go on a crusade for 60 years and it is surely insane. However, Anders Breivik is apparently not the only one on a crusade. There’s for example Paul Ray, who blogs fighting against islam under the nickname of the ancient crusader King Richard I of England, and leads a group called „The Ancient Order of the Templar Knights.“ Paul Ray was formerly a leading head behind a group protecting „the inalienable rights of all people to protest against radical Islam’s encroachment into the lives of non-Muslims“ called English Defence League, or short EDL.

In it’s mission statement, the EDL describes itelf as a human rights organisation and declares that „it is time for the whole world to unite against a truly Global Jihad.“ This is quite similar to the believes of Anders Behring Breivik, who describes himself as a templar knight fighting a crusade against islam, but advises to use a public label of christian „cultural conservative“. In technics of ideology and camouflage, the EDL and Anders Behring Breivik seem to be almost identical. In their crusade for defending human rights against „radical islam“ the EDL uses most times the cross as their insignia, but they also march with the flag of their zionist allies. ....... more: