An Open Letter To City of Westminster Police

I am writing in response to recent communication from your 'counter-terrorism desk', which asked people to share information about anarchists. According to your info - which I note you cut and pasted from the first line of the 'Anarchism' Wikipedia entry - "Anarchism is a political philosophy which considers the state undesirable, unnecessary, and harmful, and instead promotes a stateless society, or anarchy." If that is your definition, then it's a fair cop guv, I am an anarchist, so I am doing my duty as a citizen by reporting myself to you, as requested. 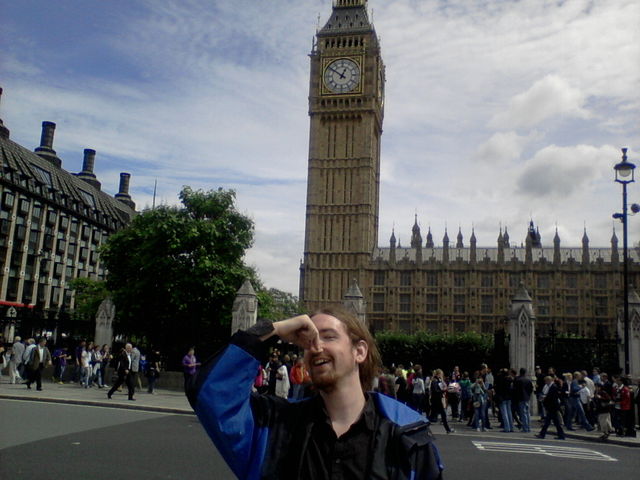 I was recently on your patch - if you will - as part of my thirtieth birthday festivities. On 20th July 2011, at around 12:50, I posed for a photograph opposite the Palace of Westminster - the mother of all parliaments - pretending to hold my nose. You see it was the day after the Murdochs had testified to MPs on the 'hackgate' saga - a case I know the Met are very familiar with, though I note you are yet to arrest either Murdoch. I was making a lighthearted visual comment on the stench of corruption that emanates from that palace, just as it does from Buckingham Palace, and every single palace you could care to mention. However, have no fear. I have no intention of blowing the place up. That would be such a waste. And besides, as the old saying goes, "you can't blow up a social relationship". Howard Zinn used to say that, and was "something of an anarchist", but he's dead now.

You see, the point you seem to have missed is that to be an anarchist is to criticise the social relationships that exist under capitalism, between the individual and the state. The word 'anarchy' comes from the Greek 'anarchos', meaning "without ruler". We would like a revolution. If that thought alone makes us criminals, then perhaps you have taken George Orwell's Nineteen Eighty-Four to be a training manual, rather than a dystopian warning. By the way, George Orwell wasn't an anarchist, but he did fight alongside some of them during the Spanish Civil War. Yes, I know, someone who wasn't a police officer using violence. But technically that wasn't illegal in Spain at the time, so if you really are fine upholders of the law I'm sure you would have been on the Republican side, against fascism.

Look, I'll level with you even further. I've learned not to like the police. I know what your real role is in society - to protect and serve the rich people who dictate the laws to the politicians. I know that as recession gives way to another great depression, and working class people self-organise in their own defence, you will take the side of the bosses, against your own ultimate interests. I know that you'll say to yourself that you're "just doing your job". I expect we'll meet again, though I don't know where, and I don't know when. On that day I'll wish we were friends and comrades, and you'll wish I'd just go away.

I think Durruti (he was definitely an anarchist) said it best:

"They persecute us. Yes, of course they do. We’re a threat to the system they represent. If we don’t want them to harass us, then we should just submit to their laws, integrate ourselves into their system and bureaucratize ourselves to the marrow."

I can't do that, so I'll plead guilty, though - of course - I'll reject the authority of the court.