Early Saturday morning anti-fracking [1] campaigners climbed 500 feet to hang two banners [2] from the iconic Blackpool Tower raising awareness about the dangers of hydraulic fracturing for shale gas spreading to the UK. The two climbers was were later arrested by police when they descended, but not before having their lives risked by Blackpool Tower workers who attacked them with a pressure washer while they dangled hundreds of feet above the ground. 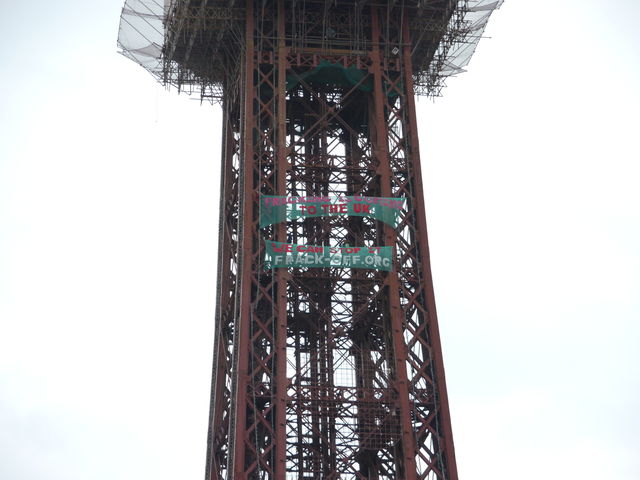 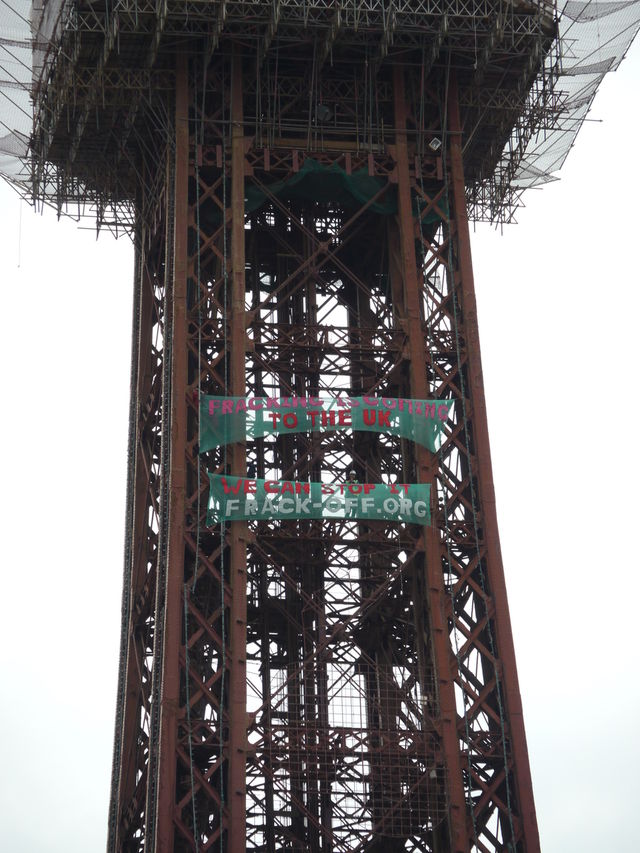 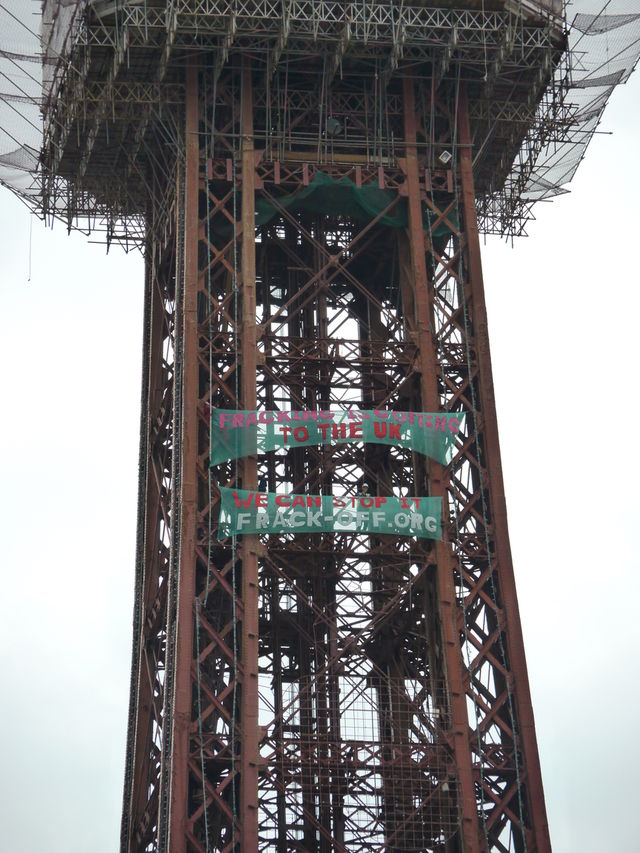 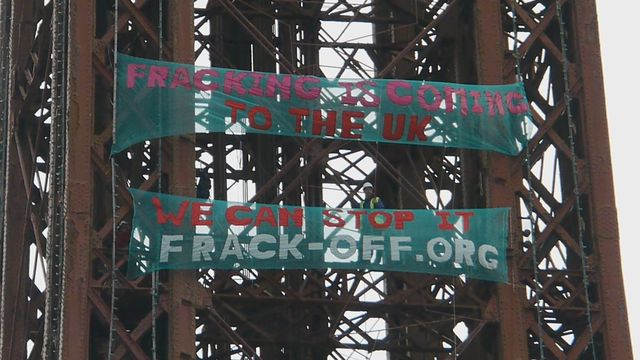 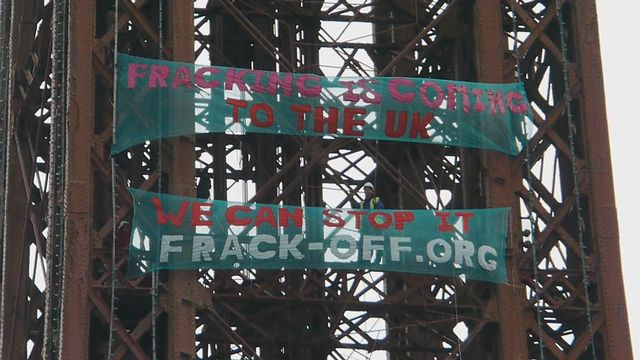 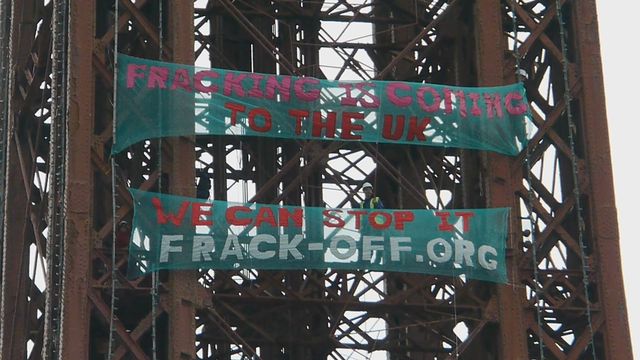 Blackpool Tower is five miles east of the first fracking test well in the UK. The group is highlighting the issue and launch of an anti-fracking direct action campaign centred around the website

Nathan Roberts, one of the climbers, said “There are so many things wrong with this unconventional method of gas extraction, it's hard to know where to start! It has been linked with poisoned water supplies, earthquakes, leaking gas and even radioactive contamination - and that's before you even get to the effect it will have on the climate. It’s unbelievable that they think they can get away with it. We can’t let this happen.”

Sami Jones, another climber, said "We hear a lot about energy shortages, but really we need to be investing in researching sustainable energy sources, rather than finding tiny pockets of non-renewable gas and destroying our planet in order to get to them."

Cuadrilla Resources [3] have been forced to temporarily suspend their exploratory test site at Preese Hall test well [4], near Blackpool following the outcry over two earthquakes in the vicinity, have in the meantime drilled another well and are presently moving their drilling rig to a third site. France, the states of New York and New Jersey, the Canadian province of Quebec and the Swiss canton of Fribourg have all recently banned fracking. Fracking needs to be stopped in the UK.

Notes:
[1] Hydraulic Fracturing (or ‘fracking’) is a method used to free otherwise inaccessible gas trapped in rock. Wells are drilled and 'fracking fluid,' consisting of millions of gallons of water, sand and a toxic cocktail of patented chemicals, is injected into the rock under high pressure to crack it. Some of these chemicals are known carcinogens and many are never recovered (

http://1.usa.gov/ftCV8J).
Fracking fluid also leaches radioactive elements and toxic chemicals like arsenic out of the rocks making disposing of the fluid a big problem. Fracking in the United States has already resulted in numerous spills of these fluids. Contaminated irrigation water could affect food supplies. Geologists have found a correlation between earthquakes and Fracking (

http://www.sott.net/articles/show/232634-US-Fracking-Operations-Cause-Thousands-of-Earthquakes-in-Arkansas).[2] The banner reads "FRACKING IS COMING TO THE UK. WE CAN STOP IT. WWW.FRACK-OFF.ORG”.
[3] Cuadrilla is a Shale Gas Exploration & Production Company (

http://www.cuadrillaresources.com)
[4] Preese Hall Test Well ‘is the second earthquake to strike Lancashire since April, and experts say it may be a result of the controversial practice, a process of drilling for natural shale gas which involves injecting water and rock-dissolving fluids underground at extremely high pressure to break apart hard shale rocks and release gas.Cuadrilla Resources, the company carrying out the fracking at Preese Hall, Weeton, close to the Fylde coast, said it had suspended operations to examine data collected by the British Geological Survey before deciding whether it was safe to resume. Neither quake was large enough to cause any structural damage’ (

that campaigners have to resort to scare tactics like these instead of presenting reasoned argument to the people in Blackpool.

PS - Most of Nathan's comments would not stand up against reality. Radioactive contaminatioon? Yeah, right.

What makes you think ...

the people of Blackpool need convincing that fracking is bad. It isn't like they got any say about it to begin with. As for radiation a quick google search contradicts you:

"The New York State Department of Health has identified Radium-226 as a radionuclide of particular concern in the Marcellus Shale formation deep beneath the Appalachian Mountains.

In hydraulic fracturing operations, drillers force water and a mixture of chemicals into wells to shatter the shale and free natural gas.

The brine that returns to the surface has been found to contain up to 16,000 picoCuries per liter of radium-226 (

http://treichlerlawoffice.com/radiation/nysdoh_marcellus_concerns_090721.pdf). The discharge limit in effluent for Radium 226 is 60 pCi/L, and the EPA’s drinking water standard is 5 pCi/L.

Uranium and Radon-222 have also been found in water returning to the surface from deep shale wells."

from the first link I clicked on:

Depends what rocks you have underneath you what nasty crap gets washed to the surface, mercury, arsenic, radium etc.

... will be found in igneous rocks, and then only rarely. As you say 'Depends what rocks you have underneath you'. So what rocks are off Blackpool?

democrap go nitpick& troll back under your rock please

Now that's what I call real intellectual debate. The pubs must be turning out.

democrap go nitpick& troll back under your rock please
james

Hey, if you wanna live by dumb science then thats your business. The rest of us would actually like to work with facts. Your attitude reminds me of when Green Peace said about cold fusion.... "we don't understand it, but we are against it". Do you know how much credibility they lost then. Made themselves look like idiots

And this 16,000 picocurio is a load of nonsense too. 1Kg of bananas has an average of 3520 picocurios. Last time i checked no-one got ill standing next to 5 kg of bananas in the green grocer! Your body contains about 120,000 picocuries

cripes, you got way more than that just flying in a plane. And what about wearing a glowing watch?

People like James are such idiots just for getting scared of numbers and not knowing what they mean and then just telling everyone is a troll like it is some kind of magic gotcha argument that will win everything. Idiot and he is a troll and he should go and troll in the sandpit with the other 4 year olds

voice of the truth

nitpicking genius, your arguments are so weak, get back under your toxic rock

nitpicking about radiation, which is only one of poisions that will definetely effect the area, great action,

you know your action's been successful...

...when all the trolls rush to try and discredit it!

Good action but be careful about facts

This was a good and worthwhile action, but having just had a look at the Fracking website, I'd say be careful how you present information so you don't get discredited as a bunch of climate change scaremongers. You can't "set fire to tap water" as it says in the first paragraph. You can set fir though to the methane gas that contaminates it. This is not nitpicking. It's possible for people to read up to the bit about setting fire to tap water, decide they're being conned because they know from life experience that you can't burn water, and the read no further.
Conditions in the USA are not like Britain. It is much less likely that companies operating in Britain would be able to get legislation through parliament that exempts them from environmental protection laws, such as those that make it illegal to contaminate water supplies. (I have just read the bit about the Haliburton Loophole, which exempts the comanies who carry out fracking from the law against contaminating drinking water.) People in the USA have less legal protection for their health and safety, and less expectation that the state will provide it.

but not before having their lives risked by Blackpool Tower workers who attacked them with a pressure washer while they dangled hundreds of feet above the ground.

anyway, they shouldn't of been up there. the protestors put themselves in 'danger' not the workers.
sick of hearing these protestors blaming the working class for everything

I would think that Blackpool's drinking water almost certainly comes from the Lake District.

Please tell us how methane, radium, radon, mercury et al can enter Blackpool's drinking water when the 'fracking' is happening in the Irish Sea.

this about fracking in uk, nottingham etc included

"democrat" is full of crap