Gaza Children's Artwork on Display in Chester: 'Loss of Innocence'

'Loss of Innocence: An Exhibition of Children's Art from Gaza' was on display in Chester city centre on Saturday 6 August as part of Palestine Day events. This report includes photos of some of the children's pictures on display in the exhibition.

More information and photos of the day here: 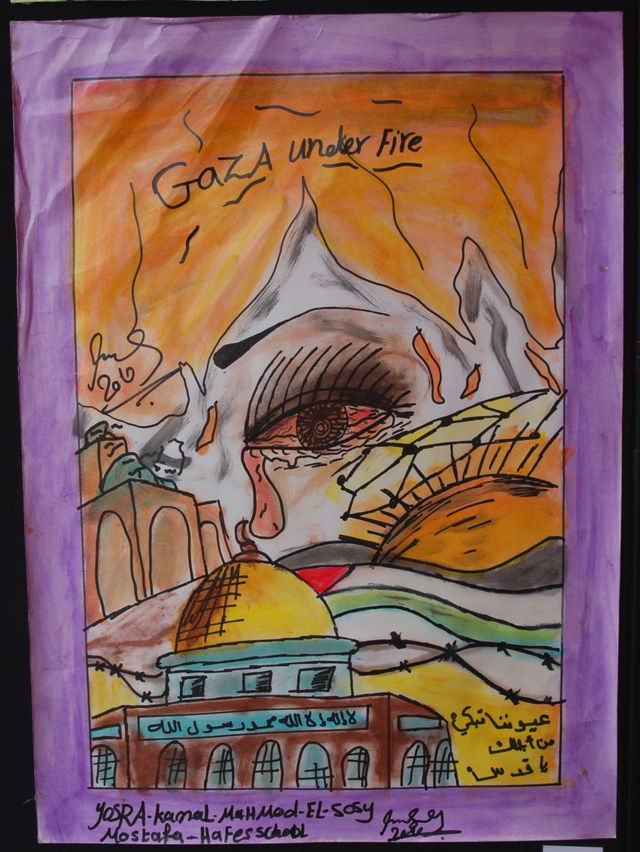 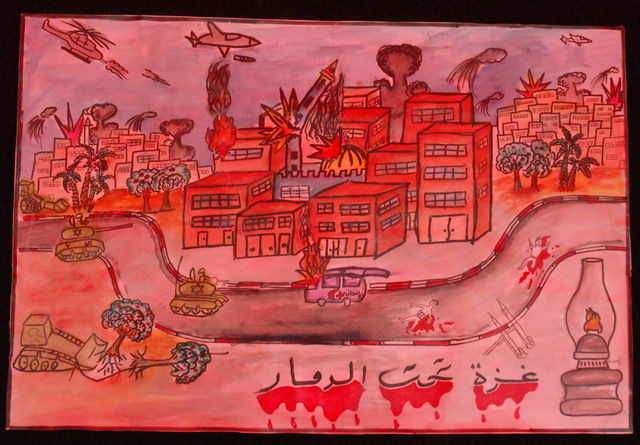 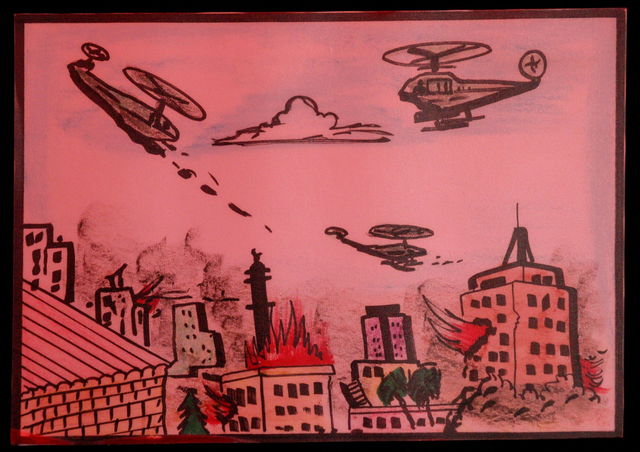 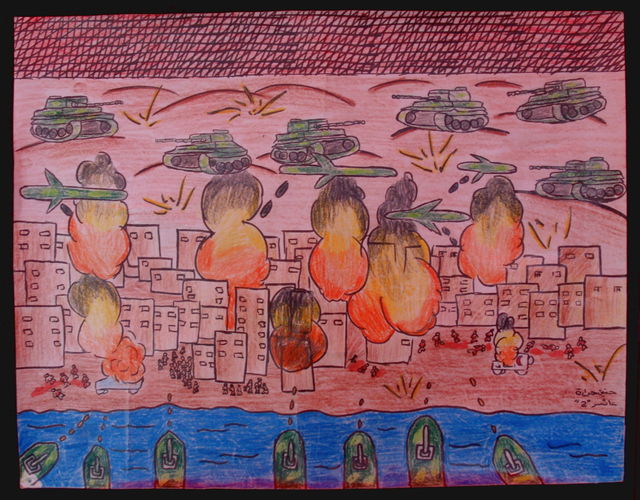 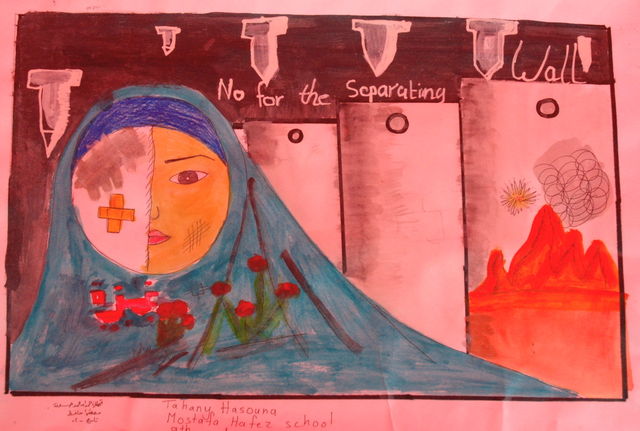 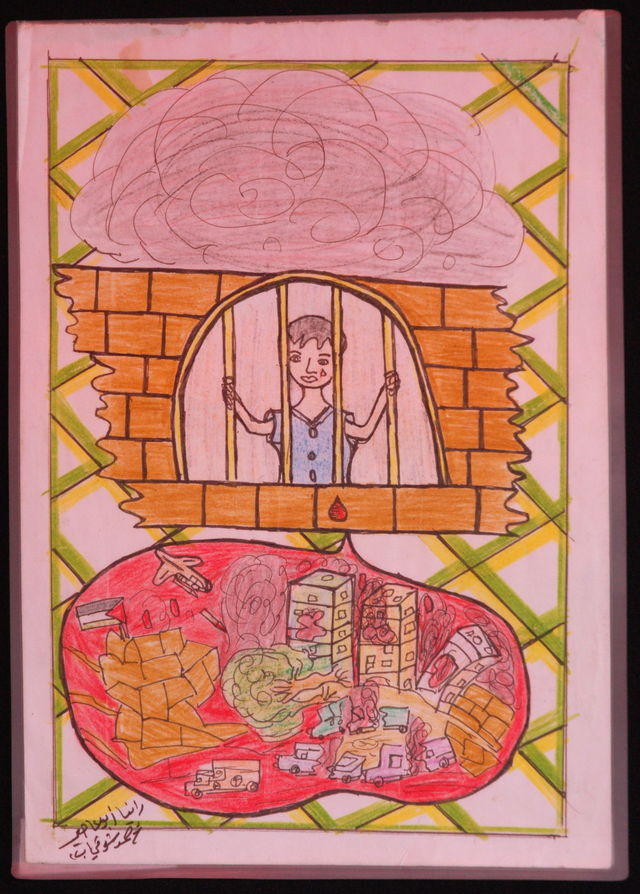 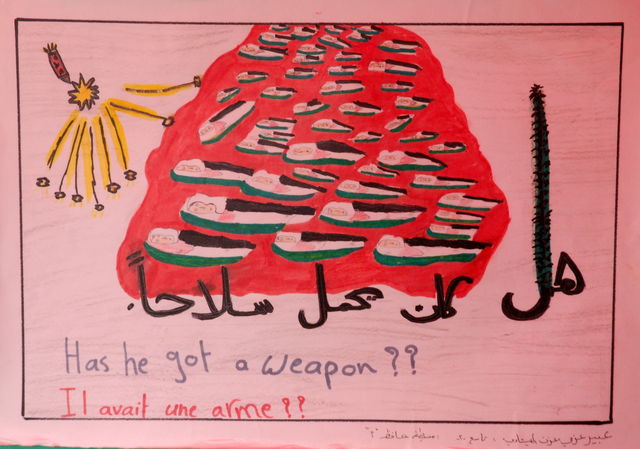 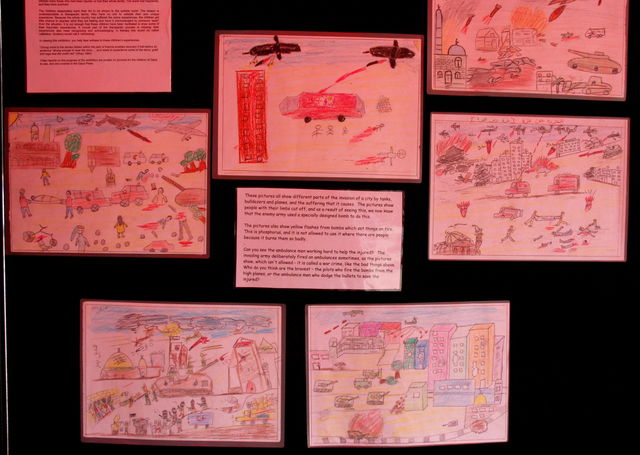 This was an exhibition of pictures drawn by children in Gaza in 2009, shortly after the attacks and invasion by Israel of Dec 2008 - Jan 2009 which, according to Red Crescent spokesperson Dr. Khalil Abu Foul, "did not just have 1500 killed, or 5000 wounded. It has traumatised the entire population, all 1.5 million."

There would have been more artwork in the exhibition, including a van completely painted over with graffiti by schoolchildren, but Egypt would not allow the van and its contents across its border. Some of the pictures sent out by courier were rejected by Israeli censors, but others were taken through tunnels into Egypt or brought out by the exhibition organiser Rod Cox, who has been touring the exhibition around Britain for two years.

More information, including details of how to host the exhibition, can be found here:

The display comprises some 50 pictures by children, with accompanying text, some of it aimed at adults and some aimed at children. Inexplicably, the first page for younger readers fails to name Israel as the aggressor, referring only to 'another country' and 'the other country':

"The children of Gaza want to make friends with children in what they call Britane (Britain). They drew these pictures to show you what happened to them when they were attacked by another country.

"Gaza is part of the land of Palestine, which is the place where Jesus was born and lived. It is on the Mediterranean Sea, and the West Bank which includes Bethlehem and Jerusalem.

"Many of the people in Gaza used to live in the land between these two parts. They were driven out in a series of wars. These refugees want to go back and there is still fighting between the two sides. The other country, which has a huge army with tanks and fighter planes, warships and helicopters, put a tall fence around Gaza, and the soldiers shoot anyone who tries to get out. Because Gaza is very small, only 7 miles wide by 20 miles long, it is very crowded with all the refugees and there is not much land for growing things, but the Palestinians grow as much as they can, and care for every bit.

"Many people have died because the fence stops people getting medicine or other necessary things."

I found the exhibition powerful and moving - a brutal war seen through the eyes of children at the receiving end. The pictures speak for themselves.