The police in Edmonton and Enfield last night had clearly lost control. As groups of young‘rioters’ carried out sustained and rapid attacks on predominantly corporate targets, and the police could do little other than race around town in a frantic attempt to minimise damage.
The police were clearly psyched up and frustrated that they couldn’t break more heads. One man, who happened to be both young and black, but in the area to monitor policing for the network for police monitoring, was arrested for obstructing police after he refused to give a name and address. In the back of the police van he was then repeatedly punched in the face leaving him with cuts, bruises and a bleeding lip.

If this is a typical example of how the police treat local black and working class youths – and there is every reason to think that it is – then it isn’t difficult to understand the anger and rage that exists. 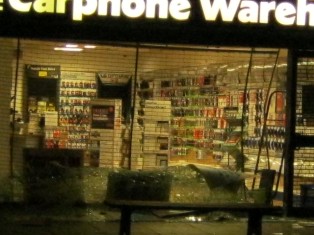 As well as the corporate targets the police themselves came under attack in a series of confrontations in Enfield town centre, and in Edmonton Green a police car was attacked and smashed, reportedly causing the police inside to run for safety.

Those out on the streets of Edmonton will inevitably be slagged off for the looting and indiscriminate attacks on property. But while there are reports of local businesses having windows broken, the focus of their attack was overwhelmingly the corporate giants. The large Tescos had its massive windows reduced to dust, causing a fair bit of amusement among passers-by. Carphone warehouse, Corals and assorted banks were other casualties.

It also has to be remembered that this is Edmonton, not the square mile. It is difficult to see how they could have done it differently, at least not without being completely ignored. And if the kids pocketed a couple of phones from carphone warehouse in the process, well good luck to them.

For the most part the youths were masked up and hooded, and moved fast, making it difficult for the police to act. FIT teams were out in their riot gear grabbing any opportunity to photograph anyone dressed in black, but they struggled. Having said that, arrests were made, and the cops reported 100 over the night.

Whatever the ethics of the tactics they used, it is undeniable that the police were stretched to breaking point. If this sort of unrest continues and spreads across London, the cracks are really going to show.


« Facebook site calling for photos of PSNI cops gets shut down.